And His Ferragamo Shoes

Gary Solomon Jr.’s fashion style is definitely casual. He wears jeans, cotton jersey shirts and loafers to work and is seldom seen in a designer suit, although you will find a good selection in the closet of his awesome apartment above the offices of the Solomon Group, the company he founded in 2009 with Stephen “Steve” Fink and Jonathan Foucheaux.

Gary’s sleek living space is just an elevator ride from his contemporary offices in an historic building on Perdido Street in the Central Business District. Although a casual dresser, Gary is still making a strong fashion statement with his everyday garb. His suede Ferragamo loafers are stylish enough for dinner at Antoine’s or a quick visit to Paris and a stay at the Ritz Hotel. “It’s all about comfort and durability,” he says. “My Ferragamos are a standard part of my working attire.”

Gary likes the slip-on, man-on-the-go feature of loafers. “I have about six pairs of Ferragamos and I especially like my gray suede loafers,” he adds.

It is easy to understand why Gary would be a fan of one of the world’s most famous shoe designers — Salvatore Ferragamo. Born in Italy in 1898, as a youth Farragamo studied shoemaking in Naples for a year and then emigrated to Boston in 1914, where one of his brothers worked in a cowboy boot factory. He joined his brother making boots and a few years later, both brothers moved to California, first to Santa Barbara then Hollywood.

In Hollywood he set up shop repairing and making shoes. It was only a matter of time before Ferragamo captured the attention of many Hollywood stars with his made-to-measure shoes that led to a period of designing footwear for the cinema. The lure of Hollywood eventually faded and he returned to Italy in 1927. He settled in Florence where he began to fashion shoes for the rich and famous – and the rest of his success, as the saying goes, is history. 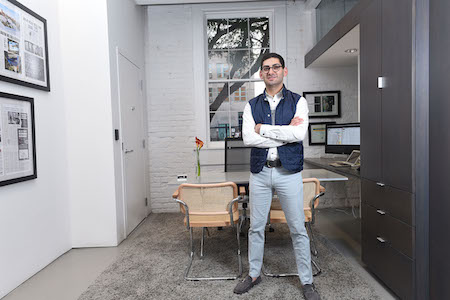 Ferragamo shoes seem apropos for Gary, who is proud of his young company that is projected to do $24 million in revenue this year. “We now have 200 employees and we are still growing,” he says. He notes with pride his company’s Easter project of being a major part of “The Passion,” the Fox television spectacular that was mostly filmed live from New Orleans on Palm Sunday. The two-hour musical event told the 2000-year-old story of the last hours of Jesus Christ’s life on earth. It was hosted and narrated by actor, writer, producer, director and New Orleans native, Tyler Perry.

“It was a tremendous challenge and our employees played an outstanding role in the success of the final production that featured a procession of 100 people carrying the 10-foot, illuminated cross from Champion Square outside the Superdome to the live stage built by our company at Woldenburg Park on the banks of the Mississippi River in the French Quarter.”

“The Passion” project was a typical example of the hands-on work performed by employees of the Solomon Group. “There is plenty of down and dirty work in our 65,000-square-foot studio and warehouses in Elmwood where much of our work takes place,” Gary says. He stresses that the studio functions as both a production space and a fabrication shop.  “So it is important to come to work ready to do whatever it takes to get the job done. I like to say we just roll up our sleeves and get to work. This is hardly a place for a suit and tie.”