For Chance and Chase Sylvain, Saturday, March 5th became a day they will not forget. That morning their mother Christal Sylvain, Principal of the John L. Ory Magnet School in LaPlace, told them that the day’s plans included a few hours at the airport in Reserve –but to their surprise, there would be a little more to it. Principal Sylvain had been in touch with Lt. Colonel Floyd Miles, a pilot for the “Golden Eagles.” Today would be no ordinary day at the airport.

Lt. Col. Miles, along with a number of his fellow Eagles, were spending the morning preparing small airplanes at the airport in Reserve to introduce young men and women to the wonder of aviation. Chase and Chance were soon in line with several other young adults awaiting their turn to take to the skies.

“I’ve passed the airport hundreds of time,” said Principal Sylvain, “but I really didn’t know what was back here. It’s wonderful that we have this airport in our Parish!”

Aviation is an applied science, meaning that flying incorporates several academic subjects, among which are science (chemistry, physiology, and physics), as well as the language of mathematics – and application brings subjects to life. Through flying, young students like the Sylvain brothers can come to appreciate the usefulness of these subjects at an early age. They are no longer words and numbers in a book. They are real and will continue to be every time they look up in the sky and remember their afternoon at the airport.

The Port of South Louisiana Executive Regional Airport, formally named the St. John the Baptist Parish Airport, has been transformed into an active business and general aviation airport. Featuring a longer runway and a host of other amenities, it is now attractive to a range of aircraft operators, be they small companies conducting business in the River Parishes, larger investing corporations operating executive jets, or the Golden Eagles, offering first time flyers like the Sylvain brothers the opportunity to experience flight first hand.

Flying brings an economic boost to the community because in addition to endeavors with River Parish businesses, passengers and pilots alike spend money on hotel stays, rental cars, fuel, and visits to restaurants and attractions. In response to the recent devastating weather, a number of helicopter operators hired to restore power and clear debris, based their operation at the Executive Regional Airport in in Reserve.

The Sylvain family, through a brief visit to the airport on Saturday, was introduced to the world of aviation in their community in a small but important way.

Mr. Joey Murray, Airport Committee Chairman for the Port of South Louisiana, was on site Saturday and said, “I think it’s an important step in our airport’s development when young members of our community witness and experience the practical use of airplanes. It’s the first step to understanding that flying does not always mean getting on a big commercial airliner. The use of smaller aircraft is known as “General Aviation” and it connects us to other communities, like our own, that are not served by airlines.”

Saturday’s “Fly-In” was hosted by a group of local pilots known as “Hangar 39.” On this particular occasion they generously provided drinks and a small fish fry to guests of the Golden Eagles and other pilots in attendance.

For more information on the Golden Eagles, visit their website GoldenEagles.org. The Port of South Louisiana has operated the airport in Reserve since 2010, when it was acquired from St. John the Baptist Parish and incorporated into Port operations. 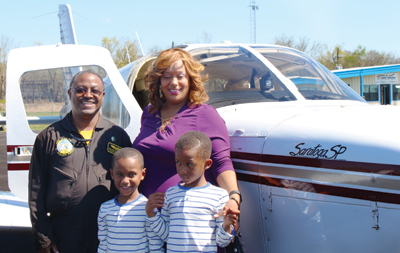