The latest news from the ports.

Both the Port of New Orleans and the Port of South Louisiana have experienced good news of late. Yet, even with the promise of newly inked deals and attention from international accolades, a great challenge — or, given the right perspective, a cause to champion — remains.

Two new agreements look to bring an immediate bump in activity and potentially hundreds of millions in total economic impact for the city’s port system.

During a recent interview with Biz New Orleans, Port of New Orleans President and CEO, Brandy Christian, explained that months of in-depth conversations with Dennis Wilmsmeyer, executive director of America’s Central Port (one of three public ports operating in greater St. Louis), identified “synergies” in terms of what cargo flows through both cities and where opportunities for new cargo exist.

Identifying untapped opportunities in coordinating the two regions’ supply chain led to a memorandum of understanding (MOU) signed on Feb. 23 between the Port of New Orleans and the St. Louis Regional Freightway — a year-old, public/private entity encompassing the region’s myriad shipping interests. The MOU seeks, in largely symbolic fashion, to bolster trade between the two historically and commercially connected cities, essentially, tapping into New Orleans’ strength as an export market and St. Louis’ import-container market and its access by rail and interstate to a large population.

“Absolutely it is beneficial to us,” Christian says of the MOU, heralded by the St. Louis Business Journal as a “major milestone” for the new Freightway. “It’s always good to utilize more of the Mississippi River, and this agreement opens up a large-population area and thus more customers. We see strong potential for shipping auto parts and rubber, given the Ford and General Motors factories in the [St. Louis] area.”

Not as traditional, but certainly still profitable, the Port of New Orleans’ stature as a hub for the cruise ship industry got a big (literally) boost when the Celebrity Equinox sailed into town over Mardi Gras.

Christened in 2008 and built to host 2,850 passengers, the ship’s maiden voyage to New Orleans bought the longest boat to ever dock in the city at 1,041 feet. More important to local coffers, however, are these numbers: The Port of New Orleans saw 4.5 percent growth in cruise ship activity for 2016, welcoming more than 1 million passengers for an estimated economic impact of $400 million.

“Celebrity is a higher-end cruise line, and we’re starting to see more luxury lines, the European lines, coming here,” Christian says, noting the local market’s diversification beyond Carnival Cruise Line and recent capital investments at its Erato and Julia Street terminals to meet current cruise ship needs. “New Orleans is a great attraction as both a destination and as a port of call.”

For Port of South Louisiana Executive Director, Paul Aucoin, the acceptance in March of the “Job Creation Project of the Year” award at the 10th annual Global Infrastructure Leadership Forum was not a time to celebrate, it was a call to action.

Congress authorized a channel depth of 50 feet in 1985, but inadequate funding through federal bureaucracies — namely the U.S. Army Corps of Engineers — has allowed parts of the river’s shipping channel, particularly at the mouth of the river where silt accumulates, to stay above the 50-foot threshold. With that level cited as crucial to grant passage for today’s large deep-draft vessels, a study conducted by the Big River Coalition and the Louisiana Department of Transportation and Development estimates 17,000 new, permanent jobs would be created in the state with the channel’s deepening to 50 feet.

Aucoin seemed to have his dream fulfilled in the first weeks of President Trump’s administration, when $1 billion for the project was listed as No. 7 on the list of the nation’s infrastructure needs. However, the shipping-channel’s champion at the White House, Ohio businessman Daniel M. Slane, ultimately didn’t land the position of special assistant to the president for infrastructure.

“D.J. Gribbin got the job,” Aucoin says of the former general counsel for the U.S. Department of Transportation. “I’m working to impress on him the necessity of this issue.”

Aucoin has some numbers to back his argument. He says it would cost an estimated $140 million annually to keep the river dredged to 50 feet. Balance that against a grain-elevator operator who, when shipping grain by the ton, can lose $1 million when the river’s depth sits at 45 feet. Multiply his loss by the 59,000 barges annually using the Port of South Louisiana.

“With all these restrictions we have based on the water level, we’re becoming unreliable,” he explains. “If we don’t fix this, these barges are going to find somewhere else to go. That’s why I’m not giving up until there’s money to have the river dredged to 50 feet — 50 feet all day, every day. And make sure the money is allocated to keep it that way.”

The Jones Act Has to Stay.

The Jones Act is not merely a set of laws that allows maritime workers to sue their employers. In fact, that is actually a very small part of what it does. The Jones Act is responsible, in large part, for keeping the maritime industry in New Orleans as healthy as it is.

Without the Jones Act setting the standard for maritime transportation to and from locations within the United States, companies would quickly outsource their transportation and shipping needs to foreign companies who are able to provide cheaper services by skirting safety, using unseaworthy vessels and not hiring trained, security-screened American workers.

The Jones Act keeps good jobs in Louisiana, protects our borders and homeland, and ultimately keeps our maritime workers safe.

Certain lawmakers from other states have recently attempted to repeal the Jones Act as “archaic” and “costly,” but their viewpoint ignores the importance of the Jones Act to the Gulf states’ oil and gas industry, to the maritime industry, to homeland security and to the United States economy as a whole, all for the selfish intent of shipping their non-petroleum products at a cheaper cost. 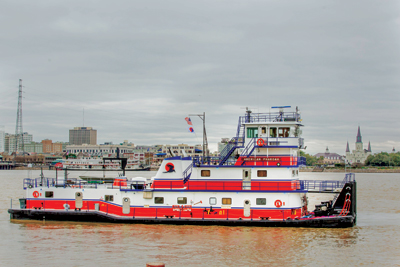 “When our company got started, we thought, ‘What should we name our vessels after?’” says Mario Munoz, president of New Orleans-based fleeting and shifting company Turn Services. “When we decided long ago to name them after Triple Crown winners, there were 11 Triple Crown winners. We never thought we’d have more than 11 vessels.”

Munoz describes the new tugboat’s namesake as “a very historic 2015 winner of the Triple Crown, as he went on to win the Breeder’s Cup and become the first-ever winner of the American Grand Slam of racing. We knew we had a special opportunity for naming our flagship vessel.”

Built in 1977, the refurbished boat measures 120 feet long by 34 feet wide with 4,000 horsepower. Operating on the Mississippi River between Baton Rouge and Myrtle Grove, Turn Services is now capable of moving commodities larger than its typical 12 to 15 barge tows.

The vessel is also dedicated to Turn Services Senior Vice President of Sales and Customer Service, Jim Buky, a 52-year veteran of the industry.