From the biggest international corporations to Louisiana-born small businesses, the state’s economic engine is moving at full-throttle

ouisiana has been at the forefront of foreign direct investment since the first French ships arrived in 1682. In this millennium, the Port of New Orleans and its collaborators continue to make Louisiana a strategic location for international trade and business expansion.

One key partner that has a statewide focus is Louisiana Economic Development (LED). In the first 100 days of Gov. John Bel Edwards being sworn into office in January of this year, the LED Office of Business Development secured eight project wins. Two of those wins were new companies, and the remaining six represent expansions of existing industry and retained jobs.

As of April 2016, LED teams were managing 53 projects in their pipeline, which represents $19.8 billion in investment potential and up to almost 14,000 new direct jobs.

Led by Secretary of Economic Development Don Pierson, LED has been instructed by Gov. Edwards to “ensure true long-term stability and continue to invest in the workforce and infrastructure that will provide the best jobs for tomorrow and raise the quality of life for all of our citizens.”

In a recent address Gov. Edwards said, “In Louisiana we enjoy one of the richest and most diverse cultural and recreational landscapes in the world. Louisiana in so many ways is the bread basket and the energy pipeline for our nation through what we grow here, through what we ship along the Mississippi River and through all of our ports, and through the extensive pipeline system that we have. We have an infrastructure that is really as advanced as any other network anywhere, but we have a lot of work to do to maintain our competitive advantage.”

Pierson and the staff at LED are doing that work and focusing on key areas, working in concert with regional economic development organizations and parish governments.

“We win when we recruit industry together, when we certify our sites, when we support small business, when we develop our communities, when we fashion a world-class workforce,” Pierson said.

Regarding international trade, Pierson stated that in the first 100 days of the administration, LED had met with Consular Generals from Canada, Mexico, France, China, Indonesia and Japan, and is working to coordinate inward business investments in Louisiana from those countries.

“It’s vitally important to have those relationships,” he said. “We’ve been fully engaged in the Select U.S.A. program. That’s the federal program to recruit foreign direct investment into the U.S. We’ve applied for federal funds to help promote exports out of our Louisiana communities.”

Pierson said the state has engaged international corporations that have new or existing expansions coming to Louisiana that total more than $15 billion and represent more than 16,000 direct and indirect jobs.

“Taking care of these international relationships is absolutely essential to growing our economy here in Louisiana,” Pierson said.

In its 2015 annual report, LaBIC addressed international trade and the role Louisiana’s ports play in the state’s economy. The report stated, “Trade-related industries supported approximately 524,960 jobs (one of every five jobs across the state), more than $32 billion in personal earnings, and $4.2 billion in state and local tax revenue. With $49.2 billion worth of goods exported in 2015, Louisiana continues to be ranked among the Top 10 exporting states.”

LED and LaBIC are putting an emphasis on attracting foreign direct investment (FDI). Recent noteworthy FDI projects in Louisiana include Sasol, Benteler and Gameloft, just a few of the companies that have invested billions of dollars in facilities and created jobs in the state.

Louisiana small businesses are also helping to fuel international trade in Louisiana. Shippers such as International Coffee Corporation, global coffee merchants, and Smitty’s Supply, a lubricant manufacturing and distribution company, as well as freight forwarders like Navivan, are small businesses that use the Port of New Orleans in their international supply chain.

LED is prioritizing the small business sector, noting that 97 percent of employers in Louisiana are small businesses, and they employ more than half of the private sector workforce. There are 11 small business resource centers located throughout the state, each offering programs to assist current businesses and entrepreneurs.

A Louisiana-based small business, Gilscot-Guidroz International, is a freight forwarder with global reach. Keith Guidroz Sr, company president, said his firm is able to compete with larger international companies by being active in the Freight Forwarders Association, monitoring rates and being savvy with technology.

He also pointed to the high-touch service his seasoned staff offers: “The personal service a smaller firm like ours provides ranks very highly with our clients and shippers.”

St. Bernard Parish is one of three parishes within the Port of New Orleans’ jurisdiction. There, the St. Bernard Economic Development Foundation (SBEDF) is working to attract and retain businesses of all sizes, but sees small businesses as especially important.

“St. Bernard Parish’s economy is dominated by numerous local, small businesses. Therefore, working with small businesses as part of our Business Retention and Expansion program is a top priority of SBEDF,” SBEDF Executive Director Andrew Jacques said. “We are thrilled with Gov. Edwards’ focus on small business in Louisiana, and we look forward to continuing our relationship with LED to unearth additional ways to ensure the health of our small businesses.”

Another focus for the current administration is investing in transportation infrastructure.

“We’re a great state in terms of our interstate international commerce and for that reason we need to invest wisely, soundly and extensively to build better and more connected communities that can attract investors,” said Gov. Edwards. “In order to attract new economic opportunities we have to invest in infrastructure to support such projects.”

Louisiana has applied for federal funds through the Fixing America’s Surface Transportation (FAST) Act, which the Governor said will allow the state to double its investment in the Port Priority Program and enhance Interstate 10 and Interstate 12, among others. This all has a direct impact on the Port of New Orleans and the international trade community.

“Working with partners at the state level is vital to the success of the Port which was recently named one of the fastest growing import and export ports in the United States by the Journal of Commerce,” said LaGrange. “Collaboration on past projects such as the Port’s new Mississippi River Intermodal Terminal, Julia Street Cruise Terminal, and the Henry Clay Avenue Refrigerated Terminal, and the procurement of gantry cranes keep us competitive for global trade.”

With jurisdiction in three parishes along the Mississippi River, the Port cultivates critical partnerships with organizations at the regional and local level as well. One such regional partner is Greater New Orleans Inc. (GNO Inc.).

The organization works with government and business groups to support economic development within Jefferson, Orleans and St. Bernard Parishes, in addition to seven others in southeast Louisiana. Most recently, GNO Inc. was instrumental in bringing Condor Airlines to New Orleans, which will offer nonstop flights to Germany and reestablish non-stop air service between New Orleans and Europe.

“This will strengthen our historical ties with Europe and improve efficiency for both Louisiana and European businesses, particularly in the petrochemical industry,” said Michael Hecht, President and CEO of GNO Inc. “The establishment of non-stop air service between New Orleans and Europe fulfills a top priority for our region.”

Further strengthening the Port’s regional partnerships, in May, 2016, the Board of Commissioners of the Port of New Orleans approved a resolution authorizing LaGrange to establish a Jefferson Parish/Port of New Orleans Task Force in order to work more effectively to advance economic opportunities that will benefit both parties.

In Orleans Parish, the Port works with city government, chambers of commerce, consulate offices and the New Orleans Business Alliance (NOLABA), among others.
NOLABA is the public-private partnership between the City of New Orleans and its business community.

“One of the things that NOLABA aspires to do is to more aggressively inform national and international business opinion leaders about the under-appreciated economic assets here in New Orleans,” said Quentin Messer Jr., President and CEO of NOLABA. “The Port is front and center as one such asset that we hope to more prominently position as we work to enhance New Orleans’ perception as a city for doing business.”

He added, “NOLABA is fortunate to have two Port Commissioners as board members, Michael Kearney and Greg Rusovich. Their leadership ensures we understand and can promote the tremendous economic impact of the commercial activity occurring ‘behind the wall’ at the Port of New Orleans.” 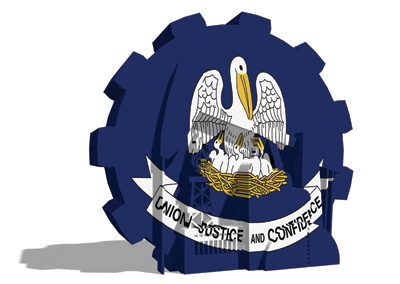 Area Development magazine recognition for one of the best economic development performance for the previous year. This is the seventh consecutive year Louisiana has won this award.

Southern Business & Development magazine ranked Louisiana No. 1 among Southern states in 2015 for attracting the most significant capital investment and job-creation projects per million residents.

Site Selection magazine’s annual Governor’s Cup rankings placed Louisiana No. 6 in the U.S. for states that announced the most new and expanded corporate facilities on a per capita basis in 2015.

Business Facilities magazine’s 2015 Economic Development Deal of the Year competition awarded the Formosa Petrochemical Corp. project in St. James Parish as one of the nation’s top three deals out of 30 submissions considered.

Site Selection magazine ranked Louisiana No. 4 in the magazine’s 2015 Top State Business Climate Rankings. It is the sixth consecutive Top 10 ranking for Louisiana in the annual Site Selection report.

Thumbtack.com gave Louisiana a grade of A on its 2015 report card on small business friendliness, ranking the state No. 4 in the U.S. for its supportive small business environment.