From the Swamp to the Stars 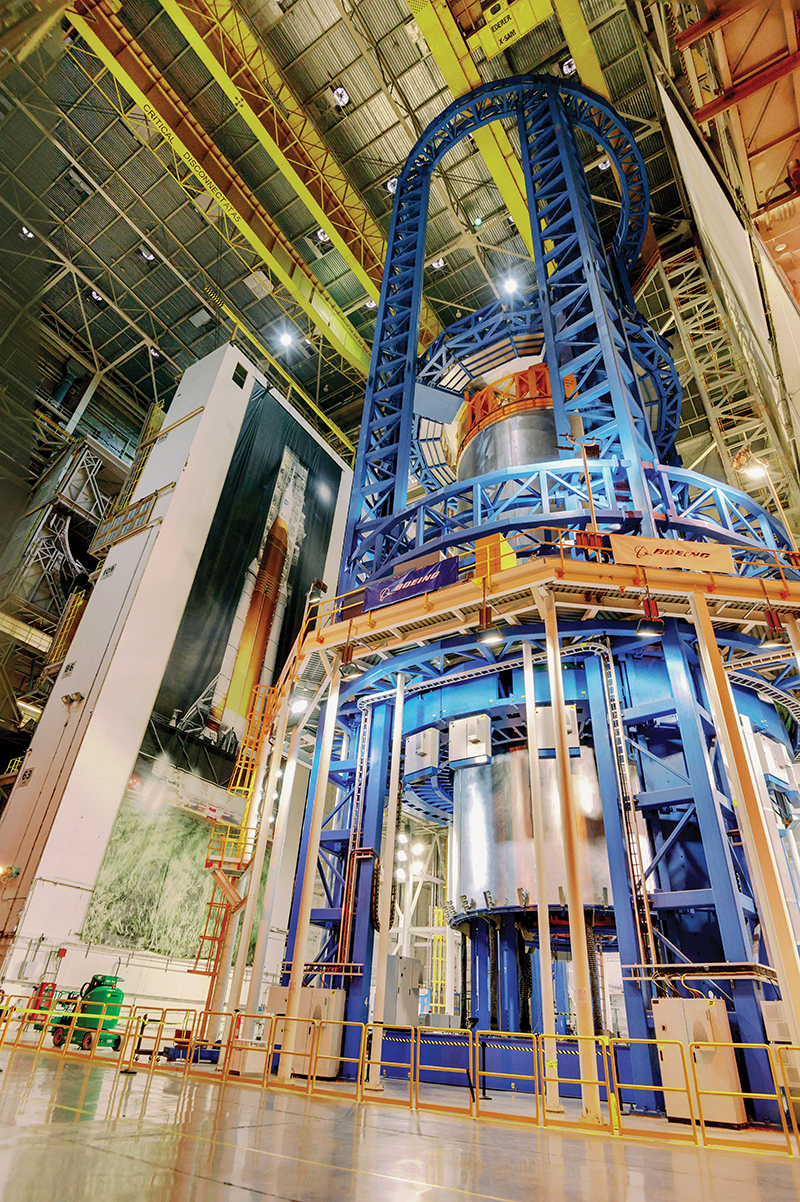 You may be surprised to learn that the key to mankind’s ability to travel to outer space lies in the heart of New Orleans East. For more than half of a century, the Michoud Assembly Facility, a manufacturing complex owned by the National Aeronautics and Space Administration (NASA), has been the nation’s “rocket factory,” where large-scale space structures, systems, and rockets are built and assembled.

“50 years ago, we wouldn’t have been able to land the first man on the Moon without New Orleans and Michoud,” said Lionel Dutreix, Deputy Chief Operating Officer of NASA’s Michoud Assembly Facility.

The Michoud Assembly Facility (MAF) has been an integral part of NASA’s space exploration missions since the beginning, from the Apollo program that took man to the moon and back, to the era of the space shuttle. As we enter the new age of the Space Launch System, MAF is tasked with manufacturing and assembling some of the largest parts of the systems that will take humanity into a new age of space exploration: beyond Earth’s orbit and into the furthest reaches of our solar system.

Michoud’s facilities are equipped with some of the most impressive and state-of-the-art manufacturing equipment, like the Vertical Assembly Center, the world’s largest robotic tool for building rockets. They have the latest materials, processing and production support to build and test the massive structures, complex components and full-scale hardware used in NASA’s exploration missions.

MAF is not only one of the largest manufacturing facilities in the country, but with 43 acres of environmentally controlled space under one roof (almost 2 million square feet), and deep-water access to the mighty Mississippi River that enables the transportation of the large space systems and hardware, it’s one of the biggest manufacturing plants in the world.

Situated on 829 acres of land, the site also includes more than 300 acres of green, unused space, so there’s plenty of prime land for new offices and manufacturing and test facilities to be built. MAF also houses other organization’s facilities such as the US Department of Agriculture’s National Finance Center, the US Coast Guard, LM Windpower who manufactures the advanced wind turbine rotors that are key to harnessing the wind for renewable energy, and Lockheed Martin. It’s safe to say that the future of the Michoud Assembly Facility is as bright as the stars their equipment will take us to.

The story of the Michoud facility begins with a large parcel of swampland granted from the governor of the then-French colony of Louisiana. On March 10, 1763, 34,500 acres of land were granted to Gilbert Antoine de St. Maxent, who built and operated a moderately successful sugar cane plantation there. By the time St. Maxent died in 1794, the plantation had been steadily declining in production and was sold at a public auction.

The land changed hands several more times until it was purchased by the son of Napoleon’s Administrator of Domains, Antoine Michoud, who revived and expanded the sugar cane operation into a successful venture.

When the United States entered World War II, the Michoud site was intended to be used for two defense projects. At the start of the war, a 1,000-acre tract of the plantation was selected and purchased by the US Maritime Commission as the location for a shipyard to build the Liberty ships that would deliver desperately needed supplies to the Allies in Europe. However, the shipyard was never completed and was taken over by the government, and Higgins Industries was contracted to build large plywood cargo planes for the war effort.

But when the plant was completed in October 1943, the Army had decided to drop the cargo plane program to focus on building bombers, and the plant was closed and assumed by the War Assets Administration, where it went unused. At the time, the Michoud site consisted of a 1.8 million-square-foot manufacturing facility, a 78,000-square-foot office building, and a 108,000-square-foot engineering building.

Early in the Korean War, it seemed the facility would finally be put to good use when the Army Ordnance Corps awarded a contract to the Chrysler Corporation in 1951 to use the facility to manufacture tank engines that were designed to power the Army’s Patton and Sherman tanks. The Chrysler Corporation even completely dismantled and relocated a foundry from Chicago to the plant site in order to construct the engines. They also designed and installed hundreds of tons of humidity-control equipment for the 43-acre structure. But by 1954, the plant was closed, and the sprawling facility lay dormant once again. The Michoud site, it seemed, was doomed to disappear into the Louisiana swamp.

All of that changed when the famed rocket scientist Werner Von Braun, then the director of the NASA George C. Marshall Space Flight Center in Huntsville, Alabama, brought NASA’s attention to the Michoud facility. Soon after, in September 1961, NASA announced their selection of the Michoud site for their new assembly facility. The site had everything they needed: plenty of production space, room for expansion and a prime location on the new Intracoastal Waterway that provided a water transport route to NASA’sl Mississippi Test Facility (known today as NASA’s Stennis Space Center), the rocket test-firing site on the Pearl River in Mississippi and the Kennedy Space Center launch site at Cape Canaveral.

With the space race with the Russians heating up, NASA used the facility to design and build large space vehicles. Chrysler and The Boeing Company started production on the first stages of Saturn I and Saturn V rockets at Michoud. The rockets that were constructed there were used in the Apollo program to propel mankind’s giant leap that allowed Neil Armstrong to take his small step.

As the Apollo program began to wind down in the 1970s, NASA shifted production to the next generation of space exploration vehicles: the Space Shuttle. In that endeavor, the Michoud facility would again propel mankind’s space exploration efforts when it began construction and production of the Space Shuttle’s external tank (ET) that contained the liquid hydrogen and liquid oxygen fuel to allow the shuttle to break free of the Earth’s atmosphere.

Even the devastation that Hurricane Katrina wreaked on New Orleans and the Gulf Coast in August 2005 didn’t stop production at Michoud. Thirty-eight NASA and Lockheed Martin employees stayed behind during the storm to keep the pumping systems operating, saving the facility from destruction. They pumped more than one billion gallons of water out of the facility and are the reason that the factory suffered very little damage and was able to resume production by October of 2005 without disrupting any of the planned shuttle launches.

Dutreix is proud of the people who stayed behind to keep the facility safe. “All 38 employees were awarded the NASA Exceptional Bravery Medal, NASA’s highest bravery award,” he said with a smile.

Building the Future of Space Exploration

The Michoud Assembly Facility is building on its long legacy of successful fabrication and manufacturing of large, complex hardware for NASA flight programs to help create the next generation of space exploration vehicles. The experience and expertise gained from building the Saturn rockets for the Apollo space program and the external tanks for the space shuttles have proven highly beneficial to the Space Launch Systems’ (SLS) core stage development and manufacturing. After all, they don’t call it NASA’s Rocket Factory for nothing!

“This is the 50th anniversary of the Apollo 11 landing on the Moon, and just as Michoud helped send humans to the Moon then, we are doing the same thing now with the building of the Space Launch System for the Artemis 1 mission,” said Dutreix.

The current administration has tasked NASA with landing the first woman and the next man on the Moon in 2024, and to that end, Michoud will again be instrumental in building the vehicle that will allow NASA to do just that.

The Michoud facility is currently building and assembling some of the largest parts of the SLS, what will be the world’s most powerful rocket that will send the Orion spacecraft, astronauts and supplies on missions of exploration that go to the Moon and beyond. Led by prime contractor The Boeing Company and using the latest in high-tech manufacturing equipment, including a friction-stir-welding tool that is the largest of its kind in the world, Michoud workers are in production of the SLS core stage, a towering, 212-foot tall rocket stage with a diameter of 27.6 feet that will be the largest rocket stage ever flown.

The large structures and components of the Orion spacecraft, NASA’s envisioned exploration craft of the future, are being manufactured at Michoud under a contract with Lockheed Martin. The structures being built at Michoud include the crew module pressure vessel that will house the astronauts in their space flight and its underlying framework that is designed to ensure a safe and sealed life support environment. Lockheed Martin is also developing the launch abort system for the Orion at the Michoud facility that will propel the vehicle and crew to a safe landing in the event of an emergency.

The core stage’s major structures, manufactured by technicians at Michoud, are being outfitted with electrical avionics, thermal protection systems and additional internal hardware. The avionics will then be tested to ensure they’ll perform in space, then the structures will be joined together, and the rocket engines will be attached to complete the core stage for Artemis 1.

“I started my career right out of college in 1987, and I heard the stories from the old timers about the excitement around the beginning of the Apollo Program and the Space Shuttle program,” Dutreix said. “Fast forward to 2019, I see that same excitement in the young workforce at Michoud today. They are at the beginning of a new era in space exploration, and someday, they will be telling those stories to the next generation.”

To the East, and Beyond!

The Michoud Assembly Facility has consistently provided major economic benefits nationwide. Currently, Michoud supports more than 6,000 jobs nationally, yielding a total economic output of over $830 million. NASA also contracts a wide variety of services at the Michoud facility that are valued at over $89 million, with other government agencies combining for an additional $69 million. The facility generates more than $107 million in Federal, State and local tax revenues.

But Michoud’s importance to Louisiana and the nation goes far beyond NASA.

“Michoud has a regional impact of more than 5,000 jobs, $630 million in economic output, and sources $116 million in government contracts,” said Dutreix.

Always looking to improve, Michoud has added numerous on-site amenities and large-scale manufacturing tools available to the tenants of the facility. They’ve also increased commercial revenue by nearly 35% since 2010.

In addition to the economic benefits and employment opportunities the Michoud facility has provided to the surrounding region, through their National Center for Advanced Manufacturing (NCAM), they’ve also provided educational outreach programs and classes formulated to develop a uniquely skilled and specialized workforce. NCAM is a partnership between NASA, the State of Louisiana, Louisiana State University and the University of New Orleans, providing research, advanced manufacturing technology and material evaluation techniques for use in aerospace and commercial markets.

As we look to the future of New Orleans East, we need only look to the stars to find the limits. The Michoud Assembly Facility, NASA’s rocket factory, has been the key to their space exploration missions for the past 50 years. And there doesn’t seem to be any slowing down. The huge monetary, technological, and educational investments that are being made at Michoud as we enter into the new age of the SLS can only benefit the surrounding region and the New Orleanians who live there.

Who would have thought that a swath of swampland could propel humanity to the furthest reaches of space? Indeed, in the new era of space travel, the road to the galaxy runs through New Orleans East.