From On Field to On Air 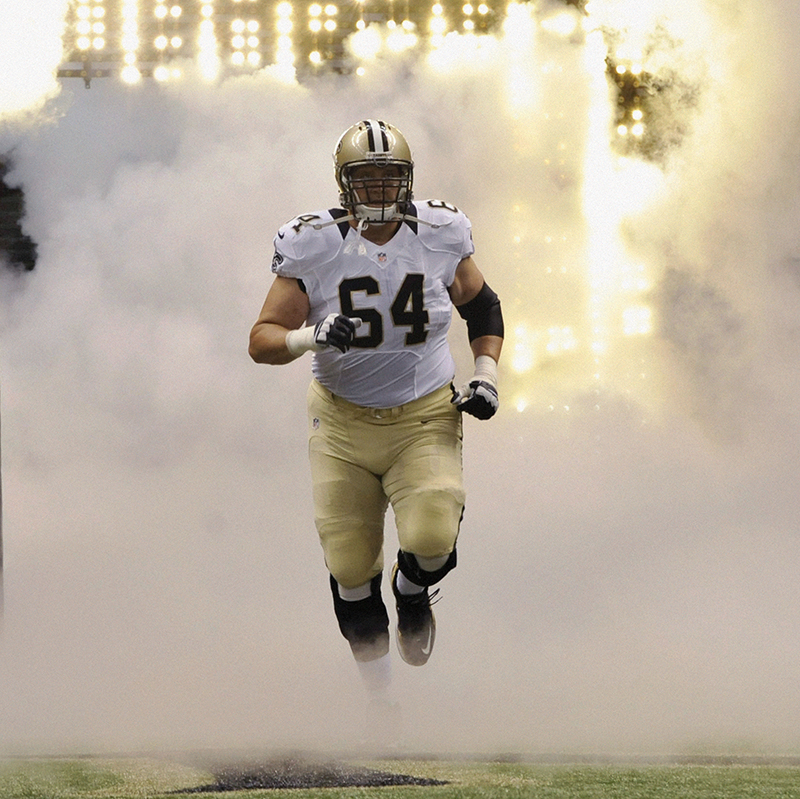 As New Orleans Saints captain Zach Strief completed his 12-year NFL career in January, he met with several media outlets to discuss the possibility of becoming a color analyst or recurring contributor for a football-related talk show or news segment. Following a meeting with WWL Radio, the flagship station for Saints game broadcasts, operations and program director Diane Newman told Strief they would try to fit him into some of their established shows as a commenter, but the only position they had open was for the play-by-play announcer, which became available when legendary sportscaster Jim Henderson announced his retirement after nearly 30 years behind the mic. Strief, who didn’t have broadcast experience, left hoping something would happen, but then turned right around and went back to the station’s office.

“By the time I got to my car, my realization was that job had a lot more attractiveness and a lot more longevity than anything else that I talked to anybody about,” Strief said. “I walked back upstairs, and said ‘That’s the job that I want.’ And they kind of laughed at me.”

While several retired players have gone into broadcasting, the former Saints captain realized the station’s reaction was due to the reality that no one had ever really gone directly from playing to announcing play-by-play action.

“When I told them that’s what I wanted to do, I didn’t think there was any realistic chance of it happening,” he said. “But I thought it was a really cool opportunity, and I wouldn’t have respected myself in a year if I didn’t try.”

Strief asked station management for the opportunity to practice and audition and convinced them his unconventional path to the booth could give the station a unique angle; by pairing him with color analyst and former running back Deuce McAllister, the station would have two Saints insiders on their team who could give listeners a different perspective than a traditional announcer.

His plan worked. In July, the station named Strief the new voice of the Saints.

“There was a period of about a week where I was like, ‘What did I do?’ he said. “I think that the gravity of that job and what it is and who I was replacing became a little intimidating. At the same time, I was ecstatic. There’s only 32 of these jobs in the world, and I got pretty lucky to have one.”

The transition, he said, has been demanding, but fascinating.

“Doing play-by-play for football games on the radio is absolutely a challenge, but, at the same time, I feel like there’s been growth every week, and that’s really exciting for me. It’s something that I have quickly grown a passion for and something I know I’m going to be working hard for a long time to be good at.”

The Saints’ success this season — highlighted by a 10-game win streak, the second-longest in franchise history — has made Strief’s first season on the air more than memorable.

“It’s been the greatest transition imaginable,” he said. “I can’t imagine a better opportunity and a better gig than getting to essentially still be a part of the organization in my first year out.”

In such a historic season, Strief says there are two play calls that have stood out.

“For Drew to accomplish that and for me to get to narrate it was special,” he said. “It was something I was really excited I could be a part of.”

The second was Mike Thomas’ 72-yard touchdown against the Rams.

“I was excited and fired up for them,” he said. “I think that was the most genuinely excited call that I’ve gotten to do, and I didn’t step on any words. I didn’t screw anything up. Those are the things that I worry about now.”

Strief said the most daunting part of the job has been replacing the iconic Henderson. He admits he worried about fans accepting him for not only being new, but inexperienced.

“There’s people that have been listening to Jim for over 30 years, and he’s an absolute professional,” he said. “I knew that going in, certainly in the first year, that I was never going to make everybody happy. I totally respect that, and it’s okay. It’s part of what drives me to improve and to get better. My play call is not anywhere near where it could be and should be. That being said, 99 percent of people have been extremely positive, and I think they’re enjoying it. We’ve had a lot of really fun games. We’ve scored a lot of points. There’s been a lot of opportunity to be excited.”