The story behind Dong Phuong Bakery – home of one of New Orleans’ most popular Vietnamese Poor Boys.

When De and Huong Tran came to New Orleans from Vietnam in the early 1980s, they were chasing the proverbial American dream.

Like many that emigrated from Vietnam to the United States after the war, they brought their family to a new and strange land in the hopes of giving them better opportunities, and perhaps a more peaceful existence.

The Trans and their three young children settled in the New Orleans East neighborhood of Versailles Village, a fast-growing Vietnamese community, in 1980.

While working as a stocker at a local grocery store, De began studying engineering at the University of New Orleans. Huong took care of the young family.

While growing up, Huong had worked in her father’s Vietnamese bakery, so, in an effort to supplement De’s income and make New Orleans feel a bit more like home, she began baking traditional French-Vietnamese pastries in her spare time and selling them to local stores. Her sweets soon became a favorite in the community.

It wasn’t long before the Tran family saw the potential in Huong’s baking endeavors, and when a local restaurant that employed some of their family members went up for sale, Huong and De took a chance and  purchased the restaurant on Chef Menteur Highway in 1981.

The name they chose, Dong Phuong, translates to “east” in Vietnamese – perfectly apropos for a family from East Asia settling in New Orleans East. As with any new business venture, the family worked countless hours to make their restaurant successful.
“It was a lot of hard work,” says daughter Linh Tran Garza. “A lot of long hours.”

By the late 1980s the hard work had paid off, and the family purchased an additional 4,000 square-foot storefront attached to the restaurant and opened Dong Phuong Bakery in 1989.

The bakery has since become a favorite in the community, serving up Asian sweet treats, as well as traditional Vietnamese Bánh Mì  sandwiches – or The Vietnamese Poor Boy – as they are now lovingly referred to in New Orleans.

The term Bánh Mì translates roughly to French Bread, an influence in Vietnamese culinary culture that dates back to the French colonization of Indochina in the mid-to-late 1800s.

While most Asian cultures rely on rice or noodles as their main source of grain, bread is a staple in Vietnamese food culture, and the Bánh Mì sandwich is essentially the perfect marriage of both Asian and French influence. The Bánh Mì is typically a delicious combination of cold cuts (often sliced pork sausage and ham) commonly paired with pâté, and pickled vegetables on a French bread loaf.

While the pork/ham, pâté, mayonnaise and bread are obvious examples of the French influence, the cilantro, pickled daikon, carrots, cucumber, and peppers represent the Vietnamese side.

Dong Phuong Bakery offers 17 variations on the Bánh Mì , its most famous being the homemade pork sausage. The bread has a sweetness to it that is different from traditional New Orleans poor boy loafs, while the cucumber, pickled carrots and daikon add a freshness and a crunch that pairs well with the smooth salty meats. A little jalapeño pepper adds heat, while the cilantro brings a peculiarly inviting herbaceousness.

One of the most interesting business practices that Dong Phuong has employed is their pricing structure. All of its 17 variations on the Bánh Mì are priced under five dollars. The Vietnamese ham, cold cuts and Vietnamese sausage variations cost just $3.25, while the vegetarian option is just $2.25.

The bakery’s most expensive sandwiches, the toasted shrimp patty and Chinese roast beef, ring in at just $4.25 each. 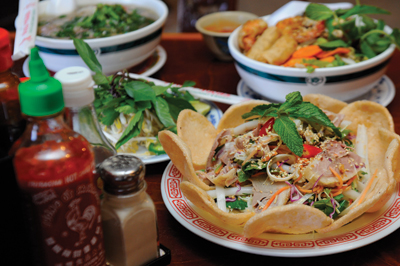 Both Vietnamese and Louisiana culinary traditions have been heavily influenced by the French. Bottom, left: Dong Phuong Bakery’s 4,000 square-foot retail space offers up 17 variations of the Bánh Mì, along with various other Vietnamese pastries. Bottom, right: The bakery sells over 40,000 rolls a week to local restaurants, including McClure’s Barbecue Uptown, Cochon Butcher, Walker’s BBQ and Killer Po’boy.

Bouncing Back After Hurricane Katrina

While Dong Phuong had early success amongst the Vietnamese community in New Orleans, their journey to becoming a renowned bakery was not without its setbacks.

The entire community was hit hard in Hurricane Katrina’s wake, and the restaurant and bakery did not escape unscathed. In the low-lying area of New Orleans East there was massive flooding and power outages.

“Our whole storage facility was destroyed,” Garza says. “We didn’t have water or electricity until late November.”

Like many other New Orleans businesses, Dong Phuong didn’t let Katrina get them down for too long. The company re-opened with a limited menu, but a strong resolve to succeed again, just in time for the holidays in 2005. 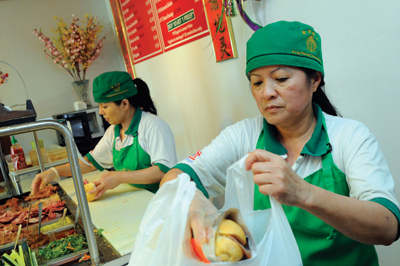 The Bánh Mì  is typically a delicious combination of cold cuts (often sliced pork, sausage and ham) commonly paired with pâté and pickled vegetables on a French bread loaf.

A New Twist on An Old Favorite

In a city that loves its poor boy sandwiches, Dong Phuong’s Bánh Mì was destined to be adored. And while it took a little bit of time for it to catch on, New Orleans finally welcomed this eastern twist on the Poor Boy with open arms. As for when Dong Phuong became a household name amongst Poor Boy enthusiasts? It’s hard to say.

“I cannot recall a particular tipping point,” says Garza. “I do know that we gained popularity with non-Vietnamese customers when we started selling our French bread. I guess since it is a familiar product.”

Dong Phuong supplies several restaurants around the city with their French bread, (over 40,000 rolls a week!) And while some consider it a bit scandalous to be using Vietnamese French bread for a traditional New Orleans Poor Boy, others welcome the idea with open arms.

Neil McClure of McClure’s Barbecue Uptown uses Dong Phuong Bakery bread for all of its sandwiches and advertises this on their menu.
“It’s simply because they have the best bread in the city,” McClure says. “I love what they’re doing. They are great bakers.”

Popular downtown lunch spot Cochon Butcher also buys bread from Dong Phuong for some of their unique sandwiches, and other hotspots like Walker’s BBQ and Killer Po’boy have followed suit.

Dong Phuong has received several accolades from the city, including a win at the Oak Street Po’ Boy Festival in 2009 for “Best Pork Poor Boy.”

The bakery was also featured on the Food Network show Meat & Potatoes in 2011 in an episode that focused on “cheap eats.”

“It’s a great variation of a poor boy if I’ve ever seen it,” said the show’s host, Rahm Fama. “Dong Phuong, you may be cheap, but you’re rich in flavor all the way.”

But even with their increasing popularity, the Tran family has no huge plans for expansion. No franchises or food trucks are planned in the near future.

Since De’s passing a few years ago, Huong and Linh have taken over running the business without him, and they are happy with how far they’ve come. For now, they are quietly enjoying their successes and their celebrated place in our sandwich-loving community.

“My mom is happy,” says Linh. “We are not looking to change anything right now.” 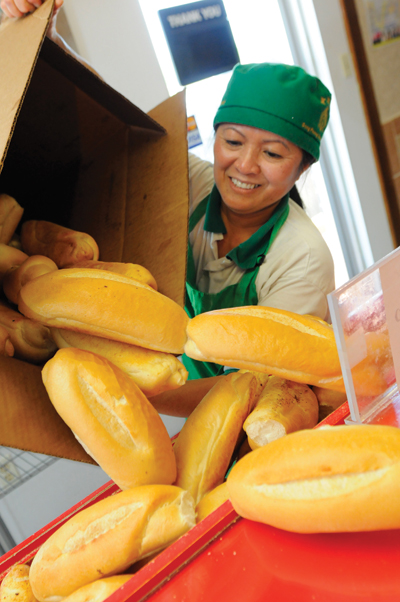 The History of The Poor Boy

As synonymous with New Orleans culture as brass bands, Mardi Gras beads and shotgun houses, the poor boy sandwich dates back to the 1929 transit strike, when the New Orleans streetcar was shut down for nearly two weeks.

In support of the striking workers, bakers Bennie and Clovis Martin of Martin Brothers Coffee Stand and Restaurant in the French Market made it their mission to feed sandwiches to the hungry strikers. They even made a published statement saying, “Our meal is free to any members of Division 194. We are with you ‘till hell freezes, and when it does, we will furnish blankets to keep you warm.”

The name of the sandwich was inspired by the remark they made when they’d see the striking motormen and conductors in the street, “there goes another poor boy,” they’d say.

Dong Phuong Bakery
Business Owners  Huong Tran and Linh Tran Garza
Years in business  25
Location  14207 Chef Menteur Highway
Square footage  4,000-square-foot retail space and additional 3,500-square-foot production space in back.
Known for  Bread loaves and the Bánh Mì
Number of employees  15
What sets the company apart  17 varieties of the Bánh Mì, all priced under $5.
Plans for the future  No expansion plans as of now.

Both Louisiana and Vietnamese culinary culture was heavily influenced by the French, who colonized both regions during the mid-to-late-1800s. While New Orleans proudly serves up French beignets, many traditional Vietnamese pastries also carry a French influence, including: