NEW ORLEANS – The Ocean Conservancy has led the charge for a comprehensive approach to restoration, including funding for projects from Texas to Florida, and from the coast to the deep sea, in response to the explosion of the Deepwater Horizon oil rig. Ocean Conservancy reps said the event tragically took the lives of 11 men and severely injured a dozen more, while also damaging the entire ecosystem of the northern Gulf.

“For restoration to be successful, it must address the needs of both coastal and marine ecosystems, as well as the human communities who call the Gulf home,” said Bethany Carl Kraft, director of the Gulf Restoration Program at Ocean Conservancy. “Although restoration needs in the Gulf far exceed available funding, settlements related to the BP oil disaster could catalyze additional critical investments in restoration if spent wisely. It is important to restore the resources that protect our communities and provide opportunities for subsistence and livelihood so we will be able to continue to live and even thrive along the coast.”

Ocean Conservancy reps said last year the Deepwater Horizon trustees released a report summarizing five years of government research on environmental impacts, with staggering results. Trillions of larval fish and invertebrates, and hundreds of thousands of sea turtles, marine mammals and birds perished. Deep-water corals were killed and may take hundreds of years to recover, while long-lived or slow-growing animals that were impacted will take decades to recover.

“In light of this, it is essential that restoration is paired with continued long-term monitoring and research to understand if these animals and habitats are on the path to recovery, and to reassess our restoration activities if they are not responding to our efforts,” said Kraft. “Recovery of the Gulf region will be the single largest ecosystem restoration effort in the world. Lessons learned about restoration are applicable around the globe for communities grappling with degraded ecosystems and the impacts of climate change.”

Finalized by the court on April 4, 2016, Judge Carl Barbier signed the consent decree detailing how the $20.8 billion settlement agreement will be spent over the next 15 years to address the environmental issues and economic damages resulting from the oil disaster. Ocean Conservancy reps said this global settlement resolves the government’s civil claims under the Clean Water Act and natural resources damage claims under the Oil Pollution Act, as well as remaining economic damage claims of the five Gulf states and local governments. 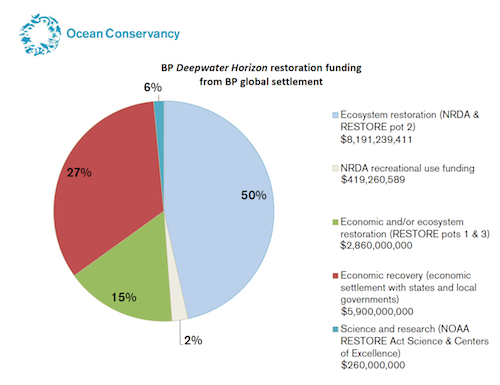 According to Kraft, “With a final consent decree in place, it is now up to the state and federal agencies tasked with restoration to make good on their commitments to restore the Gulf region. The oil disaster wreaked havoc on the economy, communities and environment of the Gulf region; these settlement dollars came at a very dear price. It is our responsibility to invest them wisely on transformative restoration projects that will chart a new future for the Gulf of Mexico.”

Ocean Conservancy reps said they educate and empower citizens to take action on behalf of the ocean. From the Arctic to the Gulf of Mexico to the halls of Congress, Ocean Conservancy brings people together to find solutions for our water planet. Informed by science, they said their work guides policy and engages people in protecting the ocean and its wildlife for future generations.