From Cranes to Carnival

Daryl Fletchinger, owner of Plush Appeal, is a manufacturer and importer of a wide variety of throws. Interestingly enough, the company’s origins can be traced to video games.

During work as a business consultant, Fletchinger worked for the company that distributed Pac Man, an immensely popular arcade game first released in Japan in 1980, which became a recreational phenomenon.

“They wanted me to predict what would be the next big thing,” Fletchinger says. “My research showed that the electronic skill crane would be it.”

This is the game found at arcades, bars and restaurants in which a players maneuvers a mechanical claw around a glass box in hopes of snagging a prize.

“My research showed that if these boxes were stocked with the right product and regularly refreshed with a variety of prizes it would always attract play,” Fletchinger says.

And he was right, but there was a challenge in stocking the crane boxes. At the time, companies manufacturing plush toys only sold cartons packed with single items.

“For example, it might be a box full of brown teddy bears,” he says, “The companies that I was dealing with said, ‘We will never mix product.’”

This problem led him to create his own solution — Plush Appeal in 1989. He began to create pre-packs, cartons that had a wide variety of high quality toys to fill the crane boxes. Plush Appeal still sells crane pre-packs. A 72-piece bag that has no more than three identical pieces costs around $70. 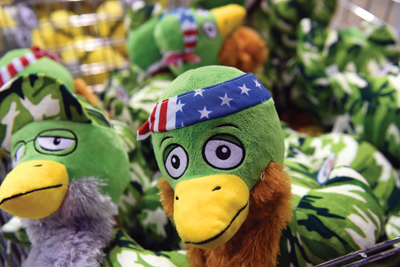 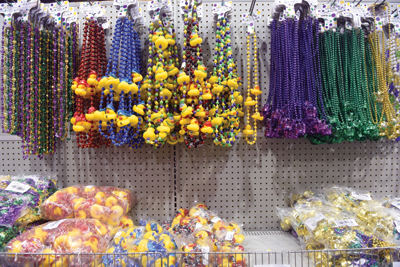 LEFT: Working with production in China, Plush Appeal offers more than 10,000 products and supplies more than 70 parade groups from Tallahassee to Seattle and all around the world. RIGHT: The Fletchingers spend close to two months of every year traveling through China managing logistics for their products.

Plush Appeal employs 30 to 35 full-time employees. During Carnival, their payroll swells with an additional 250 seasonal employees who range from forklift drivers to retail store personnel. Daryl’s daughter, Alyssa Fletchinger, 34, is the company’s vice president and his son, Clark Fletchinger, 29, is in charge of custom project management.

The company occupies 3.5 acres in Mid-City that includes several warehouses, an office space and a 15,000-square-foot retail space.

Fletchinger and his family love Carnival and for years had been involved with the Krewe of Elks, the oldest and largest of all the truck float krewes.

“In ’93 we began throwing our product from our floats,” Fletchinger says. “It started slowly – my sisters, my family, a few close friends – but we quickly started supplying to more and more people.”

As a result, the company began producing more kinds of throws. It now offers more than 10,000 products and supplies more than 70 parade groups from Tallahassee to Seattle and all around the world.

Starting in January, Plush Appeal will begin to work crews for 24 hours a day: packaging, shipping and even delivering pre-packs to the floats the day of the parades.

“I love what I do,” Fletchinger says. “The business has grown through our network of friends and satisfied clients.”

Alyssa Fletchinger started with the company at an early age.  Her father would bring home a product and she would play with it. She soon became his most successful predictor of what would sell.

“She could choose winning products at the age of 8,” he says. “Then she began coming to the warehouse and working after school and weekends to help pack a pre-pack. She was one of the most accurate and fastest on the crew.”

From 2004 until 2011, Alyssa worked as the company’s assistant general manager. For the past four years, she’s taken on more responsibility as vice president.

“It’s been challenging for her because she is a woman working with Chinese businessmen, some of whom are not used to working with women, but she’s been doing such a great job,” Fletchinger says.

Planning for throws begins almost minutes after the last season’s beads have been tossed. The Fletchingers almost immediately begin to meet with clients to plan and create next year’s trinkets and toys.

“Many times we start with a luncheon meeting, and I may come back with a design written on a napkin,” Alyssa Fletchinger says. 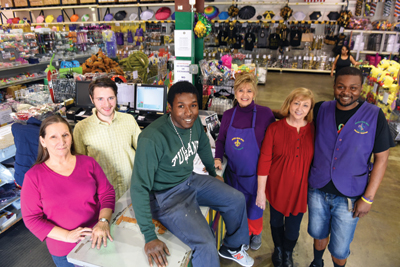 Plush Appeal designs in-house, but some clients request their own fully realized designs; more often they collaborate with one another to create the finish product.

“The main thing we want is to make sure the product they have in mind can actually be made,” Alyssa Fletchinger says. “We want to make sure it won’t break and that it is affordable. There’s a lot of back and forth; sometimes we may have as many as 100 communications. It could be that the color they chose works with the plush throws but not the medallion. There are just so many details to work out.”

During the manufacturing process there are still often changes to be made, as details can easily get lost in the process.

The Fletchingers spend six to eight weeks traveling throughout China every year. The main thing they do during their trip is manage logistics.

“We have to find a way to move our supplies,” Alyssa Fletchinger says. “We use planes, trains, automobiles and buses to make it all happen.”

“It’s important to get the right price because it can fluctuate, and it’s good to get it locked down so your prices to your client is consistent,” says Daryl Fletchinger.

In China, the company works with a wide variety of suppliers and has worked with some of them for decades. Both Fletchingers say that many of the people they deal with feel just like family.

“We know they treat their employees fairly,” Daryl Fletchinger says. “And we have quality control throughout the process. Because we’ve been in the plush business for so long, we are very conscious about safety. We know our products have to be safe because our products go to children. We were already way ahead of the curve on safety.”

The Growth of Plush Appeal

Though their business is most closely associated with Carnival, the Fletchingers have seen their business grow to include green beads for St. Patrick’s Day, orange beads for Halloween, heart-shaped beads for Valentine’s Day, red-and-green strands for Christmas, purple-and-gold ones for LSU games, rainbow beads for gay pride events and even beads as bar and bat mitzvah favors. They also supply showers, weddings, corporate events and school spirit days.

Alyssa Fletchinger says that for many customers, a trip to their retail store is an event.

“People make it an annual event to come and shop,” she says. “They dress up, sometimes in costume, go out for lunch and then come here to shop. You can just feel the fun in the air.”

She attributes the family’s success to strong leadership.

“But we are also successful because my father is not afraid to jump in and try new things,” she says. “He’s a visionary, who also just happens to really love Mardi Gras.”

Beads and Baubles are Big Business

• According to a report by Toni Weiss, with assistance from The Freeman Consulting Group Project, Carnival riders spend $11.78 million on beads annually.

• Super-krewes such as Orpheus, Endymion and Bacchus and their collective 3,500 members toss more than 2 million cups, 3.5 million doubloons and 350,000 gross of beads.

• Some krewes contract with U.S. or international distributors to order their beads and throws; some, such as Krewe of Freret, make some of their throws; and other krewes purchase their throws from local companies such as Plush Appeal/The Mardi Gras Spot.

Early throws in New Orleans were mostly small foodstuffs or flowers handed out by individual maskers. In 1871, Twelfth Night Revelers had a krewe member pose as Santa Claus anddistribute presents. This may be one of the earliest examples of an organized “throw” by a krewe.

Why Do We Throw Beads?

The prevailing view is that the tradition of throwing beads originated with Rex in 1921, but there are other theories, as well. The following comes from Lissa Capo, author of “Throw Me Something, Mister”: The History of Carnival Throws in New Orleans.

“Lyle Saxon, in his memoir Fabulous New Orleans, mentions catching strings of beads when he was a child, which would have been the early 1900s. It is unclear when it began, but by 1913, throwing beads to the watching public became common practice.”

• Until the 1960s, most beads were made from glass in Czechoslovakia.

• Approximately 25 million pounds of Mardi Gras beads are shipped from China to New Orleans each year.

• The whole process from mold-rendered to finished beads can take up to 90 to 120 days or more.

• Manufacturers can make six or more 33-inch strands a minute. They generally sell for around $3 per gross (144 strands), or less when purchased in bigger bulks from distributors.

• The demand for flashier beads is putting increasing pressure on bead distributors to come up with fresh ideas every year, such as blinking beads that feature a battery-charged light-emitting diode.