For 36 years, artist Oscar C. Donahue III has set up his shop, Oscar of New Orleans, in the bustling French Market. Here he sells whimsical handmade pins of such things as pink flamingos, crawfish and cool saxophone playing dudes. But all that stopped on March 12 when the market closed due to COVID-19.

“April and May are our biggest months, so it was a big hit,” he says. “My heart is heavy for my fellow artists. We certainly didn’t see this coming. And those artists who aren’t selling their art online have gone through hell.”

In addition to being a fixture at the French Market, Oscar has been a regular exhibitor at the New Orleans Jazz and Heritage Festival since 1991 and at the Essence Fest since 1996. He also has a strong and vibrant online marketplace.

Oscar first discovered his artistic aptitude at age five, when his first drawing of a dolphin drew “oohs” and “ahhs” from family and friends.

“Throughout my childhood, I drew sketches and dreamt of sending off pictures to the Art Institute in Chicago that was advertised in the back of comics,” he says on his website.

He says he feels fortunate, however, that he got a business background before putting his efforts into an art career.

As a young man, Oscar began volunteering for the March of Dimes and became the anchorman for a closed-circuit TV student news program. He soon became a national youth spokesman for the organization and traveled throughout the country speaking to various youth groups.

“I was headed toward law school and becoming a corporate lawyer until I spoke with a few corporate lawyers who told me they made lots of money but were unhappy,” he says.

Upon graduation from college, Oscar began working for the March of Dimes and was promoted to the national staff in White Plains, New York. During this time, he learned the ins and outs of successful fundraising and the importance of developing a strong business plan.

In 1984, ready for a change, Oscar moved to New Orleans and worked with the United Negro College Fund. On weekends, his passion for art took him to the French Market where he drew portraits. With a growing family, he began looking for a way to increase his income and decided to make jewelry. Oscar of New Orleans was born.

Throughout his career, Oscar has always stayed current with trends and pop culture as he designed his line of wearable art.

“I stay creative and I’m always trying new things,” he says. “You need to capture the interest of your clients. They have a short attention span, so I just need to keep bringing it.”

The French Market reopened in July with only a dozen or so vendors.

“I can go two hours without speaking to anyone,” he says. “We’re at about 10 percent of what it usually is, but it’s something.”

Oscar has started a new feature on his website — he’s offering an “Oscar of the Month” creation and so far, it’s been a success. Another new creation is a cute limited-edition raccoon pin.

“It’s doing very well,” he says. “I have my hands full filling orders.”

Always staying current, he’s also created a “2020 to the Vote” pin and “Black Lives Matter” pins, not only to raise awareness but to assist Southern Solidarity. And his “Peace and Love” and “We Be Okay” pieces are a big success.

“I created them because I wanted to help spread spiritual healing to everyone amidst all this madness,” he says. 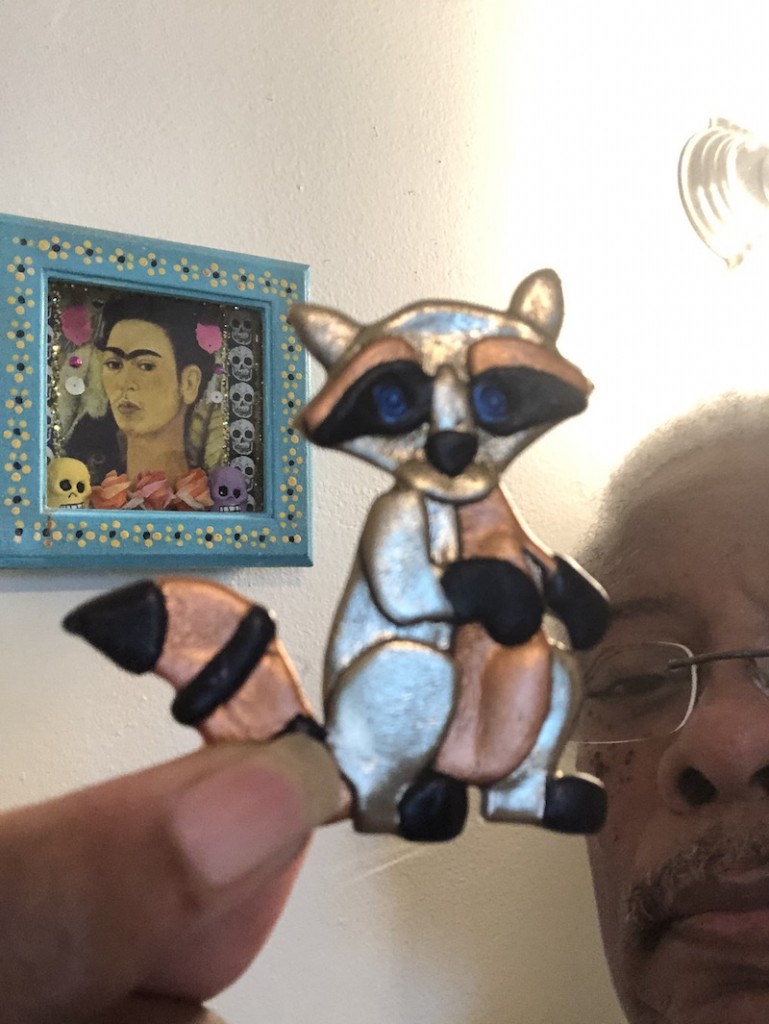 A Taste of Normal