NEW ORLEANS  – Four Seasons Hotel and Private Residences New Orleans is now open in the former headquarters of the World Trade Center building at the foot of Canal Street. In 2018, the hotelier began an approximately $450 million renovation of the circa 1968 structure, designed by architect Edward Durell Stone, in partnership with developers Carpenter & Company Inc. and Woodward Interests.

“New Orleans is a destination that has long been on our wish list,” says Christian Clerc, Four Seasons president of global operations, in a press release. “We could not be more excited to introduce Four Seasons to this incredible community, and to share an authentic and memorable New Orleans experience with guests from near and far. The transformation of this truly iconic building is stunning, and serves as a wonderful addition to Four Seasons portfolio of exceptional properties.” 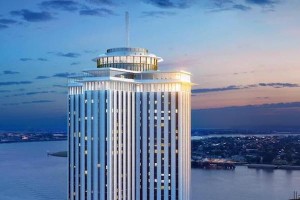 The hotels’s owners boast of its access to the French Quarter, Central Business District, Morial Convention Center, Caesars Superdome and other downtown New Orleans attractions. It is home to Miss River, a new restaurant from acclaimed chef Alon Shaya. Chef Donald Link will open Chemin a la Mer on the premises in the fall. The Chandelier Bar, featuring a 15,000-piece light and glass installation, will offer live music. The hotel’s crescent-shaped rooftop swimming pool will open in the fall.

“We have assembled an unparalleled team of talented New Orleanians and experienced Four Seasons veterans from around the world who exemplify the tradition of warm and welcoming southern hospitality,” said Mali Carow, the hotel’s general manager. “We’ve heard from so many Four Seasons guests, avid world travelers, and locals expressing their excitement for our opening – it’s truly amazing!”