NEW ORLEANS — Pontchartrain Beach Foundation co-founder Guy Williams said there are two things that need to happen to bring an operating beach back to the site of the long-closed amusement park at the lake end of Elysian Fields Avenue.

First, the Lakefront Management Authority, which oversees the property for the Orleans Parish Levee Board, needs to grant a lease to the foundation. And, second, the group has to secure federal infrastructure funds (in the range of $15 to $20 million) to do the work required to convert the site into a safe public recreation area. Williams, who’s the president and CEO of Gulf Coast Bank, said he’s hopeful the authority will grant the lease — and he’s optimistic about the prospect of funding as well. 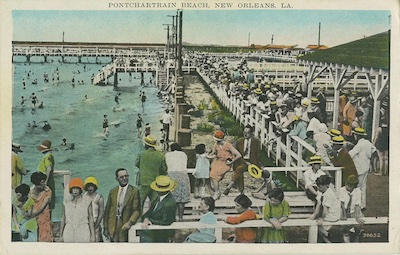 “There’s every reason to expect that we will get the infrastructure money,” he said. “On a federal scale, this is trivial. I mean, this is pennies in the seat cushions. … And Mitch Landrieu, [the former New Orleans mayor and current senior advisor and infrastructure coordinator for President Joe Biden], is in charge of distributing this money, so this has the tremendous advantage of being a project that you don’t have to explain. He won’t be wondering, ‘Where’s the beach? Why does it matter?’ Hopefully, he’ll see this and say, ‘This is an easy one.’”

The foundation, which was co-founded in 2021 by Williams and former fund manager Michael Liebaert to restore the beach, announced this week that it has submitted its lease proposal to the LMA, which conducted a July 19 recreation committee hearing and will consider the idea further at a full board meeting next week.

If awarded the lease, PBF said it will “conduct additional site analysis, establish a public outreach and engagement program, and begin engineering waterside improvements and designing landside improvements, with the beach opening to the public in approximately four years.” It has already hired Dana Brown & Associates to develop a master plan for restoring and enhancing the property.

Williams said a first round of investment would “give you a beach that you can open to the public. We could make it safe, get rid of the sheet piling and the dangerous undercurrent areas. You’ll have a beach, dog park, wetlands and dock.” He said there’s about 20,000 tons of sand — purchased from a failing fracking company — already on the site that can be used to create the recreational beach. Eventually, more money will have to be raised to develop the site further. He hopes temporary bathrooms will give way to a storm resistant permanent structure, and food trucks will pave the way for a restaurant and events facility.

Pontchartrain Beach, owned and operated by several generations of the Batt family, opened as an amusement park at that location in the 1930s. Elvis Presley performed there, as did Fats Domino and Irma Thomas. After decades in business, the park closed for good in 1983 due to declining ticket sales and the lake’s declining water quality as a result of pollution. Thanks to the efforts of the Lake Pontchartrain Basin Foundation and others over the last four decades, the water is safe for swimming again.

Other members of the Pontchartrain Basin Foundation board include real estate developer Zach Kupperman; Linda Delaney, formerly of WYES-TV; and Eugene Joanen, CEO of Balance Consulting. The University of New Orleans and the Lincoln Beach Foundation are partners with the foundation as well. Additional project supporters include the UNO Research & Technology Foundation, New Orleans & Company, the Greater New Orleans Expressway Commission and the New Orleans Botanical Garden.

Williams said all of these stakeholders understand a restored and reopened beach will be great for visitors, locals — and potential locals.

“You’ve got UNO research and technology park right next to the site,” he said. “We’re trying to get high-tech people from California and everywhere else to relocate to that park, and we’ve had some pretty good success. But right now, you look out at a beach but you can’t use it. Wouldn’t it be nice to walk out on the beach and put a picnic blanket out? And think back to your days as a college student. How much fun would it be to walk across the lobby and immediately have a beach where you can go swimming, pretend to study and play beach volleyball?”