NEW ORLEANS – During his ten-year career with the New Orleans Saints, former wide receiver Marques Colston helped his team win Super Bowl XLIV against the Indianapolis Colts, with his seven receptions for 83 yards. He set a record as the teams’ leader in receiving yards, yards from scrimmage, receiving touchdowns, total touchdowns, and total receptions.

But he also dropped a pass in front of 70,000 angry fans – a fact he shared in an auditorium filled wall-to-wall with college students.

Now a successful entrepreneur, Colston recently spoke about the victories he achieved over the years, as both an athlete and a businessman, but also revealed the missteps he made along the way.

Colston served as the keynote speaker for The University of New Orleans’ annual Management Week. The event, hosted by the school’s Department of Management and Marketing, took place from March 11 through March 15 and featured visits from regional business leaders. Colston’s presentation on Thursday, March 14, attracted nearly 225 guests.

Colston is the founder and managing partner of Dynasty Innovation, a strategy and execution firm focused on marketing, branding, sports and education; a partner and director of business development at Main Squeeze Juice Co., a New Orleans-based fast casual juice and smoothie bar with franchise locations between New Orleans and Houston, and more than 40 locations in development throughout the country; and a partner at Timeless Herbal Care, a Jamaica-based cannabis company focused on all aspects of the international medical cannabis industry.

He is also the managing director for the Center for Innovation at Virtua Health systems, and he serves on the advisory board for the One Team Collective, a sports technology accelerator run by the National Football League Players Association.

During his keynote presentation, “Striking a Balance: Life as a Serial Operator,” he spoke about coordinating the various roles he plays as a businessman – and as a husband and father of two young children – and discussed his thoughts on prospering in those roles. 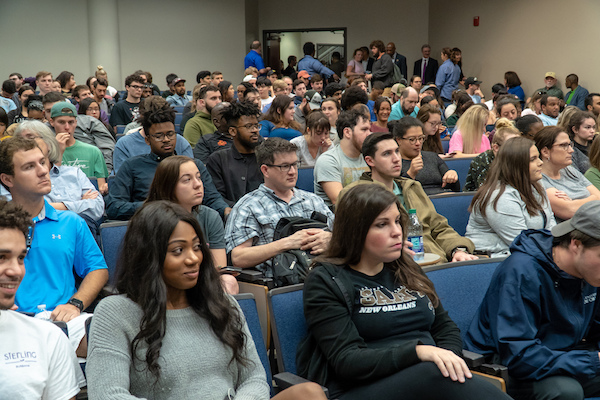 “Lectures in the classroom setting are really valuable, and the ability to layer in some real-world insights – talking about the success and the failures in kind of a more, full-spectrum way – is valuable,” Colston told Biz New Orleans, explaining why he chose to participate in the Management Week. “It was an experience that I wish I had more of as a college student.”

Here are a few highlights, divided into different topics, from his presentation.

The Benefit of Failure

Colston believes, “Failures are only failures if you allow them to be.”

The “opportunity to fail” has given him learning experiences that have led to successes in both the business arena and the world of sports.

The ability to process those failures, deal with them, and move forward, is the key component to entrepreneurship and management as whole, he said.

“As entrepreneurs and as managers, you're not going to win them all, but you have to position yourself to be able to take learnings from the losses, and restart,” said Colston. 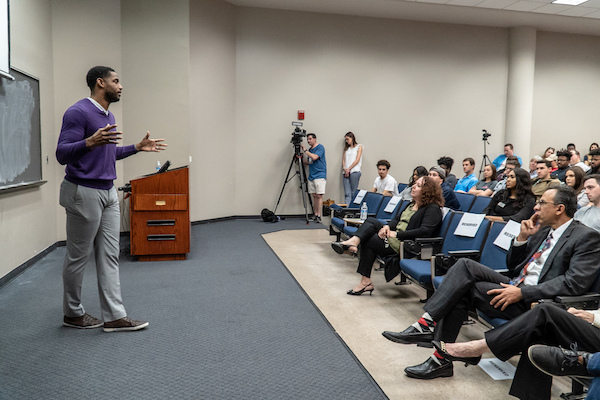 While juggling the many roles he plays as a businessman, Colston makes his family and health a priority.

“As I'm learning these new ventures, I still have to be present. I still have to figure out ways to take care of myself – whether it be working out, making time to eat right, or making time to unplug and take care of myself, mentally and emotionally,” he said. “I’m lucky and blessed to have a support system that understands my grind and my hustle, and that gives me a little more leeway, but it's not easy.”

When it comes to managing a business or staff, he aims to find a balance between mastering one role and becoming familiar with his employees’ roles.

“If you don't understand the different perspectives and the different dynamics that other people are dealing with as you're managing them, it makes it challenging to communicate with them and hold each other accountable,” he said, noting that managers have to determine the importance they place on personal glory, versus the ability to sacrifice and build a team. “We're all fighting to move up the food chain.”

He cited the CEO of Main Squeeze Juice Co. as an example.

“He wants to be the unquestioned leader of the cold-pressed juice and smoothie industry, so he has to balance, and learn how to stay on his rising trajectory, but also empower the people he’s managing to grow in their journey,” he said.

The Importance of an Outside Perspective

Even workaholics should find time to “unplug,” so that they can examine their progress, said Colston.

“A real-life example of what that means for me is when I spent my first three or four years (with the New Orleans Saints) just grinding it out,” he said. “I was getting an off-season surgery, every single season, for my first four seasons. I would go from playing most of the season banged up, have surgery, rehab, and get right into training camp.”

One of those off-season surgeries “completely changed the trajectory” of his football career. The surgery required an extended rehab session that served as a blessing in disguise.

“I ended up coming back and having the best season of my career because I was able to stumble on that outside perspective, and that ability to unplug,” said Colston. “It allowed me to do what I was trying to get done.”

After answering questions from students, Colston wrapped up his hour-long presentation.

"Being able to keep everything in perspective, and know that every opportunity looks different for everyone, is always valuable information," he told Biz. "I think if this gives the students a little more insight into what entrepreneurship and what management entails, and some of the flaws and the hiccups that go along with that, it was worth it."