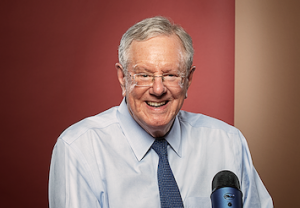 NEW ORLEANS – On the inaugural virtual Business Forum co-presented by Biz New Orleans (click here to watch), iconic publishing executive Steve Forbes said the beginning of a pandemic recovery in 2021 will provide plenty of opportunities for businesses and investors – as long as taxes and regulations don’t get in the way.

“The new year is really going to be a challenge in terms of getting these vaccines out,” said Forbes. “But as people get confidence … we can get back to full-throated commerce. It will take a while to get over the adverse impacts of COVID-19 but at least we can see that coming to an end instead of these fears of lockdowns and states doing things that hurt commerce. I think the key thing is we are going to avoid big tax increases and the like and to make sure, both on the national level and state level, that we don’t suffocate this nascent economy with massive new regulations.”

Forbes said one of the exciting trends before COVID was the rise in the number of new business startups after a period of decline. Though the number dropped in 2020, he hopes to see it bounce back in the right environment.

“[New business startups] were once a great strength of the American economy,” he said. “It’s how we created the great companies of the future. Look at Google. Look at Facebook. 25 years ago they were nothing. They were babies and then they became giants. If we want new, dynamic giants of the future, we have to keep that competitive atmosphere.

“We have to make sure we remove the obstacles – tax and regulatory – so we once again play to our great strength of creating prosperity here at home and competing with other companies and countries around the world. Let’s play to our strength – and small business is a key part of it. This is what we should be focusing on both a local and federal level.”

Forbes believes there should be and will be more federal help for businesses in 2021 – but he doesn’t think it should be called “stimulus.”

“They should be called relief packages,” he said. “They are not really stimulus in the way a big tax cut would be or removing barriers to the way people do business with each other would be. This is really dealing with a disaster. We all know that after a natural disaster, like a hurricane, you pour in resources to try to rebuild so people can get back on their feet again. That’s what this final package should be, a relief package. When you have a disaster like this that cost literally trillions of dollars in economic activity, a big spending program by the federal government is absolutely in order – as if we were fighting a major war.”

Forbes said he’s in favor of another round of relief payments to individuals. He also thinks lawmakers need to remove “obstacles and barriers” from the Paycheck Protection Program and similar efforts.

“The PPP had an arbitrary number of how much of the money had to go toward payroll,” he said. “A lot of businesses spend more on rent and other costs then payroll – so let’s get these restrictions out of the way.

“There are a lot of casualties [of the pandemic] but many can be overcome if we do a proper relief bill and not use it as a way to bail out states that have mismanaged their finances or for giveaways to things like the Kennedy Center, which is fine but you don’t need to give $25 to $30 million dollars of taxpayer money to it.”

Forbes, famed for his past market predictions, offered some thoughts on what lies ahead for investors.

“I think the markets are going to be choppy short term because of all the uncertainties out there,” he said.” I always advise people to treat their investments in two ways. One is your retirement money, whether it’s a 401k or an IRA. If you don’t have time to really study these things, find a few index funds with low expenses and ignore it. Over time, this country always recovers. Stocks always recover. If there is a severe downturn, that means your money is going to be buying more shares. And over time you will do very well. If you are a young person, just do that and you will do better than most money managers.

“For your own individual portfolios, trying to time the market is treacherous. The only way you should time the market is, if you feel things are really going to go to hell in a handbasket, buy some ‘puts’ [a contract that gives the owner a right, but not the obligation, to sell a stock at a predetermined price]. It’s a form of insurance, but that way you won’t be whipsawed by losses and gains. And the other thing is, if you want to time these things, you have to recognize that when you’re wrong, cut your losses. Research shows that taking a loss is five times more painful than the satisfaction you get out of a gain, which is why no one likes to own up to their losses. That’s why at cocktail parties everyone is an investment genius.”

Forbes also said that you take a profit and then stock continues to rise in value, “don’t beat yourself up about it.”

“As the old saying goes, you never go broke taking a profit,” he said. “So try to keep your emotions in check and in the next year expect a lot of turbulence but, ultimately, I see signs that we’re starting to get things right.”

The business forum is sponsored by Engel & Volkers and the New Orleans Chamber.