NEW ORLEANS — The current home of Peter Mayer Advertising is for sale.

Earlier this week, Corporate Realty announced it is representing brothers Mark, Eric and Josh Mayer in the sale of 318-320-324 Camp Street, a 38,729-square-foot property that consists of three buildings located a block and a half from Poydras Street and two blocks from Canal Street and the French Quarter.

The move follows two years of big changes at Peter Mayer, the state’s largest ad agency which claimed $82 million in billings in 2021.

In 2020, then co-owners Mark and Josh Mayer named EVP and Chief Strategy Officer Michelle Edelman the new agency president. Then, in early 2022, the Mayers sold the business to Edelman outright. This week, the brothers announced that they plan to sell the three historic buildings on Camp Street that have been home to the Peter Mayer Advertising offices since 1979. 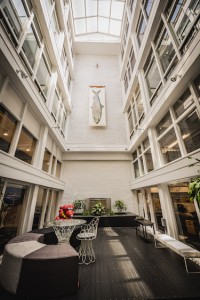 “We planned to move at the change of ownership [earlier this year] and put in an 18-month lease to get our strategy and the move together,” said Edelman. “We are exploring options for our next location, and our plan is to downsize square footage reflective of our hybrid work culture while still maintaining our vibrancy as an agency. We are committed to keeping our headquarters in New Orleans and building this area as a hotbed of creativity.”

Each of the four-story buildings on Camp has been renovated to combine contemporary interiors with historic character. Features include state-of-the-art conference rooms, curved walls, a soaring glass atrium in one building, original pressed tin ceilings in another, and connections between buildings on each floor.

“It all didn’t happen at once,” said Josh Mayer. “We moved to Camp Street in 1979. We renovated 324 Camp, and we didn’t even occupy all four floors, but as we grew as a company, we [expanded into the adjacent buildings] and eventually we knocked through on each floor.”

Originally built in the 1850s, the buildings qualify for both state and federal historic tax credits that will allow a developer considering future use to recoup more than 30% of its renovation costs. Mike Siegel at Corporate Realty said feasibility studies have been done for both a hotel conversion, which could result in a boutique hotel consisting of approximately 51 rooms and suites with restaurant and bar, as well as for a multi-family residential property featuring approximately 48 units. Zoning permits both opportunities.

For the Mayer brothers, meanwhile, listing the property is the exclamation point on two years of change after three-plus decades of running the business founded by their father Peter in 1967.

“Advertising is a young person’s business,” said Josh Mayer. “We brought Michelle on and she assumed the role of president and is very capable, and she was interested in owning the business. So it was perfect for us. We grew the business enormously and had many years of success and worked with literally thousands of great people in New Orleans, but advertising goes through evolutions all the time.”

With their preferred tenant out the door by the end of June 2023, Mayer said it makes sense to find a buyer for the buildings that he and his family have meticulously renovated over the last four decades.

“These are exceptional buildings in an exceptional location,” said Siegel. “We are honored to be working the Mayer brothers to bring these properties to market.”

This story was updated on 9/23 to include quotes from Josh Mayer.