» Folgers Coffee Sourcing Manager, Jerry Cook, shares the recent history and future plans of how Folgers is consolidating in New Orleans and what that means for us. From the recent addition of over 200 jobs, to a workforce fleet volunteering in rebuilding efforts, Folgers continues to make an impact.

We all know the ubiquitous smell that seeps into our cars as we’re driving over the high-rise bridge; that aromatic morning gift from the Folgers coffee plant in New Orleans East. It is one of those New Orleans staples that we take for granted, but that, when mentioned to a neighbor, invites a smile and pleasant conversation.

The Folgers coffee roasting plant has been a part of New Orleans East since 1960 when new shipping routes from Central America to New Orleans caused our city to become one of the largest green-coffee markets in the United States. Since then, New Orleans has adopted Folgers as one of its very own, employing thousands of New Orleanians and expanding operations at two facilities in New Orleans East, and adding two warehouses in metropolitan New Orleans, maintaining operations at a Silo Facility on the Mississippi River and an additional warehouse in Lacombe. Just like a morning cup of coffee stimulates our ability to do good work, Folgers has stimulated our economy with good work and a loved product.

“We’ve relocated all of our coffee manufacturing to New Orleans,” says Folgers Coffee Sourcing Manager, Jerry Cook. Cook has been working in the New Orleans East Folgers plant for decades and speaks with an air of passion and excitement when explaining the recent evolution of Folgers coffee in New Orleans. “We consolidated our Texas and Missouri manufacturing facilities  here. That means new packing lines, new processing equipment and a whole lot of labor constructing these facilities.

“We gained at least 200 new jobs directly, and contracted close to 1,000 people for a two-year period,” Cook continues. “That’s a direct local economic impact.” It’s true, Folgers has made an enormous impact on the local economy of New Orleans, and has been for years. In 2005, after Hurricane Katrina, the Folgers plant was one of the first businesses back in operation within a month after the storm with about 90 percent of the workforce returned. They even provided housing for their employees and fed first-responders, police officers and firefighters for as long as seven months. That means a direct impact for all 450 of their employees plus.

“For example, we have a yearly basketball tournament held at   Milne park. This year it was dedicated to Children’s Hospital of New Orleans. Our employees pay entry fees, we charge for tickets and concessions and in the end, after having a really good time at the event, give all the proceeds to that organization.

“In addition, we also do a lot of hands-on work in the community,” adds 29-year Folgers Employee and Associated Human Resources Leader, Helene Jackson. “We’ll shut the plant down for the day and have all of our staff that would otherwise be working, volunteering and participating in local charity events. We do things like Susan G. Komen’s Race for a Cure, Rebuilding Together New Orleans’s October Build, and every December we spend a lot of time volunteering at several residences rebuilding houses that are still in disrepair from the storm. That’s anywhere between 300 to 500 people volunteering to fix flooring, windows, sheetrock and whatever else is needed to get residents back in their homes.”

It’s this community oriented spirit along with the vivacious taste of their home-brew coffee that has made Folgers a household name in New Orleans. Everyone knows their jingle, “The best part of wakin’ up is Folgers in your cup”TM and we revel in it. It’s a part of us. Folgers is New Orleans’ coffee.

The Company’s belief system always circles back to serving families. Mark Moore, Plant Manager of The J. M. Smucker Chef Coffee Facility, says it best: “Our company’s purpose is to help bring families together for memorable meals and moments. We think we do that in New Orleans by producing a high quality coffee.

Folgers provides stability to the families of  employees but more than that, we help to provide stability for our community through our donations, our volunteer service and our support of local vendors and suppliers. In short, our vision for the Folgers Chef plant is to serve the perfect cup of coffee, serve our neighbors and serve each other.”

So, next time you’re driving over the high-rise, remember that’s not just the sweet scent of coffee roasting in New Orleans East, it is the smell of an economic driver creating more jobs and more family memories for the people of New Orleans. 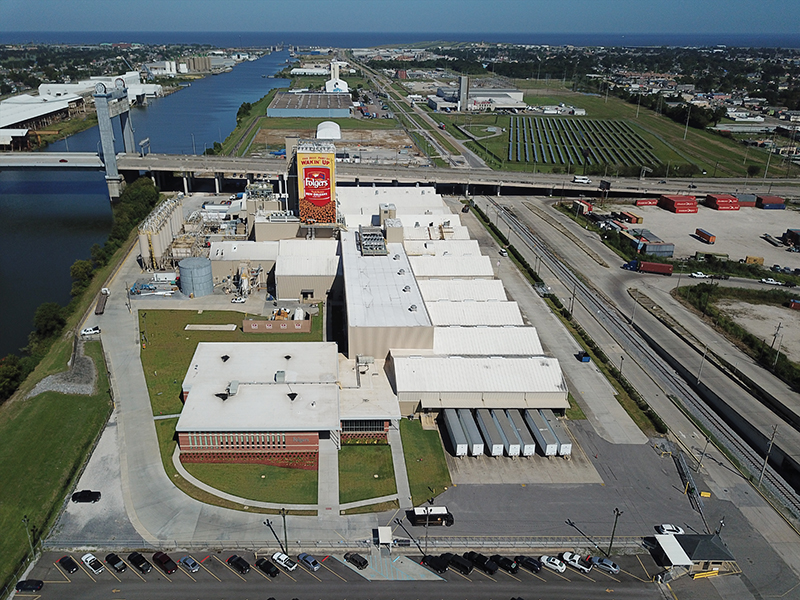 Established in California in 1850, Folgers Coffee has become a staple in every New Orleans home. Here is a bird’s-eye view of the company’s 160,000-square-foot Chef Building located along Chef Menteur Highway. Folgers’ main facility is 405,000-square-feet and located in Gentilly.  Both locations are impressive driving economic forces in the East.