When Erin Romney-Cazes envisioned the look of her third incarnation of Romney Studios, she imagined a retreat with clean lines and lots of light. The approximately 4,000-square-foot, narrow, white, three-story building at 5619 Magazine St. in Uptown was a collaboration between Romney, her husband Hunter Cazes, who is in real estate and investment, and father Brian Romney, an architect for the University of Utah. Offering a variety of workouts, including Pilates, yoga, RIDE, Megaformer, boxing and BARRE, the boutique studio has a simple design that puts the focus on fitness.

“I wanted to create an environment that was not distracting,” says Romney, who designed the interior with the help of Ann Holden, of Ann Holden Design Firm, on color choices and other finishing touches. “Growing up, I was always going with my dad to houses and buildings and have always been interested in interior design. I wanted it to be modern, fresh, bright and clutter free.” 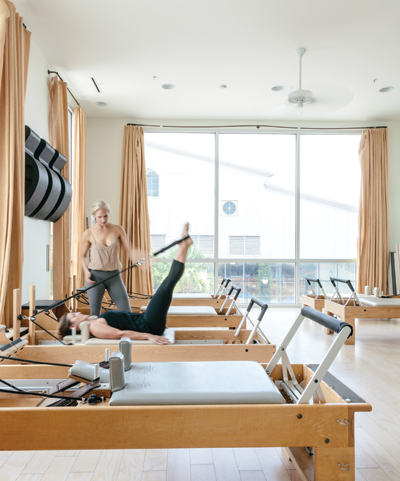 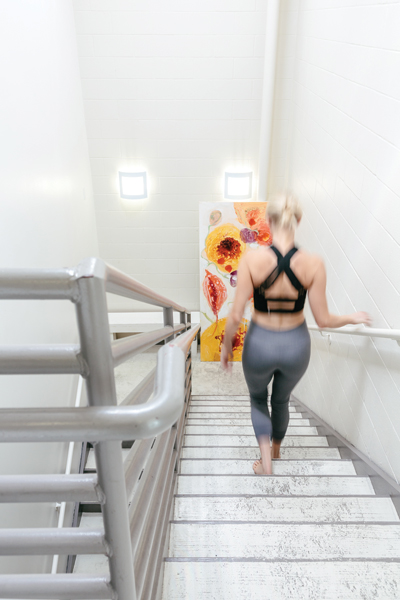 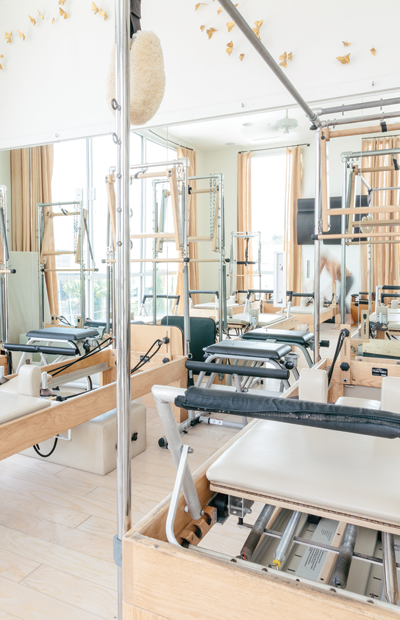 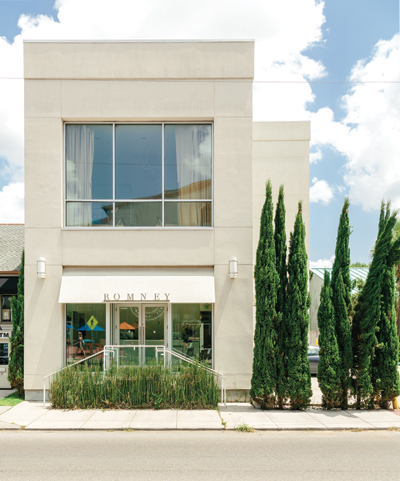 (Top Left) Artwork by friends and clients is employed throughout the space. A piece by Karen Laborde with Soren Christensen Gallery adds a pop of color to the stairwell. (Bottom Right) “We put crystals under the floor to balance out the metal,” says Romney, elaborating on the feeling of Zen she worked to cultivate in every aspect of the space.

It was important to Romney to keep the design and materials eco-friendly and non-toxic, so she says while it’s not certified, the studio is built to LEED standards. She also worked with Rashia Bell of The Cristalline, a New York-based design and crystal healing company.

“We put crystals under the floor to balance out the metal,” says Romney, elaborating on the feeling of Zen she worked to cultivate in every aspect of the space. “We want people to feel comfortable. If they are comfortable, they relax and move with fluidity and ease. Feng shui can really help people get in a good mood if you have the right elements.”

The space on each floor is put to maximum use, which is most evident on the ground level. Upon entering the building, visitors are greeted by a white reception desk, created by GoodWood design and fabrication firm. To the left is a diminutive retail space stocked with workout gear, as well as a refrigerator filled with various juices and other beverages available for purchase. To the right, a hallway with a succulent wall leads to the RIDE cycling room, which features a conceptual street map mural of New Orleans created by a client, as well as a word wall by Dan Akerley, an architectural and digital designer and fabricator.

"We want people to feel comfortable. If they are comfortable, they relax and move with fluidity and ease."

Work by local artists — many of whom are friends and clients — is showcased throughout the space, including pieces by Allison Stewart, Raine Bedsole and Karen Laborde. Romney has also contributed her own artistic flourishes with an installation of gold leaf butterflies in the second floor Pilates room and a wall covered with lights in the shape of tree branches in the nearby Megaformer room.

The Pilates room is open and bright with tall ceilings, expansive plate glass windows and a wall of mirrors. The Pilates machines are all blonde wood, blending in with the light colored flooring. Three ficus trees potted in tall, white pots are perched upon a massive wooden chaise lounge which doubles as a bench at the entrance of the room.

In contrast, the Megaformer room with its massive black machinery has low ceilings, tree branch lights, a ledge filled with candles and twinkle lights. Romney says her aim was to balance out the intimidating machines with softer, lower lighting. 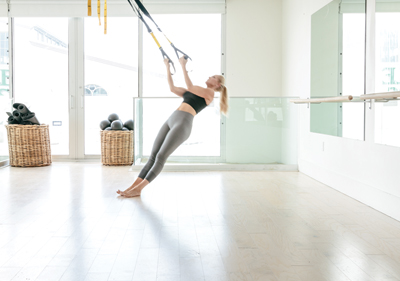 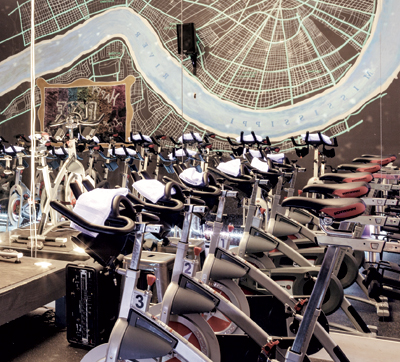 (Left) The third floor is dedicated to boxing, BARRE, yoga, Mat Pilates, BOSU (a balance ball workout) and roll and release. The open room has a bar, mirrors and access to a patio that overlooks Magazine Street. (Right) The RIDE cycling room on the first floor features a conceptual street map mural of New Orleans that was created by a client, as well as a word wall by Dan Akerley, an architectural and digital designer and fabricator. (Bottom) Concrete at the entrance of Romney Studios is embossed with the word “Relax” to invite clients in and set the tone for the space.

The third floor is dedicated to boxing, BARRE, yoga, Mat Pilates, BOSU (a balance ball workout) and roll and release classes. It features one open room with mirrors on one wall and an equipment shelf on the opposite wall and overlooks a patio with views of Magazine Street.

While the current studio opened in 2012, Romney says she modeled much of the atmosphere after her former studio at 3601 Magazine St., which became a refuge of sorts for many clients post-Hurricane Katrina in 2005.

“When we opened [the former location] back up after Katrina, people really didn’t want to go home,” she says. “They needed that social support. I put out tea and candles. I knew I really needed to create a retreat. That has kind of been my mission. I see the effect a nice space can have on someone.”

Biggest challenges: Constructing the building to the specifications of the neighborhood and making the resultant narrow space feel open.

Standout features: The overall minimalist design, as well as the bright, airy feeling of the spaces, especially the Pilates room.