Fighting for the Kids

Businesses can team up with CASA to advocate for children who need it most.

Every two minutes, a child enters the foster care system in this country. In one month, 300 Louisiana children will be removed from their home due to abuse and/or neglect and placed into foster care.

“These children have done nothing wrong,” said Joy Bruce, executive director of CASA New Orleans (Court Appointed Special Advocate for Children). “It’s no fault of their own and their parents do care deeply about their children, but poverty, lack of education and resources and mental health issues can make it hard to be the parents they would want for their children.”

Recently retired, Joe Melcher, a professor of speech pathology at Xavier University, began volunteering with CASA three years ago after deciding he wanted to do something new and rewarding in his life. He said he’d always been curious about how the foster system worked and had heard some horror stories. He decided to try and help.

“I didn’t want to sit on my rear end and do nothing,” he said. “My first child was 17 years old. His home life was not good at all. He was simply not being taken care of. At the first meeting, I got to know him and learned some things about him, like what kind of candy he liked. The next time we met, I had a Mr. Goodbar candy bar for him. His face absolutely lit up. He was impressed and grateful that I’d remembered that one small thing about him.”

CASA aims to ensure a qualified, compassionate adult will fight for and protect a child’s right to be safe and be treated with dignity and respect. Advocates also assume the role of a lay guardian ad litem: adults responsible for protecting the wellbeing and interests of their ward.

CASA advocates remain appointed to the child’s case throughout its duration. So, while a child may have multiple attorneys, social workers and therapists, most of the time they have only one CASA advocate.

“They need that constant person in their lives,” Henry said. “Connection is important to everyone, but it is especially important to these children to have a permanent connection. They are the glue that connects the pieces in this complicated child welfare system.”

The Creation of CASA

The CASA program was created in 1977 by Seattle family court judge David Soukup, who recognized that the system to care for foster kids was underfunded and overworked. He knew that children would have a much better chance if they could rely on a single adult volunteer that was outside of that system and trained in how to advocate for each child’s individual needs.

In 1985, CASA New Orleans was formed under the guidance of Judge Salvadore Mule. It became the first CASA program in the state of Louisiana and has since served thousands of children under the jurisdiction of Orleans Parish Juvenile Court.

Kayana Bradley started working with her CASA advocate, Caitlin Waugh, when she was 13 years old. She’s now 22 and determined to “pay it forward” by working at CASA through AmeriCorps as youth support, where she helps other foster kids as they age out of the system.

“I was fortunate to work with my advocate,” Bradley said. “She’s my best friend and she still gives me guidance and words of wisdom. You want normalcy, just like any other child, and Caitlin provided that for me.”

Advocates come from all walks of life and need no special education. Bruce said the most important things volunteers need are to be caring and competent.

“They do need to be a bit computer literate and willing to make a commitment,” he added.

Advocates do, however, undergo a lot of training. Since 2016, Leslie Adams has been training volunteers to be CASA child advocates. The 36-hour training, which also includes observations and homework, covers topics including childhood development, domestic violence, child abuse and everything advocates need to be successful during court dates. Adams recently completed training seven new CASA advocates.

“They did a great many case studies that put what they’ve learned to practical use,” she said. “And this group was very impressive, they really took to the skill sets. I was impressed.”

Melcher said he continues to be rewarded for his volunteer efforts with CASA. He’s worked with several more children but said his first foster child still holds a special place in his heart. That young man was eventually reunified with his parents.

“Foster care isn’t just about providing a roof over these kids’ heads, Bruce said. “It’s about a team helping them. Society has a fundamental obligation to ensure the basic rights and needs of every child are met, and CASA volunteers are a formidable force that fight for these rights.”

Kayana “Keedy” Bradley came into foster care as a young teenager. As Keedy prepared to age out of the system at 18, she was adamant that she wanted to use her story to help improve outcomes for other foster youth.

The week after she turned 18, Bradley was the centerpiece of a series of National CASA videos highlighting the importance of teamwork in the foster care system. She spent two days bravely telling her story, which has now been shared across the country and on social media.

She also worked with DCFS and the Chaffee Independent Living Skills providers, speaking directly with current foster kids and preparing them to age out.

“We are so happy to see Keedy find her voice and watch her grow,” said Joy Bruce, executive director of CASA New Orleans.

CASA partners with DCFS and the Orleans/St. Bernard court systems. Some of the organization’s biggest supporters are Chalmette Refining, The Advocate, Baptist Community Ministries, the Meraux Foundation and The Domain Companies.

CASA New Orleans is a private, non-profit organization, managed by a board of directors and operated by staff. The organization receives funding from a variety of sources, including the United Way of Southeast Louisiana, Temporary Aid for Needy Families and Victims of Crime Assistance, as well as other private foundations, corporations and generous individuals.

A Good Match
FOR COMPANIES WHO CAN…
Help spread the word about CASA on social media.
Encourage employees to learn more about becoming an advocate.
Donate advertising.
Put together a team for next year’s Superhero Race (held in February)
Choose CASA as your nonprofit to benefit when shopping through Amazon’s Smile program.

By The Numbers
SUCCESS OF SERVICES

CASA New Orleans serves more than 120 kids at a time. Of those, 61 children up to the age of 18 stayed in foster care and were assigned an advocate.
Of the 61 with a volunteer advocate in court custody, 31 cases were closed.
Of the 31 closed cases, 28 found permanency (over 90%)
18 (64%) were able to return to their parents or a relative
10 (36%) found a forever home through adoption
The three kids who did not find permanency aged out of foster care and the organization has followed them.

For youth transitioning into adulthood (18+ years old) in New Orleans:
65% have experienced homelessness after 18 (including 50% of kids who graduated after experiencing homelessness in high school)
94% have been helped by CASA with enrolling in school or a job training program
20% of former foster youth nationally enroll in college (and only 3% finish) but CASA New Orleans has had 53% of its kids accepted to college (82% of those with a high school diploma) and 19% are scheduled to graduate in the next year.

Speak Out
If you suspect child abuse or neglect call toll-free 855-4LA-KIDS 24 hours a day, 365 days a year 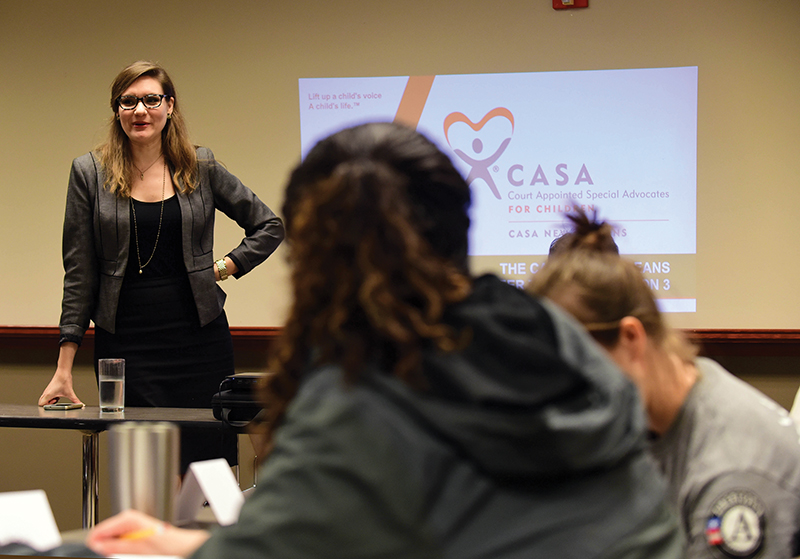 Mission
The mission of CASA is to provide trained community volunteers to advocate for the best interest of abused and neglected children in court. The goal is to ensure that every child has a safe, permanent, nurturing home.