Being a dad in Louisiana is tough.

According to personal-finance website WalletHub, that compared the 50 U.S. states and the District of Columbia across 20 key indicators of friendliness toward working dads, we live in the 46th worst state for fathers. Life expectancy is ranked at 49, the average length of a work day ranks 46 and the percent of physically active men ranks 45.

This Father’s Day, Sunday, June 17, does he really need another necktie or breakfast in bed?

At the Windsor Court Hotel, 300 Gravier St., treat dad to a Father’s Day Suite Summer Staycation where he can indulge in dining, poolside drinks and free bourbon.

Through Tuesday, September 18, the Windsor Court Hotel’s discounted staycation packages include a $50 per night credit for dining (Wagyu filet in The Grill Room), drinks (Mai Tais at the Waterman Poolside Bar) or spa treatments (an indulgent deep tissue massage in The Spa). 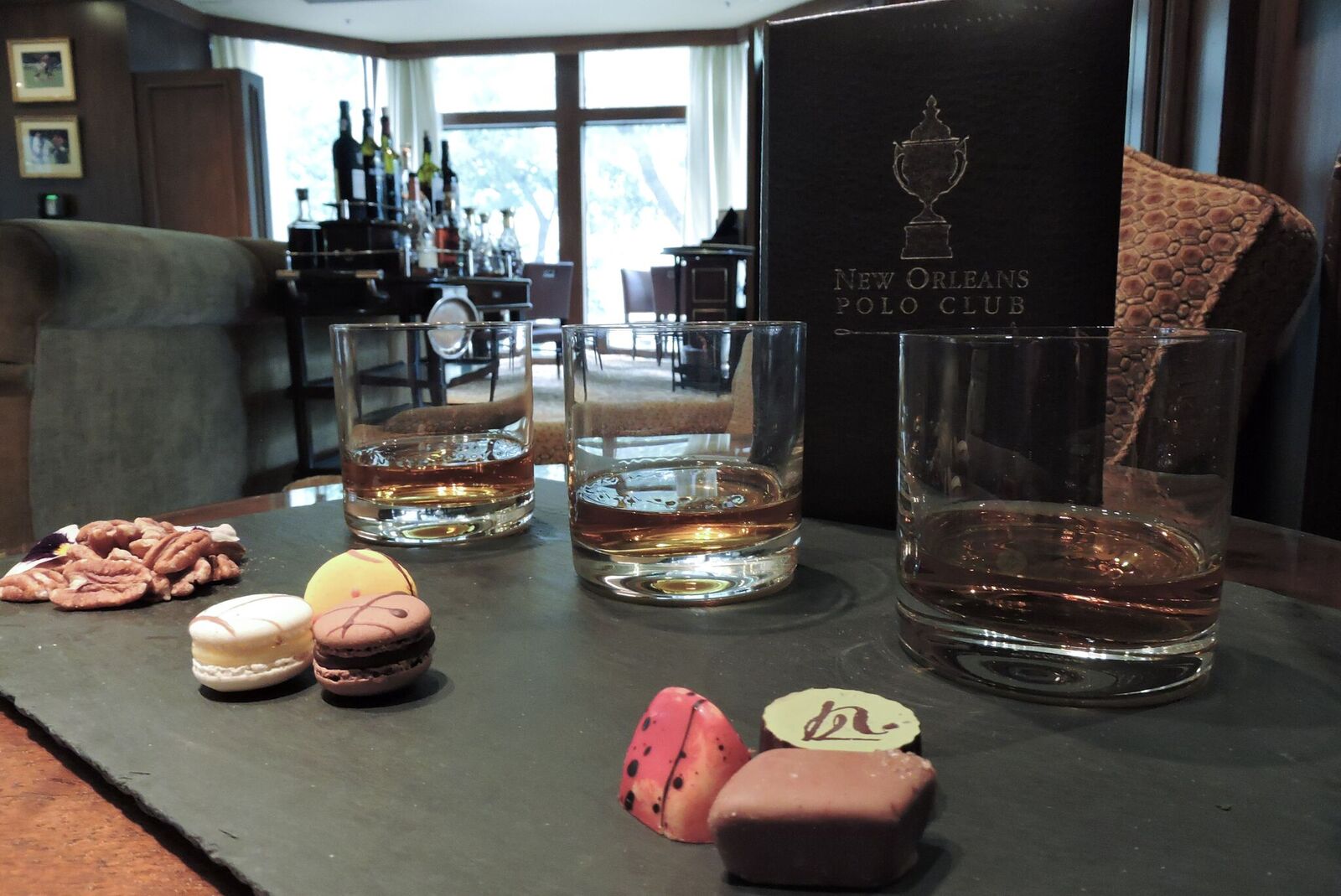 For Father’s Day, enjoy a free flight of Bourbons during a staycation at Windsor Court, an award-winning luxury hotel.  PHOTO CREDIT: Windsor Court 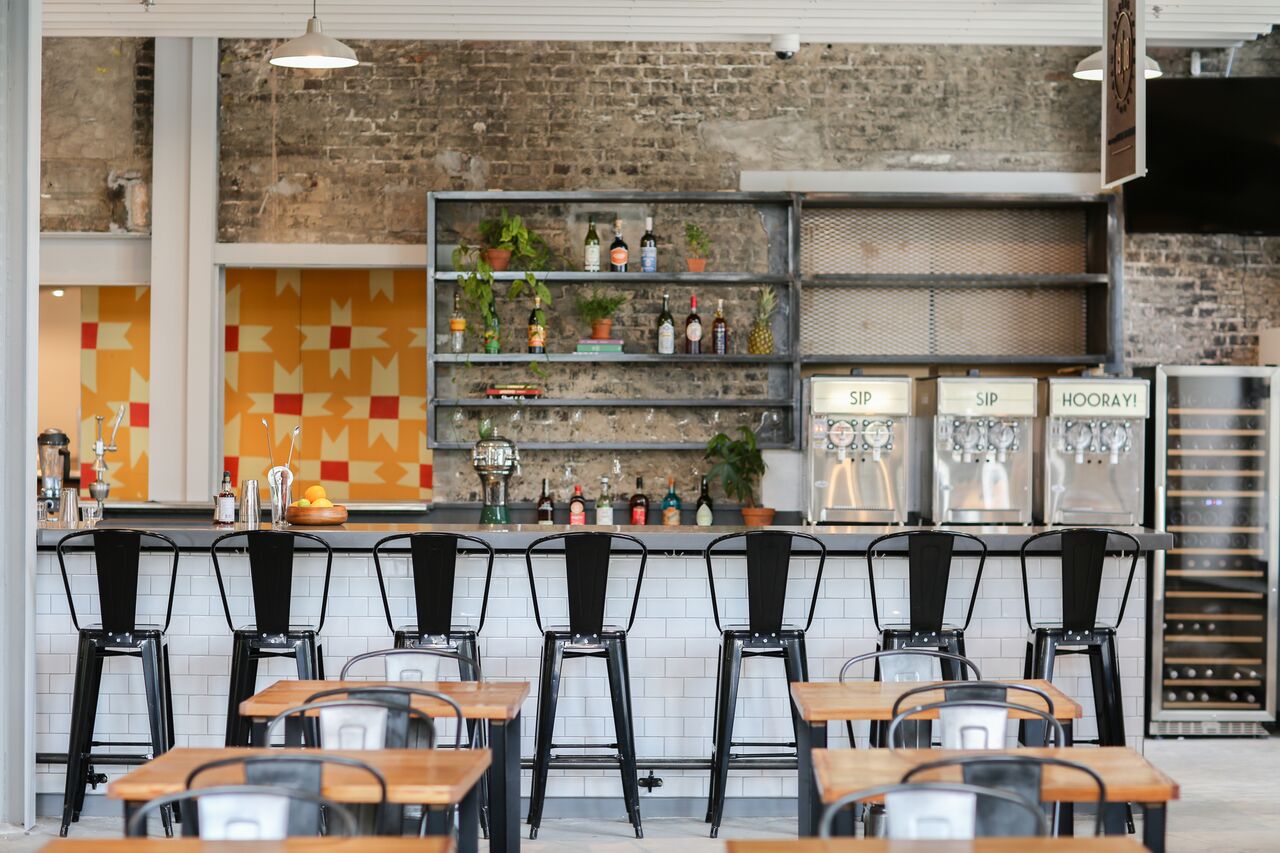 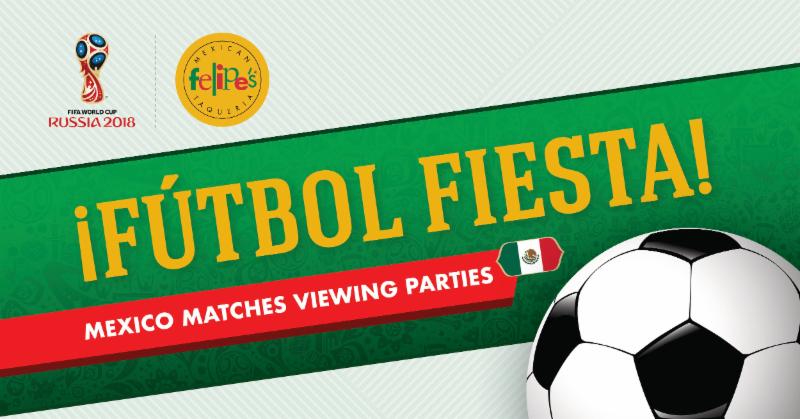 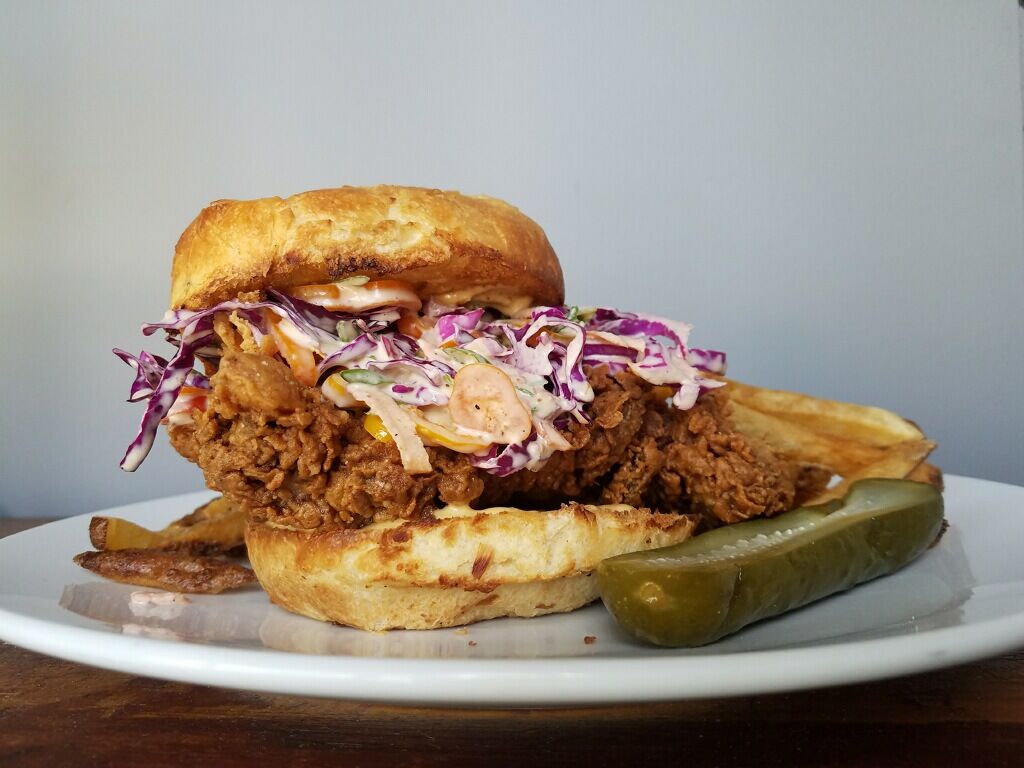 Every dad who stops by all Zea Rotisserie & Bar locations and Semolina, 4436 Veterans Memorial Blvd., for a Father’s Day meal this Sunday will be treated to a four-pack of Abita beer and a complimentary commemorative photo with their family.

Both restaurant concepts are the brainchilds of Hans Limburg, Gary Darling and Greg Reggio who together form the innovative culinary and restaurant development company Taste Buds that was named a “Top Workplace” by The Times-Picayune in 2017 and 2018.

The first Zea location opened in Harahan in June 1997 and now has grown to locations in the greater New Orleans area and beyond including Covington, Slidell, Lafayette and Baton Rouge. Zea offers modern comfort food including rotisserie meats, roasted corn grits and Thai ribs.

Pasta palace Semolina has received national recognition from the publication Restaurants and Institutions and was named “Hot Concept” by Nation’s Restaurant News. 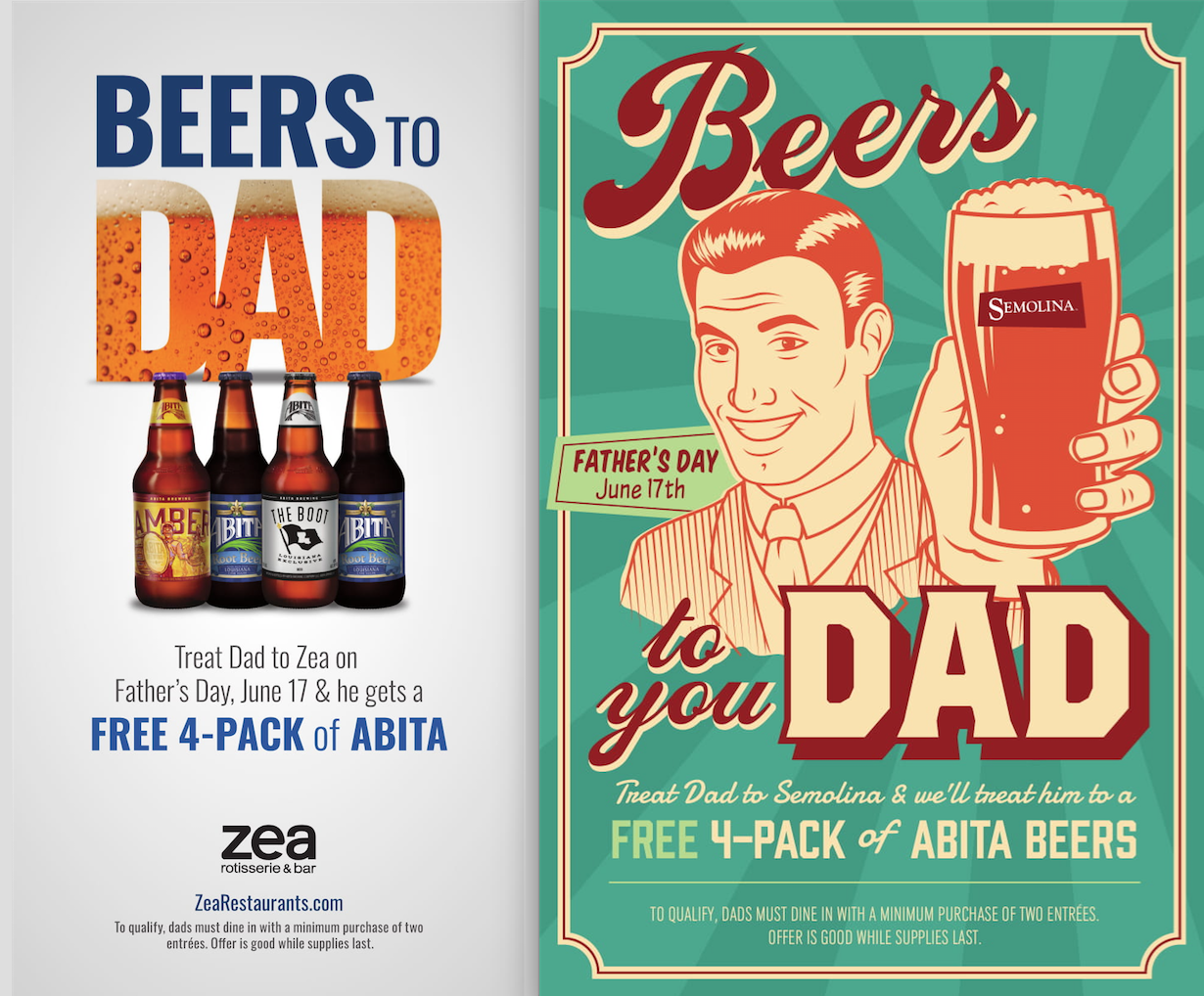 Dads who dine at Zea and Semolina on Sunday get some free Abita beer and root beer. PHOTO CREDIT: Taste Buds

If you’re still looking for a fun Father’s Day gift, give him a New Orleans-themed Tricentennial souvenir.

Multiple local artists have created mementos that celebrate New Orleans turning 300-years-old, an event that has attracted many guests and visitors to the city including dignitaries from more than three dozen nations.

“The New Orleans Tricentennial merchandise captures the true essence of the city, featuring classic items from local vendors,” said Mark Romig, president and CEO of the 2018 NOLA Foundation, the supporting organization for the 2018 Tricentennial. “We are excited to partner with these local artists and provide them with the opportunity to showcase their work, and we want everyone to be a part of history.” 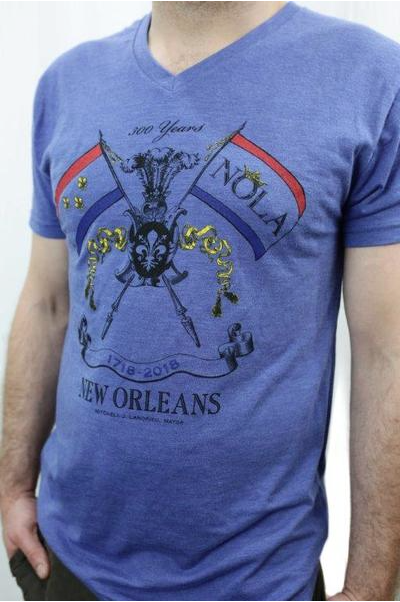 The official 2018 NOLA t-shirt by Dirty Coast New Orleans is a blue short sleeve v-neck made with a soft blend of cotton, polyester and rayon. Proceeds from this t-shirt support the 300-year celebration of the City of New Orleans. PHOTO CREDIT: Dirty Coast

Free froyo and discounts on meaty meals and celebratory cakes were discovered by the savings experts at Offers.com.

In New Orleans, they found:

• Get $3 off any Baskin-Robbins ice cream cake or cookie cake. Use the printable coupon or promo code here. Specialty cakes for Father’s Day include the Cold One Cake, which is shaped like a mug of beer.

• Dads dining at Fogo de Chao on Father’s Day will receive a free dining card valid for a complimentary lunch, Sunday brunch or dinner on their next visit.

• On Sunday June 17, Morton’s Steakhouse will serve a three-course prix-fixe Father’s Day menu for $59 per person.

• At Ruth’s Chris, Dads dining on Father’s Day and the day before, Saturday, June 16, will receive a $25 dining card.
The card will be valid from Monday, June 18, through Friday, August 31.

• Dads get their first six ounces of frozen yogurt for free on Father’s Day at TCBY.

At Cabela’s, you can get up to 50 percent off during the Father’s Day sale, which runs through Sunday and offers discounted items including tents, outdoor wear, grills, tackle boxes and more.

What Dad in New Orleans wouldn’t jump at the chance to see world-renowned, Greek composer, keyboardist, pianist and music producer Yanni in concert on Thursday, June 21, at the Saenger Theatre, 1111 Canal St.

In honor of Father's Day, the Saenger is offering 50 percent off select seats to see the iconic Yanni’s Acropolis Anniversary Concert Tour with password DAD2018. 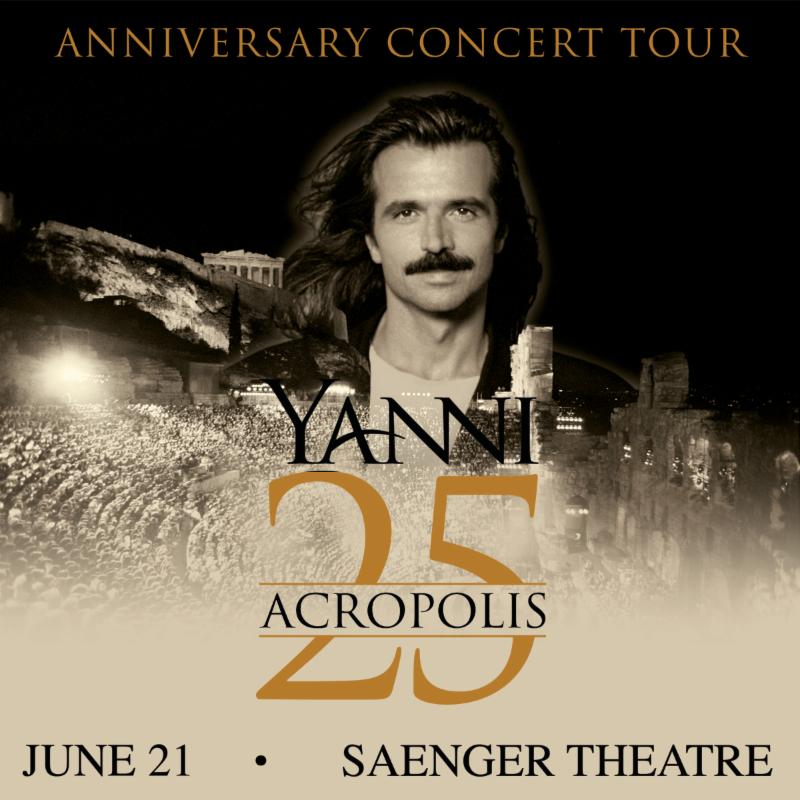 Yanni has been awarded more than 40 platinum and gold albums worldwide, has sold more than 25 million albums around the world and is one of the top global touring acts in the world. PHOTO CREDIT: The Saenger Theatre

The best thing you can wish your dad on Father’s Day is good health.

According to Ochsner Health System, chronic medical diseases like diabetes, obesity, hypertension, heart disease and high cholesterol are some of the common problems causing men to die prematurely while in the prime of their lives.

• Find a doctor. Choose one you’re comfortable with, so you can openly discuss all aspects of your health.

• See that doctor. Just because you are feeling well doesn’t mean you are well.

• Get informed. You do want to be knowledgeable and understand that you shouldn’t ignore symptoms or complaints, but you don’t want to self-diagnose. Also know which screenings you need and at what age you need them.

They say prostate and colon screenings should start at age 45.