BATON ROUGE – Governor John Bel Edwards has appointed Jerry Reyes as president of the Ernest N. Morial New Orleans Exhibition Hall Authority, the governing board of the New Orleans Ernest N. Morial Convention Center. Governor Edwards also appointed Don Hubbard as commissioner, who previously served on the board from 2005-2008 and again from 2011-2016. 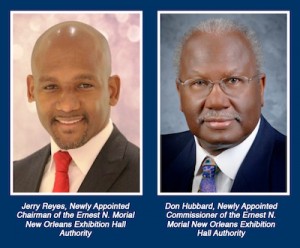 Reyes is a seasoned hospitality professional with more than 20 years of industry experience. He is a graduate of the University of New Orleans and currently serves as the general manager of the Westin Canal Place Hotel, a position he has held for three years. Under his leadership, the Westin recently completed a $30 million revitalization including renovations to all 462 guestrooms and suites, architectural improvements and an interior redesign. An MBA graduate of the University of New Orleans (UNO) Hotel, Restaurant, and Tourism program, Reyes has also been an assistant professor at UNO for the past two years.

“We are delighted to welcome Jerry Reyes as our new president, and Don Hubbard as commissioner for the Ernest N. Morial Exhibition Hall Authority,” said Michael J. Sawaya, president and general manager of the New Orleans Ernest N. Morial Convention Center. “Both of these business leaders bring years of leadership experience and a history of excellence in the New Orleans business community that make them  ideal choices to serve our governing board as we continue with a five-year $557 million comprehensive renovation and modernization plan that will establish the Convention Center’s competitiveness for many years to come.”

These appointments are considered interim, pending confirmation by the Louisiana State Senate.