Essence Exclusive: “Real Housewives” Parks To Be Honored At This Weekend’s Events 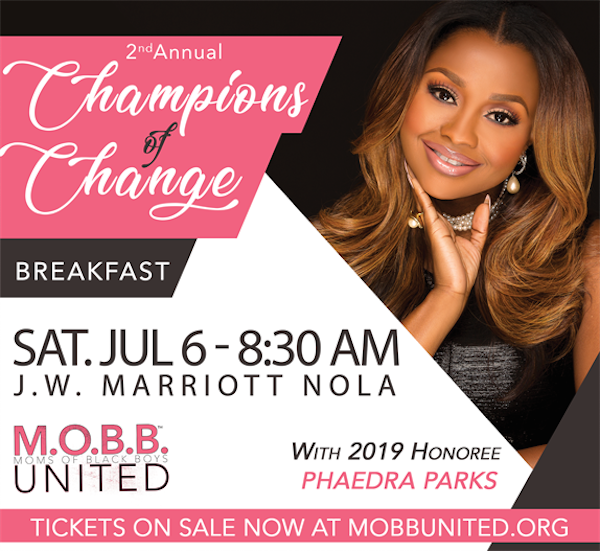 You may recognize Phaedra Parks from her seven season stint on Bravo’s “Real Housewives of Atlanta,” but she’s also an entrepreneur, an entertainment attorney, a best-selling author, a funeral director, and a social and political activist.

She lives a glamorous life in the tony Buckhead district of Atlanta with her two sons Ayden and Dylan, but it’s her work with fatherless boys and her nonprofit Save Our Sons that will earn her top honors this weekend at the Moms of Black Boys United, Inc.’s second annual “Champions of Change” Breakfast fundraiser, that takes place Saturday, July 6, in conjunction with Essence Fest.

The National Fatherhood Initiative has declared a father absence crisis in America, pointing to census data that reports 19.7 million children, more than one in four, live without a father in the home.

It’s a sad statistic that costs us all. The Initiative found about $100 billion dollars of taxpayer money is spent annually assisting father-absent families.

Through Save Our Sons, Parks promotes positive images of black boys and men and it’s a mission that closely aligns with that of M.O.B.B. United that’s celebrating its third anniversary this year. The nonprofit organization grew from 30 moms on Facebook to a nearly 200,000-mom membership, and it strives to change how boys and men of color are perceived in the eyes of law enforcement and society at large.

Starting today, M.O.B.B. United will inspire community activism and mental health awareness for black boys and men, and engage the anticipated half a million attendees at this weekend’s Essence Festival:

• Today through Sunday, July 7, M.O.B.B. United will host a booth at the Ernest N. Morial Convention Center where you can register for a M.O.B.B. United membership and register to vote via “BeWoke.Vote.”

•  TV personality Phaedra Parks for her work with Save Our Sons

Breakfast will include BBQ shrimp & grits, bacon, eggs and Cajun potatoes along with assorted pastries and beverages. Ticket sales will help fund M.O.B.B. United’s initiatives including producing community workshops and seminars, image campaigns and providing resources to Moms in need.

McCullers said after experiencing her son’s PTSD-symptomatic response to the police killings of Alton Sterling and Philando Castile in 2016, she decided to utilize her passion and marketing skills to help groom and grow a developing organization dedicated to providing support and a voice to moms of black boys.

McGruder and McCullers will be joined at the panel discussion by members of the Exonerated Five at 4:20 p.m.

M.O.B.B. United reps said they hope to connect and provide information and support for moms of black sons at the Essence Fest by applying a multi-pronged approach that includes media campaigns and storytelling, education and engagement, political and economic empowerment, self-care, strategic partnerships and sustained advocacy and community involvement.