Since taking over in January of 2019 as the third generation of Baumers to lead Baumer Foods — makers of the iconic Crystal Hot Sauce for almost 100 years — Alvin Adam “Pepper” Baumer III has been battling to lead the company through the pandemic and all its challenges. In this casual chat, he shares the big lesson he learned from aunt and great aunt Ti Martin and Ella Brennan about handling adversity, how his leadership differs from his dad’s, and the surprising way the hot sauce industry has begun mirroring the beer industry. 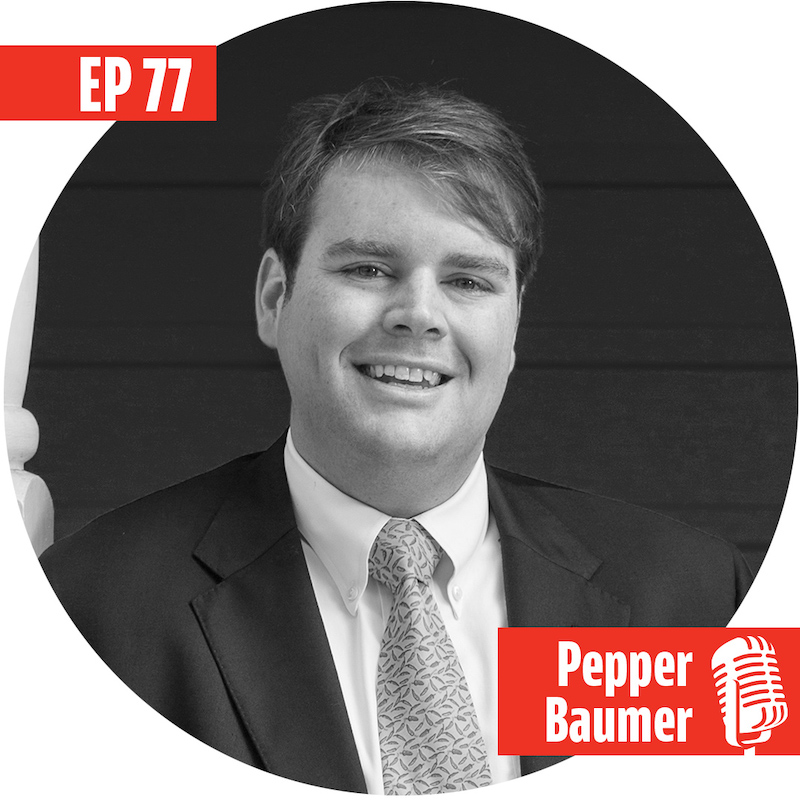 You don’t have to have voodoo queen powers to know that one day Alvin Adam “Pepper” Baumer III would become president of Baumer Foods in New Orleans. The writing was on the wall, or should we say, it was on the vintage neon “Crystal Preserves” sign you can still view from the 1-10.

Before Pepper, his father and grandfather led the iconic, nearly 100-year-old company that makes Crystal Hot Sauce. And, after all, he did receive the nickname “Pepper” in the womb by his grandmother Dottie Brennan, a member of the famous Brennan restaurant family. Some would say Pepper’s destiny was Crystal clear.

Still, as a student at the University of Alabama, Pepper majored in restaurant management with concentrations in marketing and computer science. After an internship as external affairs coordinator at The Idea Village, he began putting his marketing education to work with stints with New Orleans Tourism & Marketing and the New Orleans Convention Bureau. From there, he went on to work in marketing and operations for the Commander’s Family of Restaurants, under the tutelage of his aunt, Ti Martin. Pepper likes to say he got “an Ella MBA.” (Commander’s Palace legend Ella Brennan, Pepper’s great aunt and second grandmother, made him start every day by reading The Wall Street Journal from front to back.).

Today at Baumer Foods, Pepper has forged his passion for marketing, family and his love for all things New Orleans. He joined the company in 2014 in quality assurance and from there learned every aspect of the business. He become chief operating officer in 2017 and president upon his father’s transition to Chairman in 2019.

Pepper took over the reins of the company in January 2019, right before his beloved city would face the first wave of Covid-19. When Covid struck, he immediately looked for some way to help. As an avid festival goer and a lover of New Orleans music, he put his advertising agency to work creating a campaign that would help the artist community in New Orleans, who were out of work as a result of decreased tourism. After launching a new website for the company, Pepper’s first big push as president was to sponsor “Festing in Place,” a virtual Jazz Fest on WWOZ, followed by “Mardi Gras for All Y’all,” a virtual carnival celebration which streamed Crystal ads that celebrated (and employed) a slew of local muralists and musicians – not to mention a New Orleans film crew. The campaign tagline, “This is how New Orleans does flavor,” might as well have been “This is how Crystal loves New Orleans.” The multimedia campaign made Crystal top of mind and, most of all, gave the people of New Orleans a boost of pride when they needed it most. In addition, Crystal collaborated with MR EATWELL clothing brand to sell merch online. All the profits from this partnership were donated to the GNOF Hospitality Workers Fund.

Pepper takes his commitment to the community seriously. He currently serves on the board of the YMCA and is a member of the Greater New Orleans Next Gen Counsel. From 2012-2015, he was honored to serve as a member of the Young Leadership Counsel.

On a personal note, Pepper is married to Katie Deshautreaux Baumer who works as Operations Admin/Accounts Receivable at her family’s business, Gallo Mechanical. They welcomed their first child, a daughter Brennan “Brenne” Evelyn Baumer, in 2020.

Pepper is a die-hard Alabama, Pelican and Saints fan. His hobbies include ballgames, boating and, of course, babysitting. A self-described “extrovert,” he feels “weird” when he’s not around other people.