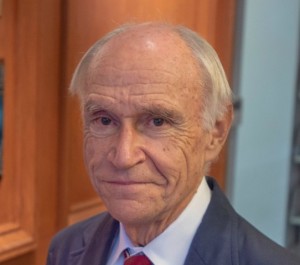 “The easiest way to make an enemy is to ask him to change.”

Oil and gas companies, of course, have financial incentives to maintain the status quo – and plenty of arguments to justify their stance. But Houk isn’t persuaded by any of them.

Argument No. 1: Constraining Oil and Gas will Kill Jobs

“The amount of employment in oil and gas is pitiful,” he said. “Everything is mechanical except for roustabouts out there on the rigs and the fat cats in the suits in the buildings … that’s it.”

“That’s why Biden is selling climate change as a jobs program,” said Houk. “It’s going to create jobs that will dwarf the jobs that are in coal, oil and gas. And those are dirty jobs. People get hurt. People get killed. The miners, the oil rig guys, that’s highly dangerous stuff. You don’t do that with renewables. So for a host of reasons, they’re blowing smoke. And they’re blowing smoke because they’re desperate.”

Argument No. 2: The Oil and Gas Industry Will Lead the Transition to Greener Energy

The industry says the best way forward is to avoid constraints so oil companies can lead green energy innovations – but Houk isn’t convinced.

“The fact is this industry has got to go,” he said. “It’s got to go completely. The idea that we keep it on for a bridge is a diversion. It’s not a bridge to anything, because as long as we keep committing ourselves to oil and gas, we’ll never get over the bridge. They’ll swallow progress on the other things.”

Equally worrying to Houk are the federal subsidies that support the fossil fuel industry. These include domestic manufacturing deduction benefits, deductions for non-drilling costs and rules allowing companies to recover the cost of their capital investments by deducting 15 percent of the revenue from the sale of oil and gas from their gross income. In Houk’s estimation, all of this money could be better spent.

“This is a highly incentivized industry,” he said. “Here are the wealthiest corporations in the world with forty billion a year in subsidies. Forty billion! If we gave half of that to wind and solar, they’d fly. They’d be the dominant market. The best studies show that if you [improve] the grid for energy conservation, go solar and wind and back it with anything like the money that we backed oil and gas, we’d be oil and gas and coal free within 10 years. It’s done, the job is done.”

In this regard, Houk thinks Louisiana needs to take a cue from Texas.

“Some of the oil revenue goes to solar and wind, and their state energy commission facilitates solar tie ins,” he said. “Louisiana being southern and on the Gulf has enormous potential for wind and solar, and lots of abandoned rigs out in the gulf that could platform wind farms.”

Argument No. 3: Limits on Oil and Gas Will Disrupt the ‘Downstream’ Supply Chain

Industry advocates say that a reduction in oil production will negatively affect “downstream” activities such as PVC manufacturing at petrochemical plants along the Mississippi River between Baton Rouge and New Orleans.

Houk said that’s fine with him.

“That’s another huge problem,” he said. “They produce the most poisonous products in Louisiana. The chemical corridor is full of them and people are dying. We have got to get rid of oil and gas in the same way we need to get rid of plastics.

“It’s going to be a harder go but there isn’t a plastic thing out there that doesn’t have a substitute. And we were doing fine eating and doing other things without the plastics. You can have plastics for medical uses and things like that, but the idea that you’re hiding behind plastics in order to keep oil and gas going, that’s the wrong [place to] hide.”