NEW ORLEANS — Restaurateur and hotelier Robert Thompson has started a new chapter of his career after moving to New Orleans with his family in 2021 and purchasing two of the city’s historic hotels.

Based in Denver until recently, Thompson has owned and operated food and beverage establishments for more than a quarter century. He’s earned four “best new restaurant” awards for various concepts. Most notably, he founded and built the 20-unit “eatertainment” concept Punch Bowl Social, which landed on Fast Company magazine’s list of the 50 most innovative companies in the world and garnered Thompson recognition as a 2017 Ernst & Young Entrepreneur of the Year. 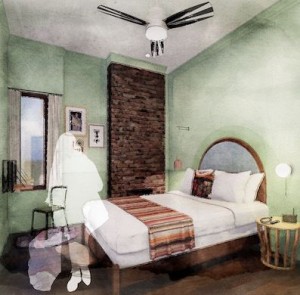 Now, this serial entrepreneur has sold his Denver mansion and settled in the Crescent City to lead a new hospitality company called Angevin & Co. It was time for a change, he said during an interview for this week’s Biz Talks podcast.

“A lot of us have had some inflection associated with the last two years,” said Thompson. “And I’m very passionate about hotels and have been trying to pivot in that direction for a number of years. New Orleans is my favorite city on Earth and so I’m extremely familiar with it. … I made a decision both personally and professionally that I was going to make this move and jump in with both feet.”

After starting Punch Bowl Social in 2010, Thompson grew the Denver-based bowling, arcade and restaurant chain to 20 locations and a reported $120 million in annual revenue. He also helped raise money from several major investors. But in 2020, Thompson stepped down as CEO after the pandemic changed the equation for a business that relied on large gatherings and group sales to be profitable.

“I’m extremely proud of [the project],” said Thompson a year and a half removed from his departure from the company he created. “I’ve been an entrepreneur in the industry for 25 years, and I spent about 11 years of that time focused on Punch Bowl Social. We grew it at a rapid-fire pace because it resonated extremely well with millennials and Gen Z and was an extraordinarily authentic experience for the guests. … But the summary is that in 2019 we were on Fast Company’s ‘most innovative’ list and, in 2020, we were on the COVID list. The universe throws curveballs, but I guess I’m adept at hitting curveballs, so I made a pivot. I let the universe dictate and I reacted as best I could. And here I am.”

The 27-room Frenchmen Hotel, Thompson’s first local project, will open in February at 417 Frenchmen Street with a new look and an enhanced foodservice component that will include “drink-forward” menus. The Whitney, a much bigger undertaking at 93 rooms, will begin its transformation soon in the hopes that it can open before Mardi Gras next year.

“We actually toured the Whitney before the Frenchmen,” said Thompson. “But it was a bigger deal and more complicated. The Frenchmen [allows us] to dip our toes in the water and prove that we understand how to develop a hotel because of our experience with Punch Bowl Social. Those are all 25,000-square-foot boxes, an extraordinarily complex concept model.” 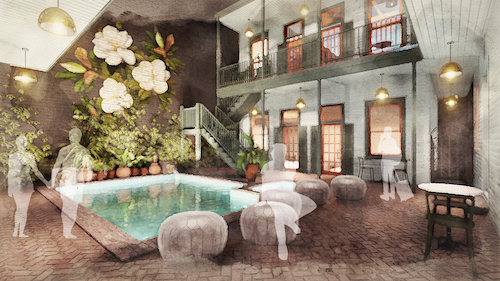 The Frenchmen’s pool will be a gathering spot.

When it reopens, the Whitney will have a new name, inspired by Thompson’s fictional muse, “an Irish immigrant who came to New Orleans in the 1800s, lived in the Garden District and owned a flower shop by day and spent time in speakeasies by night.” It’s all part of the playbook for this philosophy and history major who also enjoys making deals.

“Taking a blank sheet of paper, and being able to develop a new concept from nothing is what gets me out of bed in the morning,” said Thompson. “It makes my socks roll up and down by themselves. … If I can create a narrative and defer to that narrative as my muse and my framework for a concept, that bleeds into the interior design process, which is related to the architecture and then gets into culinary program and the craft beverage program. It really helps keep us on track. So it starts off in a place where I’m comfortable with just storytelling and then we continue that storytelling process throughout the development side of this thing and straight on into operations.”

In general, Thompson is bullish on the hospitality industry overall and in New Orleans in particular.

“Leisure travelers came back out en masse in 2021,” he said. “Even though they kept getting gut punched by Delta and then Omicron. But New Orleans is going to continue to thrive based on its history and its rich culture, which attracts people from all around the globe. So I have an extremely rosy outlook for 2022 and especially 2023 as it relates to getting back into group travel.”