Effective to the Corps

The link between the Consular Corps and Louisiana

For nearly a quarter century, Greg Beuerman has been part of the Louisiana Consular Corps, even serving in various officers positions throughout the years.
As you might have deduced from his last name, he’s got some German ancestry.

No branches of his family tree, however, stretch to Iceland. Yet since 1994 he’s been proud to be the Honorary Consul for that country, performing the day-to-day duties of the position with gusto and proudly waving the flag for its tourism and seafood industries whenever possible in Louisiana, Mississippi and Alabama.

Beuerman, who runs a public relations/marketing firm, was recommended by the Trade Council of Iceland to a client in the early 1990s, and was specifically tasked with connecting those officials with leaders of the Gulf seafood industry. Beuerman helped foster a relationship between his client and those local companies, landing tours of Louisiana-based oyster, crab and fish processing plants.

“Everything went well, and soon thereafter — well, a couple years after — the Trade Council representative asked if I’d be willing to serve as the Honorary Consul for them for Louisiana, Mississippi and Alabama,” Beuerman says. “And it’s interesting, ever since dating back to middle school, I’ve always been fascinated with Iceland….It’s an amazing little Mighty Mouse of an economy. Amazing, resilient people who are extremely creative. And it’s been a great honor to work with them.”

Iceland is one of roughly five dozen countries represented in the Louisiana Consular Corps, a collection of mostly Honorary Consuls who for the most part serve the same function as full-time Consuls and General Consuls. Down here, that means working closely with economic development organizations on all levels of government to foster trade opportunities and the exchange of goods and services between the country of the Consul and the Gulf South states. In addition, Consul Corps reps assist with the passport/visas process, assist countrymen who get arrested or fall ill while here and often serve as representatives of their country at an array of civic occasions.

The Louisiana Consular Corps maintains strong relationships with the World Trade Center of New Orleans, the Mayor’s Office of New Orleans and the Louisiana Dept. of Economic Development — building a bridge between industries abroad and regional leaders in hopes of harboring a partnership that will be beneficial both there and here.

“Each of the Honorary Consuls fills a different role,” Beuerman says. “There are numerous consuls who are deeply involved in the shipping industry — Norway, Serbia, Brazil come to mind. So they have a deep understanding and engagement with the maritime community, as you might imagine. Others, their work tends to be more related to retail, consumer goods, technology. For example, a Japanese tech company might want to make an impact in the Gulf South. Then, you have roles like mine with Iceland where you’re looking for platforms for cultural and educational exchange to help promote tourism.

“A lot of people ask me, ‘What’s Iceland like?’ And I answer somewhat tongue-in-cheek that it’s just like South Louisiana,” Beuerman continues. “And that draws a strange look, but in a way it’s true. Their economy is built on the same pillars as ours — tourism, fisheries and energy.”

For Constance Willems, a New Orleans-based civil litigator and the Honorary Consul of the Netherlands and the Corps’ Dean from 2013-2014, the highlight of her economic development efforts occurred in the aftermath of Hurricanes Katrina and Rita little more than a decade ago. Like the city of New Orleans, a large area of the Netherlands (roughly 26 percent) sits below sea level while half the country is no higher than 3 feet above sea level. Because of that, Willems says, the Dutch are experienced at water management and various Dutch companies came to South Louisiana to assist in recovery efforts. Willems linked those Dutch water-management companies to suitable partners both private and political, after which they helped design more modern pump stations and levee systems.

Those businesses and many others were featured in an organized directory Willems spearheaded during her tenure as Corps Dean. The booklet features all the Honorary Consuls and General Consuls and provides a breakdown of that country’s top exporters, companies from that country who already do business in the South, and general economic statistics.
“Beyond just having that for a tool, I think it was important to show the number of jobs created by the 56 countries of the Corps,” Willems says. “I believe it came to close to 72,000 jobs directly related to the exports of these countries and foreign investments….it just shows the impact the Corps and those who work with the Corps can have and do have.”
While each Consul works mainly as an individual, the Corps does come together and work as a collective unit fairly often, especially when it comes to recruiting countries to join the Corps and identifying qualified Honorary Consuls for additions.

“In New Orleans and the surrounding areas, we are a cultural melting pot,” Beuerman says. “And we pride ourselves as a state and as a people in being just that — a place with an immense amount of cultural and historical diversity. And given the Corps’ connectivity to the Gulf South region, it only furthers diversity — bringing together businesses and all these other things from around the world and linking them to Louisiana.” 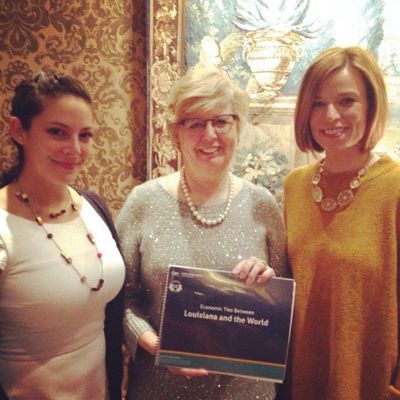 Zhandra Mann (left), Jessica Steverson (right) of the World Trade Center in New Orleans and Constance Willems (middle), former Dean of the LA Consular Corps and Consul of the Netherlands discuss the publication of Louisiana and the World,” featuring import and export data and jobs created in Louisiana by the 56 countries with a consular representation in this state.