Ben Matheny grew up on the Mississippi Gulf Coast dreaming of breaking into film and television. Six years after graduating from UNO Film School, he is producing and starring in his first feature film. He says he owes it all to the incredible support and infrastructure in place in Southeast Louisiana.

“It’s almost Rockwellian, the community that we’ve built here,” Matheny says, speaking about how easy and fun he says it was to find a good crew for his new indie comedy “Easy Does It,” which just wrapped principal photography June 3.

The friends are chased by two lawmen — “Mad Men” star Bryan Batt and Dwight Henry, who has made a name for himself in films like “Beasts of the Southern Wild,” “Birth of a Nation,” and “12 Years a Slave.”

Matheny is quick to say that, while he’s thrilled with how well the process is working, making an indie film was still no easy feat.

“‘Easy Does It’ actually started as a short film that Will Addison came up with back in 2013,” he says. Matheny met Addison, and his entire team at EFI Productions, while attending UNO film school. “Will came to me to help write a feature film version.”

In late 2014, EFI Productions paired with Worklight Pictures to make a proof of concept trailer. In 2016, the project ran a Kickstarter campaign to try and secure some funding.

“Getting an indie film made is one of the great challenges in life,” Matheny says. “Like drawing a perfect circle. But all the time it took us, we just looked at that as time we could spend strengthening the project.”

Matheny says the real turning point for the film was meeting Alexa Georges through the New Orleans Film Society last year. Georges agreed to serve as executive producer for the project.

“Alexa is a natural as a producer,” Matheny says. “She has such deep connections to this community and really helped with getting capital, securing locations and finding actors.” 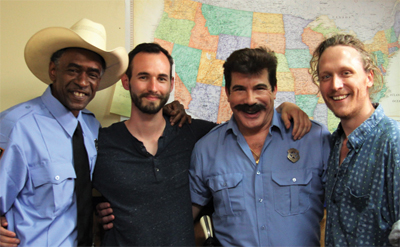 Dwight Henry (left) and Bryan Batt (second from the right).

“Easy Does It” was filmed almost entirely within a two-hour radius of New Orleans.

“We have characters who are supposed to be traveling from central Southern Mississippi to the California border and we were able to film almost all of it in Louisiana,” he says. “We’re just taking a road unit out to West Texas for a quick trip to grab a few shots.”

Once the film is finished, the next hurdle is distribution. Here, he says, is where having notable actors like Batt and Henry will hopefully help.

“Getting distribution for any film is difficult,” he says, “but we’re hoping that having these lovable, recognizable, deeply talented actors will help.”

When asked about a timeline for the film’s release, Matheny says he had no answer.

“We’re hoping to try out the film festival circuit, but as an indie filmmaker you have to work at the whim of chance,” he says. “I wish I knew.”

Matheny is sure of one thing though, he says his choice to come to New Orleans after high school to go to UNO film school was the best decision he could have made.

“Being here in a city so full of great artists and actors has been incredible,” he says. “And for me, getting to work on big name projects like ‘American Horror Story,’ when that was filming here, helped give me the kind of hands-on experience that I needed to take the next step.”

“We’re experiencing a real independent film wave here,” he says. “I think this is just the beginning.”