“We are excited to announce that early registration for the annual Turkey Day Race, which is produced by the New Orleans Track Club, is now open; and we are hopeful to increase participation from 3,500 runners to 5,000 runners,” said Trisha Langlois with the New Orleans Athletic Club. “Our partnership with Spina Bifida of Greater New Orleans is a huge part of this race because we are able to raise significant funds to go towards the mission of this outstanding nonprofit organization through running! This gives families in need the assistance necessary to care for their loved ones.”

Spina Bifida of Greater New Orleans provides support to individuals in Louisiana born with Spina Bifida, and their families, while also increasing awareness about Spina Bifida and its prevention. The VOA Lighthouse Program is an afterschool outreach for kids that teaches conflict resolution, acceptance of responsibility, and discipline through martial arts, while also offering educational help through tutoring sessions.

According to Ron Schulingkamp, with Spina Bifida of Greater New Orleans, “We are extremely grateful for the money raised on behalf of our organization at last year’s Turkey Day Race and we look forward to an even more successful year in 2016.  This has been a key fundraiser to produce our children’s summer camp since the 1980’s, and we appreciate the New Orleans Athletic Club for supporting our charity”

The New Orleans Track Club is a family friendly organization catering to runners, joggers and walkers alike. The Club organizes running events of all distances and types. Its mission is to produce and promote running events both as a competitive sport and as one of the best athletic activities for achieving physical and mental fitness.

Established in 1872, the New Orleans Athletic Club is one of the oldest athletic clubs in America. The Club was conceived in the youthful mind of J.C. Aleix, who decided to build a gym in his back yard. The Club continued to grow and moved to its elegant 222 North Rampart St. home in 1929. Over the last several years, the Club has experienced major operational and infrastructure modifications with the concept of blending the Club’s congeniality, serenity and architectural significance with its advancement to the forefront of fitness, health, athletics and nutrition.

Register for the race here 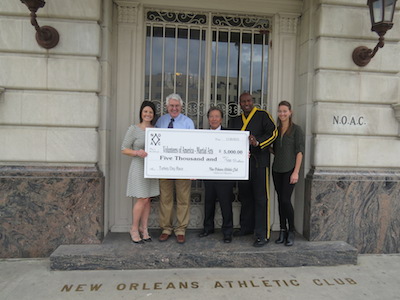