Landbros Aerial Photography showcases the positive side of this often-vilified technology.

It seems that drones are always making their way into the news — and it’s not typically positive.

We’ve all heard about their military use overseas, how they’ve acted as drug mules for prison yards, how a father once shot one out of the air and was arrested, and even North Dakota’s new law legalizing law enforcement to use armed drones.

Of course there’s also Amazon’s recent announcement of programs like Amazon Air, which will allow them to deliver packages via unmanned aerial vehicles (UAV) — a perfect example of how drones are destined to be a large part of America’s technological future. Some estimates project that in two years we might see 30,000 UAVs flying overhead at any one moment in United States airspace.

But should this be a scary thought? A local company, Landbros Aerial Photography, says not necessarily, and certainly not in their case.

Founded a year and a half ago by Baton Rouge brothers Danny and Kevin Landry, Landbros uses drones to offer commercial photography — both still photos and video — to construction and real estate firms.

The new company has even supplied its services to The New York Times.

“We’re very diverse in terms of our capabilities,” says Danny Landry. “We’re a lot further than, say, a startup company since we’ve been doing this for a while. We do mapping, 3-D modeling within mosaics, thermal imaging, and general photography and video as well. People use our work in a bunch of different ways, whether it’s just to document something or create an ad to use for their marketing.”

The Landrys first started the company in 2014. In early 2015, they were among the first 500 applicants ever — and first company in Louisiana — to obtain a commercial exemption from the Federal Aviation Administration (FAA). The exemption allows them to fly UAVs under 55 pounds up to 200 feet above the ground for commercial projects.

One of the company’s main focuses is to offer high-quality aerial photography while maintaining and heightening workplace safety. It’s a subject that the brothers feel particularly passionate about because of their backgrounds.

How they got started

The Landrys have two particular characteristics that have helped them gain footing in the industry: Landry has been an RC  (radio control) hobbyist since childhood, and their family has a background in construction work.

“My dad owned a small construction company, and I worked construction my entire life pretty much until college,” Landry explains, citing his more than 15 years of construction experience. “I was always a bit of an RC junkie, always playing around with RC vehicles and little copters and stuff like that.”

After he returned from college, Landry upgraded his RC helicopter to a full drone and started trying out the more advanced vehicle. Still only a hobbyist at the time, he had no idea this would turn into a career. 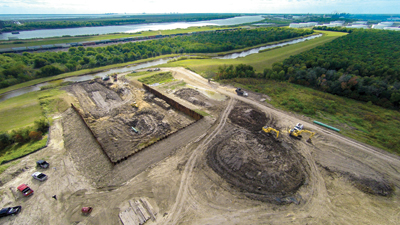 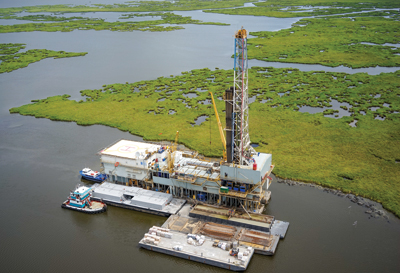 LEFT: An image for an inspection progress report taken of industrial pipe being laid under the Mississippi River in Port Arthur, Texas. RIGHT: A marsh drilling rig in Galliano, Louisiana.
Photos courtesy of Landbros Aerial Photography

“It was right when they were coming out with the consumer-grade drones that were not the traditional RC helicopters,” Landry says. “They were finally accessible to pretty much everybody. So I got one of those and put my skills from my entire life into learning that, and then from there expanded. I quit my full-time job, and I’ve been doing this for about a year and a half, since I started the company.

But getting to a point where they were legally allowed to work commercially took a good deal of work. The FAA restricts commercial use of drones, so without the commercial exemption they received, Landbros would not have been viable as a company.

Getting the word out

Landbros hasn’t had to do too much work to get its name in the hands of potential customers. Their history and connections within the construction industry have allowed them to find steady work. Landry worked within the marketing and branding industry after college, and though he says that experience has been beneficial, “we don’t really spend any money on advertising or anything like that,” he says. “For us, we didn’t really do any of that. It’s more so connections. Building those and delivering a quality product – people talk. Everybody says word of mouth, right?”

With word of mouth alone, the Landrys have been able to create a constant stream of business. But they don’t just wait for the phone to ring.

It helps that the brothers are drone junkies — using Google alerts to make sure they are the first to read about every bit of industry, keeping abreast of industry trends and challenges that could affect them and remaining on the frontier of drone technology in Louisiana.

“I follow the industry,” Landry adds. “It’s really exciting to see the new stuff because there’s new stuff every day. For us, we’ve been at the forefront of it all. We haven’t been at the forefront of it globally, but in Louisiana, in our industry—construction—we are. It’s a really cool industry, but it’s also starting to become competitive. I’ve been very busy, and there’s a lot of opportunity.”

The importance of safety and the challenge of perception

The biggest challenge Landbros faces is the perception of UAVs. Landry specifically mentions that some drone pilots have had near misses with airplanes by flying drones too close to airports. That’s where the importance of safety comes in for him — he feels that by remaining vigilant about his own safety protocols, the company may help to change some of the negative views.

Landry says he’s a real stickler for rules his customers trust him.

What are those rules?

“It’s basically a preflight checklist: full safety gear, not flying within 5 miles of an airport, below 200 feet off the ground, line of sights so you can always see it,” he says. “These are all basic safety restrictions, but a lot of people don’t obey them. Really it’s just about following the rules.” 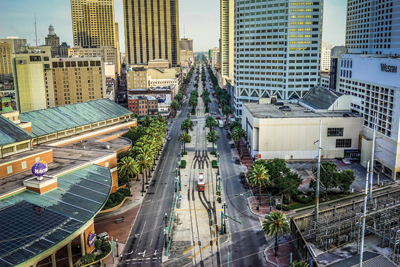 This is, again, where the Landrys say their background and experience comes in handy.

“For us, having that construction background, we’ve definitely got the edge against our competitors because we are much more experienced in that market. We understand it, we understand the people, and we know what they’re looking for.”

The future of the industry

Many people come to Landry to speak about drone safety, but they also often have questions about the future of the industry. What will its role be? What markets will expand to include it? They are questions that require long answers, but he says he sees many different applications for UAVs. From farming to real estate, the ability to use drones is wide open.

“I think it will become more and more prevalent in real estate,” Landry says. “You’ll see a lot of companies pop up to provide that service for agents. We’ve already seen a lot of it in agriculture, tracking crops and things like that. In construction it will continue to be used to make job sites safer and more efficient. That’s what they do. They can create a safer environment in any industry. They can do surveying work, crop analysis work—they’re getting more and more intelligent. They have sonar sensors and things like that on them now. Battery life is getting better and better.”

“It’s crazy to think about what the future is going to look like, but there will be a lot of drones and UAVs in the future,” Landry says. “They will be in the air and people will see them, and there will be that initial freakout. Hopefully the government can keep up with the technology and create it so that it’s safe and there aren’t more near misses and issues.”