Since Aaron Dirks and his wife, Christy, took over Limousine Livery in 2006 they have managed to increase business by 500 percent – transforming the luxury car transport service into an international logistics management business, with a bit of lagniappe.

“We have grown the company rapidly, but it has also been with technology integration and sustainability in mind,” says Aaron Dirks, who serves as director of business development. “We were one of the first sustainable luxury fleet cars in America and we always pride ourselves on being forward-leaning with sustainability and technology.”

With operations rooted here in New Orleans, Livery has branched out across the United States and abroad, with an increasing portfolio of integrated technology solutions that enhance the traveler experience – Limousine Livery is setting themselves up to propel forward at a rapid pace.

Thirty years after a bellman was handed the keys to a Rolls-Royce and told to make some money out of it, Limousine Livery now boasts a fleet of 70 luxury vehicles, a third of which is limousines. Services cover the full spectrum; airport transfers, festivals, funerals, the film industry, oil and gas, weddings, and everything in between.

“A good percentage of our revenue is from managing transportation outside of New Orleans on behalf of corporations and meeting and events,” Dirks says. “But it is the visitors to New Orleans who make up 50 percent of the revenue of our company – from conventions, Mardi Gras, Jazz Fest and doctors’ groups.”

The relationships that Livery has built in the Louisiana market – particularly within the film and oil and gas industries – have enabled them to extend further into markets in California and New York, and broaden their reach worldwide in approximately 300 destination cities.

“It took us about three years to build what is called an affiliate network,” Dirks explains. “We had to go out and research who the best companies were, and contract with them. So our work is being fulfilled by a local partner, but they look and feel like they are part of our family.”

An Answer to Uber

A self-professed technology geek, Dirks focuses his attention on integrating technology into the business. He has developed both a ground transportation booking service aimed at changing the entire airport arrival experience, and a kiosk that enables travelers to book tours and attractions from their hotel – but it is his app designed to take on the big guns, like Uber, that has been attracting the most attention in the past few months.

In answer to the September 2014 launch of Uber (a company that uses a smartphone app to connect those in need of transportation to vehicles for hire) into the New Orleans market, Dirks countered with his own smarphone-based ground transportation tool that connects riders with luxury vehicles. The Livery Car app – launched December 2014 – provides riders with a higher-end experience at a competitive price.

Simple to navigate, riders simply plug in their destination and the Livery Car app gives them a rate, along with a picture of the driver and an option to call them. Unlike Uber, Livery Car also offers riders the ability to book rides up to eight days in advance.

“There are a lot of advantages that we can provide as a local company that Uber cannot,” he says. “We have 150 local employees and an office that you can come and visit. You can call a phone number if you want to talk to someone. We have a 24-hour dispatch center that handles luxury all day long.”

In Uber’s business model, the company collects up to 25 percent of every fare, a fare that is sometimes determined using dynamic pricing (or “surge pricing”) – a system where a computer determines what to charge a customer based on supply and demand.

“I avoid dynamic surge pricing,” he says. “I believe that you need to do something like that for Mardi Gras and New Year’s Eve well in advance. The other 98 percent of the time it should be a flat charge.”

Livery also partners with independent operators around New Orleans, but takes a smaller commission – 10 to 14 percent. In reverse, if the independent operator gets a job they can’t fulfill, then they send them to Livery to perform for a share of the fare. This cooperative model not only increases Limousine Livery’s fleet, it also makes the company more efficient in the shorter rides market. 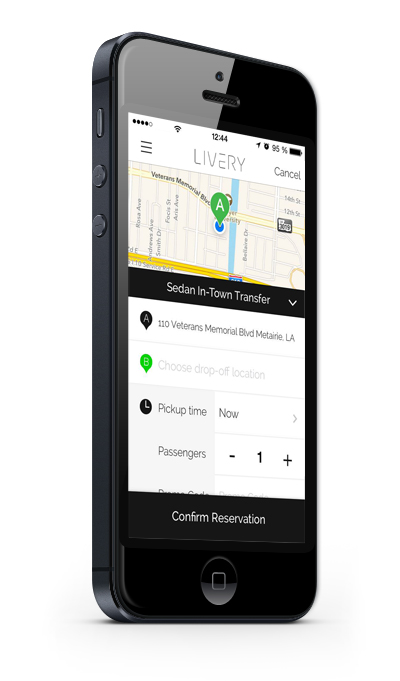 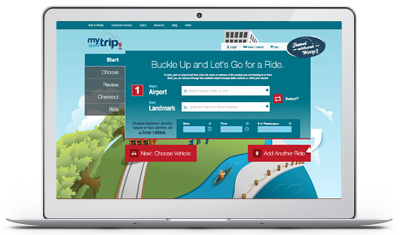 Launched in 2009, MyAirportTrip.com allows travelers to access all the airport transporation options available to them at a destination and then book their choice. The Livery Car app, launched last year, connects riders with luxury vehicles.

Before the Livery Car app there was MyAirportTrip.com, a website that Dirks developed and launched in 2009. The website allows travelers to book ground transportation online – be it a shuttle, taxi, or black car service anywhere in the world. With one destination, travelers can now access all the car service options and their costs – allowing them to compare and book all on one site.

“There is no app for MyAirportTrip.com,” Dirks says. “The main reason was because when I became aware of Uber and what other technologies were starting to do in connecting drivers with passengers using cell phones, it was illogical for me to enhance this solution.”

Dirks says Limousine Livery has always been in the business of tours – as it’s common for luxury guests to request guided tours with their black car service.

“In the last two years we have significantly grown our tour operation,” he says. “Livery Tours is now the fastest growing tour coordinator and operator in New Orleans. We now own and operate our own luxury haunted and walking tours of the city.”

Beyond offering its own line of luxury tours, Limousine Livery is now partnering with other tour operators to provide visitors with a way to book any tour online. While still in its early stages, Dirks says he has developed a technology that aggregates all of the tours and attractions that are available to hotel guests and plans to roll out the new feature soon.

“We are taking all the benefits of the technology and we are marrying them with the benefits of having operators in local markets,” he says of his technological projects. “We are putting them together in a way that is not currently being done.”

Once the company has things rolling in the New Orleans market in the way they want, Dirks plans to start rolling his business model out across the United States.

“The model we are building we are replicating basically through a distributorship,” he says. “We will have market managers in each market, taking solutions into other cities around the country.” 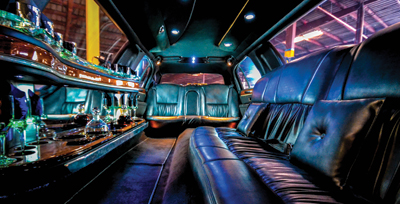 For years, Limousine Livery has been catering to luxury clients who often request specialized city tours. Expanding on that, Dirks says Livery Tours is now the fastest-growing tour coordinator in New Orleans.