Down by the Riverside

A formerly “cursed” space becomes a blessing in disguise for Riverwalk’s corporate offices.

Howard Hughes Corp. completed redevelopment of the Riverwalk shopping area in fall 2014, transforming it into the Outlet Collection at Riverwalk, the first upscale outlet center located in a downtown setting in the nation. Part of the expansive project included renovating and updating the company’s location-envy-inducing offices.

“The offices, while outdated, were in good condition,” says Frank Quinn, general manager of the Howard Hughes Corp., The Outlet Collection at Riverwalk. “After a year of construction dust, grime, intermittent power and pluming outages [in the rest of the building], they went downhill.”

Quinn worked with Jennifer Kelly of Design Lab for the project. Some of Design Lab’s previous projects include Tableau, Dickie Brennan’s restaurant on Jackson Square, as well as Crescent City Brewhouse and the Rice Mill Lofts.

“They definitely wanted to have a slick, modern, up-to-date office that reflected what the Riverwalk would be,” says Kelly.

Kelly drew inspiration for the overall theme from, as you might have guessed, the location. Playing off the expansive views of the Mississippi River, the color palette — once a dated, 1980s-style pink and green — is now serene shades of blue, gray and white.

The office’s inspiring riverside locale and views came about in an unusual way. In 1996, a 763-foot, loaded bulk cargo ship, the Bright Field, lost power and slammed into the mall. Quinn says this informed the decision of placing the offices in the middle of the mall, due to the fact that none of the tenants wanted their businesses located in the “cursed” space damaged by the ship. This assumed curse, however, ended up being a blessing in disguise.

Quinn says the tenants enjoy easy access to the leasing offices, not only for dealings with the staff, but also because they borrow the conference room for staff meetings, training and presentations. 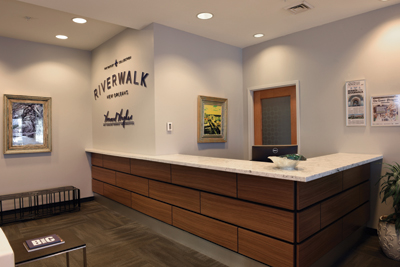 The welcoming reception area features a marble-toped desk fronted by wood veneer panels. The company’s logo is emblazoned on the wall and visible as visitors enter the suite through the glass door. 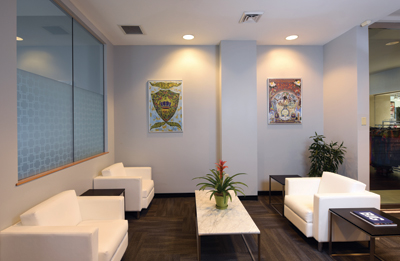 The airy reception area sets the stage for visitors, with a marble-topped welcome desk, fronted by wood veneer panels.

“We did a custom-designed entry, where you have a real sense of arrival,” says Kelly. “We put the logos and signage on the wall. [The main entry door] is clear glass and you see right into the wall with the logos.”

The conference room is located to the side of the reception area. It features a wall of windows, taking advantage of that river view, and the custom conference table includes charging and USB stations. The marker board is hidden inside a sleek birch panel cabinet bearing the company’s logo. Kelly covered large windows between the conference room and reception area halfway up with a translucent patterned film to offer privacy during meetings and also allow the flow of light between the rooms.

Prior to the renovation, the break room and copy room were one combined area. Kelly created a dedicated kitchen and separate copy area. The new kitchen has an ample bank of gray cabinets with a white, vertical subway-tile backsplash and siltstone-quartzite countertop, a rustic farm-style wood table, modern white chairs and a TV mounted to the wall.

Quinn, who has been the general manager since 2011, undoubtedly enjoys the largest office in the suite and one of the best views of the river in all of New Orleans. Here, Kelly created a casual seating area with a low-slung, white leather sectional and contrasting black ottomans that function as a coffee table. Quinn says that since the renovation, the office has welcomed many more visitors and he enjoys having the more casual seating area in his office for less formal meetings.

“A few times a week we have cruise ships that dock outside our food court,” he says. “We see the massive cargo ships that come in and out of the Port of New Orleans and the cruise ships departing with people dancing on the deck.”

Because the company has so much space, Quinn says corporate visitors from Howard Hughes’ branches all over the country often come and work during large city events, such as Carnival and the New Orleans Jazz and Heritage Festival. When asked about his favorite aspect of the design however, Quinn doesn’t hesitate with a response.

“New Orleans will forever be tied to its location next to the Mississippi,” says Quinn. So few New Orleanians will ever get to see the river. I’m truly lucky to walk into an office and see it every day.” 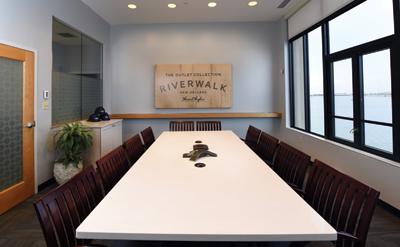 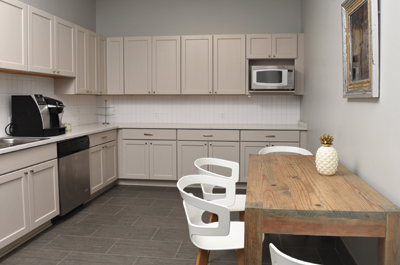 The break room used to serve also as a copy room. Kelly split the rooms, designing a dedicated kitchen with homey touches, such as the rustic farm-style table and bank of gray cabinets with a white, vertical subway-tile backsplash. 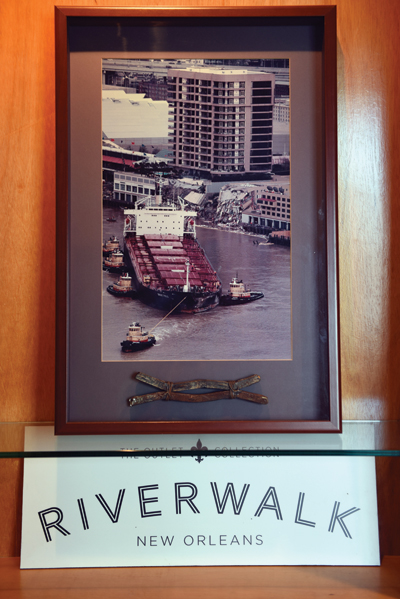 A photo in the hallway depicts the 1996 incident when the 763-foot, loaded Bright Field bulk cargo ship slammed into the mall.