Don’t Get Mad, Get Paid

Simone Spence is revolutionizing the fight for unpaid child support. 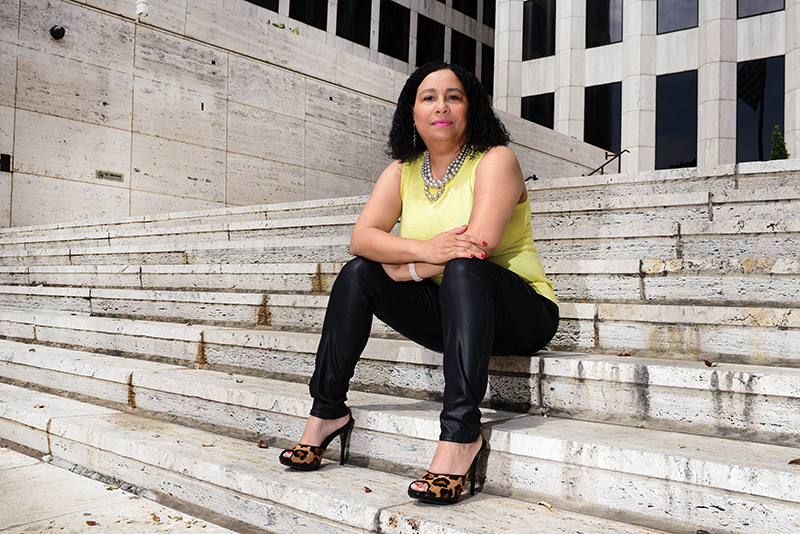 Simone Spence of Don’t Get Mad, Get Paid

OF THE MILLIONS OF AMERICANS WHO qualified for the recent stimulus checks, there’s at least one group that will not be receiving money — those who have been reported to the U.S. Treasury Department for owing back child support.

And that’s not a small number. As of January 2018, there were 13.6 million custodial single parents living in the United States, and approximately half have some type of legal or informal child support agreement in place.

New Orleanian Simone Spence knows the struggle all too well. During her own efforts to track down child support for her daughter 25 years ago, Spence spent years researching the ins and outs of child support collection and quickly became, in her own words, the “kitchen table expert,” with friends and other moms reaching out to her for help and advice.

After writing two books, testifying in front of Congress, and conducting speaking tours across the country on the subject, Spence transformed her know-how into a proprietary technology platform called Athena designed to streamline the process for parents looking to collect. The result was the creation of a new business last fall that Spence called Don’t Get Mad, Get Paid.

“I had been a private child support consultant for over two decades,” Spence said. “During that time, I had helped more than 10,000 women to collect more than $15 million in back child support, and I had an 87% success rate. I never had to market and never advertised because my customers found me on their own, were referred [or] read one of my books, that type of thing. At some point, I began to realize that this business was much bigger than I am and that the type of service that I provided needed to become more accessible to women across the country. It was then that I began to design the product that we have today.”

“I can’t say too much about the technology without giving away some of our secret sauce,” she said, “but I will say that at a high level, it works like TurboTax meets LegalZoom. We gather the critical data about our customer the way that TurboTax does, questionnaire-style. We find the paying parent and his assets and income streams and then, like LegalZoom, we generate legal documents for our customers. The documents are state-specific, customized and ready to use.”

In addition to local investments, Spence was able to gather a team of tech-savvy supporters through a global accelerator program called Techstars, whose mission is to help founders through mentorships and partnerships.

“I earned a spot in Techstars last year and participated in their Impact Cohort in Austin, Texas,” said Spence. “Over 1,000 companies in 10 countries competed for those spots. They selected 10 companies, and my company was one of them.”

“One of my engineers was the former co-founder of the App Store, lead engineer for Inmobi and has built for companies like Samsung, Comcast and LegalZoom,” she said. “My other engineer was lead engineer for Webroot. They both have 10 to 12 years of software development and startup experience in Silicon Valley.”

Don’t Get Mad, Get Paid is being designed with three levels of membership. Currently the only option is the Athena Gold level, which provides an array of support such as a library of necessary documents, document prep guidance, skip tracing to locate the other parent and more. Membership at this level is a $1,200 flat fee, or $100 per month, with a 100% satisfaction guarantee.

Additional membership levels, Athena Silver, for $20 per month, and Athena Titanium, for $999 per month, are still in the works, but will offer differing menus of resources for each client’s varying needs.

“Athena Silver is currently in development to meet the needs of parents that may not need the full Athena platform,” said Spence. “It is projected to launch this summer. Production of Athena Titanium will begin after that.”

Spence said her client base is mostly women and spans across all 50 states. “They fall into every socio-economic bracket — from wealthy to middle-class and lowerincome,” she said. “Though many people don’t like to admit it, we all know somebody who has had a problem collecting back child support. If you don’t think so, start shaking your family and friend trees and see who falls out.”

Athena’s technology works best by taking the guesswork out of the process for parents who are trying to locate and collect child support.

“We have what we believe is the fastest collection process in the country and can get our customers through the entire process within months,” she said. “We find the payor and their assets, transfer any paperwork to another state, if necessary, place liens and guide our client through the collection of their money within that time.”

With the launch of her company, Spence is hopeful that her years of work will continue to help parents even beyond her time as CEO and reach beyond what she had been capable of doing by herself as a consultant.

“A few years ago, I realized that this work that I have been doing is much bigger than me and much bigger than the 10,000 moms that I have helped over the years,” she said. “There are millions of women who need this help. So, realizing this need and being able to build something to address it is a good feeling,” she said. “I chose the name Athena for our product because Athena is the Greek goddess of wisdom, war, law and justice. Our product democratizes the child support collection process for back child support and enables women to access an otherwise very inaccessible system.” 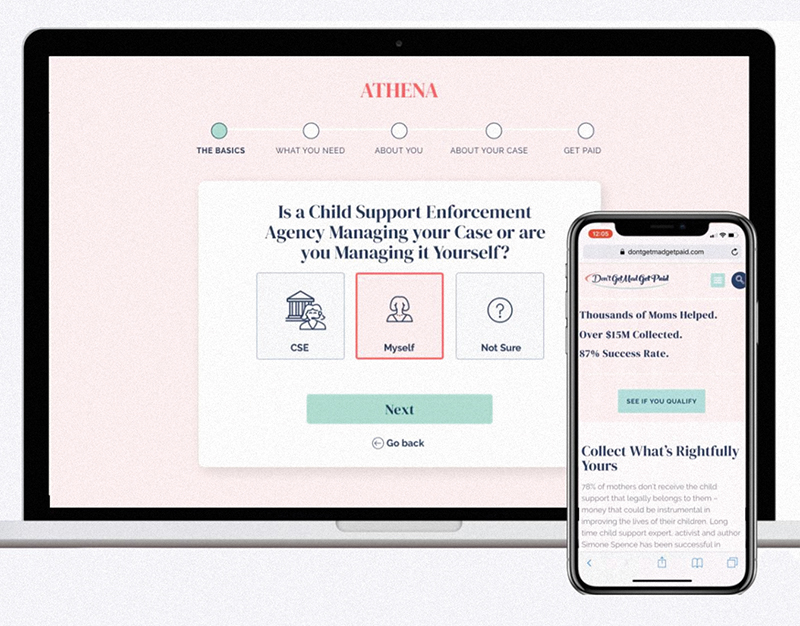 “We have what we believe is the fastest collection process in the country and can get our customers through the entire process within months,” said Simone Spence about her proprietary technology platform she named Athena.