Don’t Call It a Food Court

In October 2014, young visionaries Will Donaldson and Barre Tanguis were experiencing an early flush of success with their co-working space concept Launch Pad. When they learned that the lease on the refurbished St. Roch market was available, the two saw the concept of opening a food hall as “merely another co-working-space, except with napkins.” They executed the concept barely six months later when St. Roch Market opened as New Orleans’ first food hall

Food halls differ from food courts by offering a carefully curated mix of small, specialty vendors, often located in historical or high-traffic locations. This global trend is widely considered to be the next restaurant/food retail evolution.

According to a study by Chicago-based commercial real estate firm Cushman and Wakefield, the market has grown across the United States from 70 food halls in 2015, to an expected 300 before 2020.

St. Roch — More Than a Market
From the start, St. Roch’s primary mission was “to give customers real food, from a real chef, with a real story.” But to Donaldson and Tanguis, the vendor’s success is paramount as most have never operated a full-time food business before. The hands-on assistance St. Roch vendors receive includes payroll and accounting, graphic design and even sign-board writing. Once a vendor is ready to open, the St. Roch team helps create HR handbooks while training employees in skills such as customer service and accounting. Over time, the team has developed proprietary software currently being utilized by other startups.

Ambitiously, Donaldson and Tanguis debuted two new food halls in early 2018; the Auction House Market on Magazine Street and a second St. Roch Market in Miami’s Design District. Both new locations follow the original Saint Roch’s successful model of 11 food vendors and a full-service bar. With their operation expanding across the country, the company recently rebranded. Inspired by the word politan — meaning “of the people,” Chicago is now home to their fourth food hall, the first Politan Row, with another in the works for Houston.

Built in 1908 for a black fraternal organization called the Grand Lodge Colored Knights of Pythias, the Pythian Temple was home to a number of black-owned businesses, unions and the NAACP but had sat empty on Loyola Avenue for years.

In its new incarnation, the Pythian includes six floors of apartment dwellings, along with medical and office space, guaranteeing a hungry audience for the building’s ground-floor food hall. Bradshaw sees Pythian’s Food Hall as much more than a place to fill bellies. He sees it as an antidote to the deeper problems of today’s society, such as depression and loneliness often caused by technological social isolation. Bradshaw envisions the Pythian Market as a “living room for the city of New Orleans, where different groups of diverse people can come together in a comfortable setting and try foods both familiar and exotic.”

Without any food experience himself, Bradshaw reached out to culinary professionals and food hall veterans Lisa Brefere and Brad Barnes, consultants who previously curated the selection of multiple vendors in original locations such as the Barclays Center in Brooklyn, New York, and the Oracle Arena in Oakland, California.

Brefere and Barnes were so excited at the concept of a “Food Hall For All” situated in a historic building in one of America’s greatest food cities, that they became principals in the endeavor. While providing opportunities for vendors, the Pythian’s focus is on the intersection of retail and social event space, ranging from an intimate performance venue to full-blown food hall.

The airy, open layout provides a perfect setting for regular events hosted there, including jazz on weekends, trivia night and drag queen brunches — all free of charge. The performance space on the mezzanine is frequently used for free yoga classes while Tuesday’s from 3 to 9 p.m. are “Scrubs Nights,” designed to draw the medical crowd from the surrounding district.

All three of New Orleans’ food halls are bustling, with a reported minimum of 1,000 people per day frequenting each. 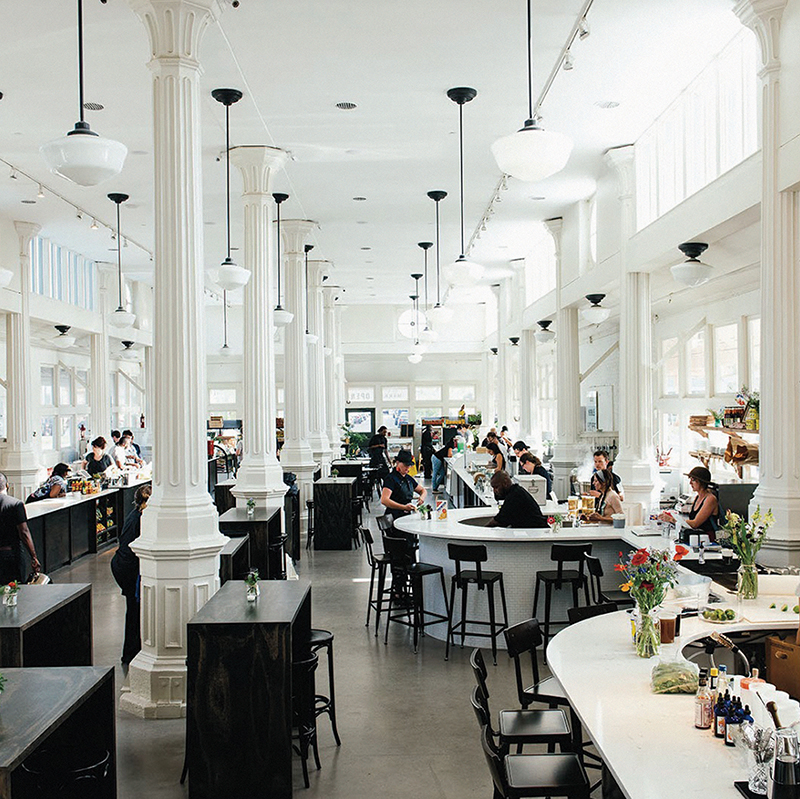