Executive Director Marci Schramm provides a peek into the “organized insanity” behind the largest free music festival in the South.

Created in 1984 as a way to bring residents back to the French Quarter following the World’s Fair, the French Quarter Festival (FQF) has grown from a free neighborhood shindig to the largest showcase of Louisiana music on the planet.

In early March, FQFI Executive Director Marci Schramm took a breather from her busy schedule to give Biz New Orleans an inside look at one of the Crescent City’s favorite events, held this year April 9-12.

Biz New Orleans: What’s the story behind the founding of FQF?

Marci Schramm: FQF was founded in 1984, when Mayor [Ernest] “Dutch” Morial was responding to the business owners in the French Quarter who were complaining heavily that the street and sidewalk repairs for the World’s Fair were killing their business. The streets and sidewalks were so torn up that people couldn’t get to the businesses and they were suffering.
So the mayor said, “Let’s throw a party and get the locals back to the French Quarter.” So that was the first year of French Quarter Festival. It was only meant to be a one-year event, but it was so well-received that now we’re in our 32nd year. 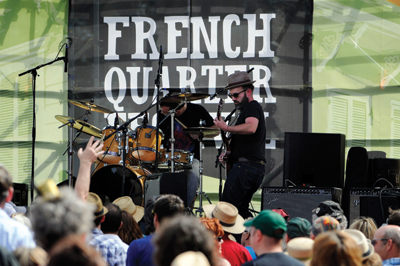 What they’re not paying at the gate with a ticket price, they’re spending in the restaurants, the bars, the gift shops, the antique shops and the hotels, and so there’s just this massive impact.”

Biz: How do you think FQF organizers first hoped the festival would impact local businesses?

MS: One of the driving goals was that it would have a significant economic impact on the neighborhood, and it certainly has. We hear all the time from our neighbors throughout the French Quarter that it is the best weekend of the year for them.

When you put on an event like ours, which is such a large-scale event that’s free and open to the public, people don’t just come, they spend a lot of money. What they’re not paying at the gate with a ticket price, they’re spending in the restaurants, the bars, the gift shops, the antique shops and the hotels, and so there’s just this massive impact.
In recent years, maybe the last four or five years, we’ve ranked only behind Mardi Gras for the largest economic impact to the city – $251 million last year for just FQF. 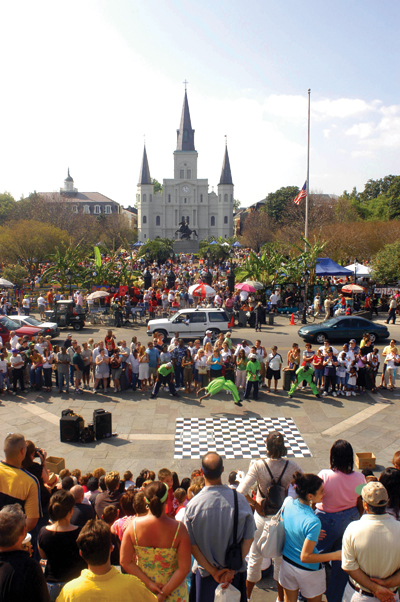 MS: Yeah. I think the difference is they’re in somewhat of a gated community. They’re at the Fairgrounds – fenced in. People buy a ticket, they go in, and they spend their day doing Jazz Fest. They’re staying within the food booths, and the merchandise tents. It’s not a neighborhood. The commerce is staying all in one place as opposed to spreading out.

The fact that we’re producing this massive event in this neighborhood, it just impacts every business. With FQF, people are running the streets all day and all night doing things, which is a different scenario. We don’t go around saying FQF is better; we’re just different. 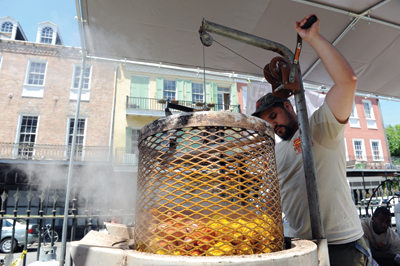 Biz: What kinds of planning goes into making sure that FQF is successful?

MS: One of the really special things about FQF is that while so many festivals happen out in a big field – whether that’s Marconi Meadows, or the Fairgrounds, or places like that – we are working in a living, breathing neighborhood. It’s not easy.

It’s really hard to do what we do because the logistics are so crazy. There’s traffic. There’s people who live here. There’s access issues. So we have to go to extraordinary measures to make it safe, make it legal, be cognizant of the neighbors and the neighborhood, and make sure they can still live and function.

“The hardest thing about producing a free festival is paying for it…Our sponsors are our lifeline,” Schramm says.

Biz: What kind of impact does FQF have on restaurants?

MS: They kind of brag and complain at the same time that it’s so much business, it’s really hard to handle. We were just sitting down with a food vendor last week who told us that last year he made around $80,000, which is significant for a $4 or $6 portion of food. That’s a lot of money in four days’ time. 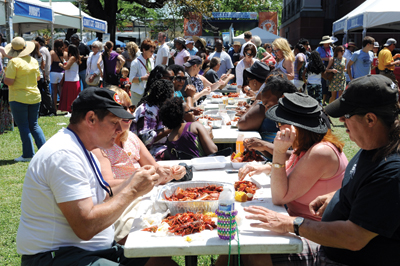 Biz: Who are some of the biggest sponsors this year, and what do they contribute?

MS: The hardest thing about producing a free festival is paying for it. It is so expensive to produce this festival, and we have zero dollars coming in at the gate. Our sponsors are our lifeline. They allow us to do what we do. The reason FQF has grown so much is really due to three companies: Chevron, Capital One Bank and Abita Brewing Co. 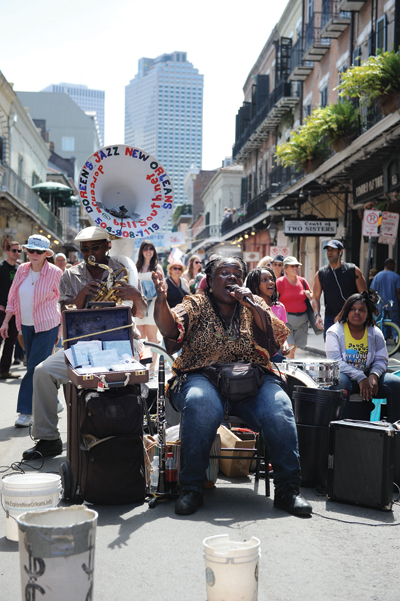 Biz: What kinds of activities happen in your offices in the weeks leading up to the event?

MS: We’re really busy year-round, but we start working on FQF in September, and then in January it gets really busy, and then once Mardi Gras is over, it’s like all hell has broken loose. All of us have been working seven days a week since January, and there’s always too much to do and not enough time to do it. It’s organized insanity.

Sponsorships are all being finalized right now. We’re getting the official schedule in place, not only the printed piece, but the iPhone and Android app. And then there’s the music schedule. We’re finishing the musician contracting right now. The marketing and PR is going full-force. The merchandise has started coming in, including pallets of poster tubes. We’ve got artists in here signing and numbering posters.

Since Mardi Gras, we’ve had big sit-down meetings with the police department and fire department. Today we were at City Hall. We do a big presentation for department heads from all the major city agencies that are impacted by the event. We meet with EMS, Tulane nurses who run our first-aid booths. We have our volunteer program with over 2,000 volunteers, so there’s lots of recruiting going on right now with volunteers and getting ready for volunteer orientations.

It’s a lot. People have no idea how much works goes into a festival [laughs]. We all love it, but it’s really intense. As a nonprofit too, we’re not rich, so we have to be really thrifty, and we count on lots of people to help us and do us favors and lots of in-kind support. 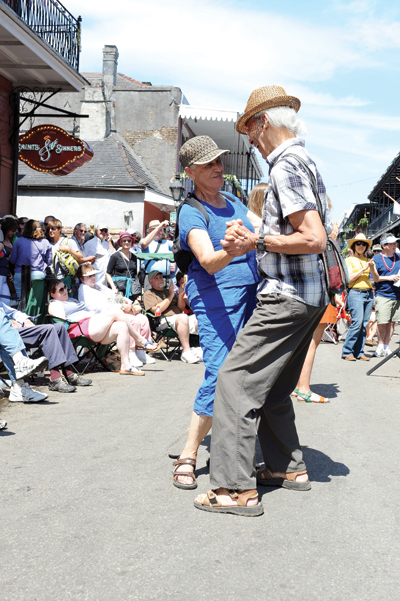 Biz: What do you think is the biggest appeal for attendees? What keeps them coming back in record numbers each year?

MS: It’s three things. First, the musical showcase is unbelievable. There’s no other way to get exposed to this much amazing local music.

The second thing is the food. People argue all the time about what’s better, the food or the music. The restaurants never cease to outdo themselves. A lot of times its the owner of the restaurant that’s serving you. It’s just part of that thing that makes New Orleans so special. 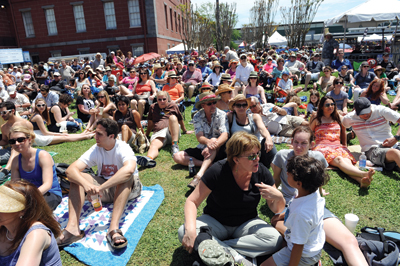 Last year’s attendance numbers reached over 732,000 for the free event.

Biz: What is your favorite and/or most rewarding part of putting on FQF?

MS: Every single year, it’s morning time, we’re opening the festival, it’s really stressful. Everything’s going wrong, all the electricity’s blowing or some crazy thing like that, and people will be constantly stopping me on the golf cart to tell me how much they love the festival and say thank you. And that, every single year, makes me stop in my tracks and go, “Ok, we’re gonna get through it. It’s gonna be great. Smile.” [laughs] There’s this outpouring of love for the festival, which I will never, ever take for granted. 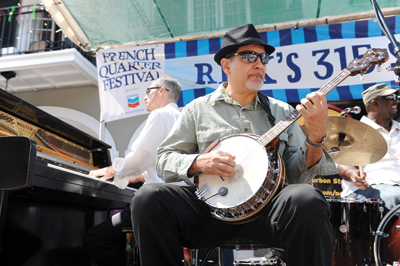 FQF By the Numbers

23
Stages showcasing every genre of music