In an era where business communication is predominantly done online, there is one notable exception: the office greeting card. No matter what the occasion — a birthday, a new baby, a promotion, a wedding, or a loss in the family — the same thing has been happening in offices around the world for decades: a card is passed around the office and everyone takes turn signing it and passing it around.

For Michigan native turned New Orleanian, Aaron Rubens, it was obvious that this old school method left a lot of room for improvement. Thus was the impetus for Rubens’ creation — Kudoboard: an online greeting card replacement that allows users to upload messages, photos and videos as a group to deliver to an individual.

“Users simply select a recipient, upload their content to his or her Kudoboard, invite others to contribute, and then deliver it online,” explains Rubens, who adds that the completed online board can then be printed to provide a physical copy to a recipient that might not be as tech savvy or who would just appreciate having a hard copy as a keepsake.

In addition to saving businesses the cost of buying cards (the service is free), Kudoboard allows employees to express their well wishes in a wider variety of creative and meaningful ways, far beyond just signing their name.

Created in mid August 2015, Kudoboard has attracted over 1,000 registered consumer users, all who have created or modified boards so far. Rubens says response from consumers has been encouraging, and users have been enthusiastic about their experience.

Business experts are also seeing the appeal. Kudoboard was recently chosen out of nearly 30 applicants to be one of five companies to compete in the fourth annual JEDCO challenge. The Jefferson Parish-based pitch competition is put on by the Jefferson Parish Economic Development Commission (JEDCO) together with First NBC Bank, and will take place March 14 during New Orleans Entrepreneur Week.

“We’re thrilled at the opportunity to present Kudoboard to a large group of folks from around the country, and we’ve truly appreciated JEDCO’s support leading up to the pitch,” says Rubens.

Rubens is committed to keeping Kudoboard free for consumers, which means the challenge has been figuring out how to make the company profitable.

“Kudoboard has two business lines, the consumer side and the B2B (business-to-business) side,” Rubens says. “On the consumer side, Kudoboard is free to use and includes a variety of premium options for users to upgrade, like printing the board.

“On the B2B side, we offer custom, branded versions of the Kudoboard platform to various institutions,” he explains. “Hospitals can enable family members and friends to create and print Kudoboards for patients. Businesses can show appreciation to their workforce by automatically creating five-year, 10-year or 20-year work-anniversary Kudoboards with digital messages from an employee’s coworkers. 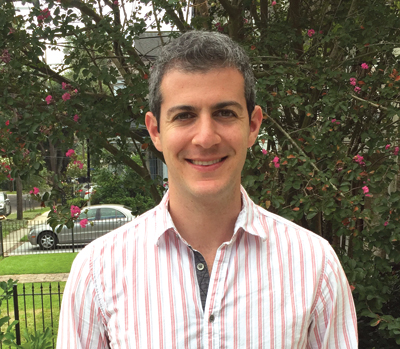 “Users simply select a recipient, upload their content to his or her Kudoboard, invite others to contribute, and then deliver it online.” -Aaron Rubens

“We are even in conversation with a few funeral-service providers to integrate Kudoboard’s technology into their websites to allow family members of the recently deceased to create a Tribute Board for their loved one, not to be called Kudoboard, of course,” he adds.

Rubens’ team launched the business-to-business side of Kudoboard in January, and says they are currently working on several pilot projects that they look forward to announcing soon.

The idea for Kudoboard actually started during Rubens’ previous life as a teacher.

“I taught an intensive math class where the students got to know each other well,” says Rubens. “At the end of each school year, I’d ask them to each take a piece of paper, write their name in the center, and pass it around to the other students in the class. Each student would write a compliment or “kudo” on the other students’ papers, and then the papers would be returned to their owners.”

Though students were initially skeptical of the concept, several came up to Rubens afterwards and again during subsequent school years to tell him on how meaningful the compliments were to them, and how it boosted their confidence or morale.

“This convinced me of the power of group appreciation,” Rubens says. “But it wasn’t until a few years later that the idea of turning it into a technology company began to form.”

Rubens and his wife, Sonia, whom he met while they were students at Tulane University, had always loved New Orleans, but they left the Crescent City and headed to Cambridge, Massachusetts where Rubens earned his MBA from Harvard.

With all his friends from college spread out across the country, they struggled to find ways to keep in touch as a group. When a friend’s 30th birthday began to approach, there was talk about putting together a series of video messages to celebrate. This exercise proved to be challenging and Rubens started to think about how one could simplify the gesture.

“It ended up being an ordeal where we each had to upload the video to YouTube, create a basic website to embed the videos, and so on,” says Rubens. “I put this concept together with the previous ‘paper Kudoboard’ experience from the classroom, and it convinced me to create Kudoboard as online service, where folks could upload messages, photos, and videos as a group to deliver to an individual.”

After eight years away, Sonia received an offer for a tenure-track faculty position at UNO and the couple jumped at the chance to move back, bringing Kudoboard with them.

In this social media frenzied age, why would users gravitate toward Kudoboard, over say, a congratulatory or supportive Facebook post or email?

“The messages that folks write on a Kudoboard are far more in-depth than what you’d typically see on a Facebook post, and as a result, our most common creators of boards are those who were initially introduced to the service when they received one themselves,” Rubens says.

While Kudoboards tend to evoke strong emotional responses from recipients, it can be tough to communicate that value to someone who has not yet received a board. Rubens and his team are working to change this.

“We are working on a video where a variety of different Kudoboard recipients talk about their experience receiving a board,” Rubens says. “It’s not as good as getting one yourself, but it definitely speaks to the emotional appeal.” 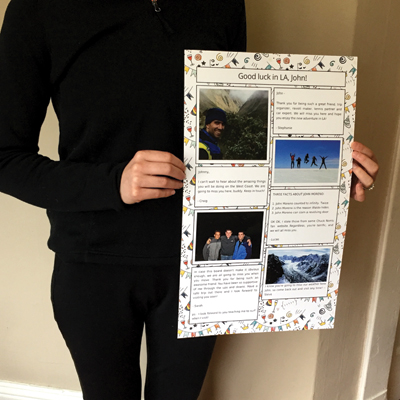 On the consumer side, Rubens says there is a natural viral mechanism to Kudoboard that is helping get the word out.

“When someone creates a Kudoboard for a friend’s birthday, they invite maybe 20 other people who are then exposed to the service for the first time,” he says. “Kudoboards on the consumer side are free to use, and again, allow for premium upgrades, so the adoption barrier is quite low.”

When selling the custom-branded versions of the Kudoboard platform to businesses, Rubens’ team works to set up a product demo to show consumers how user-friendly Kudoboard really is, and give them a taste of what it would be like to be on the receiving end of one.

“The nice thing is that we can direct them to the consumer side of Kudoboard,” says Rubens. “And have them create a board for a friend or family member to really understand how it works.”

The most common reason people are making Kudoboards so far is for birthdays; about half of boards are used to celebrate them. The remaining half covers a variety of other uses such as, good-luck, get-well, or wedding or baby congratulations messages.

“The great thing about Kudoboard is that it’s a very broadly applicable product,” Rubens says. “We’ve had many people find us through a Google search and create Kudoboards from countries around the world.”

So far, Kudoboards have been created from Costa Rica, Germany, France, Australia, Jordan and Romania.

With its universal appeal, Kudoboard is a product likely to be appreciated by people of all walks of life, but the biggest focus for the Kudoboard team at present is growing the B2B side of their business — specifically, selling the customized branded versions of the Kudoboard platform to businesses, hospitals and other places of interest.

When all is said and done, Rubens is confident that the emotional appeal of Kudoboard is what will make it profitable and marketable.

“The most powerful advocates we have are those who receive them,” Rubens says. “When we launched the printing feature on Kudoboard, we expected board creators to be the ones to use it most frequently. In fact, the majority of printed boards are sold to board recipients, which to us is a great sign that people really value receiving the product.”