METAIRIE – Clearview City Center and Audubon, owners and operators of multifamily properties, have announced that The Metro at Clearview – an “upscale, five-story apartment community” – will be constructed as part of the shopping center’s mixed use re-development. The project will include 270 units at an average size of 925 square feet. Lease prices will range from $1,500 to $3,000 per month. The estimated total construction cost is $55 million.

“Clearview City Center is rapidly becoming one of the most exciting live-work-play developments in the southern U.S., with destination health care, retail, outdoor green space and now what will become one of the most sought-after luxury apartment communities in greater New Orleans,” said Thomas Richards, Clearview City Center managing partner in a release. “Audubon is a first-class developer with a vision that very much aligns with our approach to transform our footprint at Clearview into a destination for the next-generation, live-work-play consumer.” 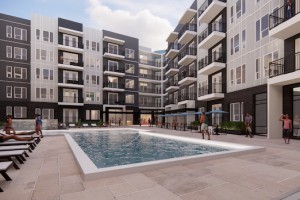 Audubon, an Atlanta-based firm that purchased the American Can Apartment Complex in Mid-City from HRI Properties in 2013, expects to begin construction May 1 and complete the development in two years. Planned features include two courtyards, a resort-style pool, cabanas, a yoga lawn, grilling stations and a Zen garden. Other amenities in the design include a 2,000-square-foot clubroom with multiple seating and entertainment areas, a catering kitchen, a fully furnished fitness center and a lounge on the fifth floor that will overlook Clearview City Center.

“We are excited to join Clearview City Center and be part of the amazing transformation already underway at this site,” said Andrew Schwarz, Audubon founder and CEO in a release. “When we began looking around the country for our next property, we sought out a destination that allowed us to fully reimagine the possibilities for a unique, modern residential development. Clearview City Center hits on all these criteria and more, with a concept tailor-made for our project and the significant investment we are now making at this site.”

Other tenants at the Clearview City Center redevelopment include an Ochsner Health “super clinic” and a Regions Bank location.

In December 2019, the Clearview owners unveiled plans to reimagine the former Clearview Mall site, which has been locally owned and operated since 1968, into a “dynamic and adaptive” mixed-use development with upscale residential, retail and commercial office space. Clearview City Center’s first phase of construction began in September 2020.