Local professionals battle with a new reality while remaining hopeful 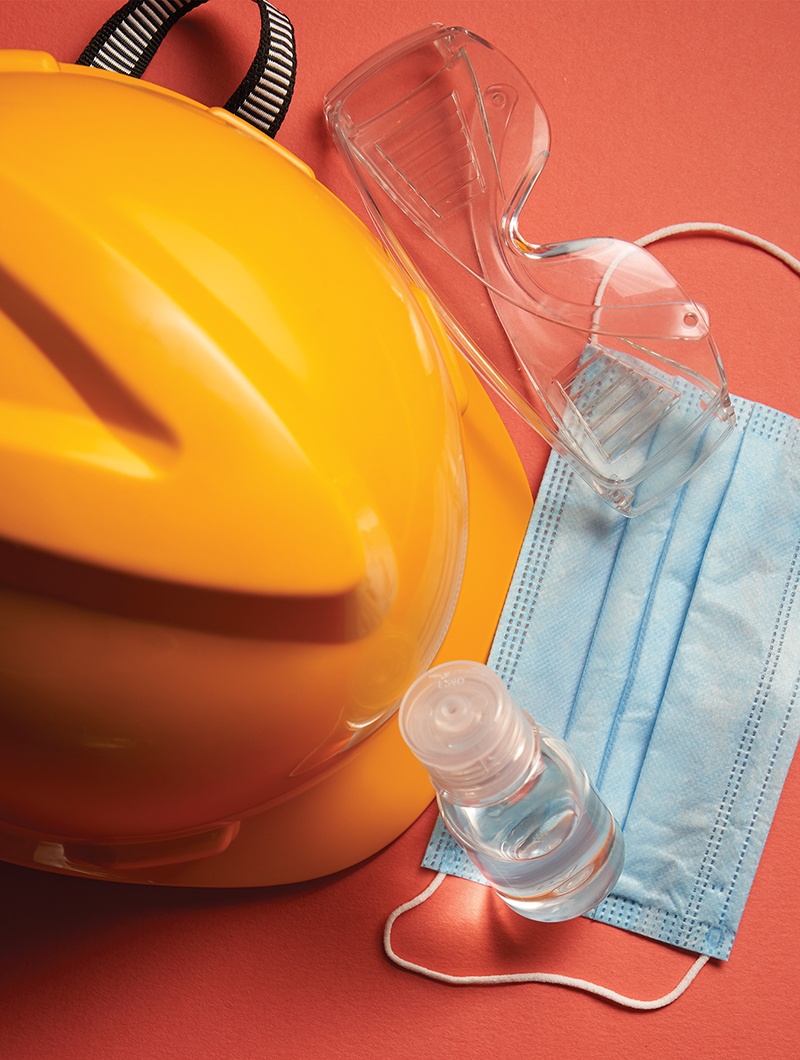 COVID-19 will hopefully be under control with effective treatments and vaccines sooner rather than later, but it will have long-lasting operational changes that we must be diligent about and monitor going forward. – Ryan Gootee, president and CEO of Ryan Gootee General Contractors

When the shutdown was implemented, many businesses reduced to skeleton crews in order to reduce social contact, but with the move to Phase 2 guidelines, commercial construction is among those industries that have ramped back up while enacting safety protocols.

“We require masks except when people are in their own offices by themselves,” said Robert Wolfe, president and CEO at Robert Wolfe Construction, a commercial and residential construction company headquartered in Gretna. “The field practices the social distancing rules and we have been sending out information to educate our suppliers and subcontractors.”

Some of the steps Wolfe has taken include changing schedules on jobs to ensure proper social distancing between crews and delaying crews around projects where there’s a high-risk population occupying space.

Ryan Gootee, president and CEO of Ryan Gootee General Contractors, whose recent and current projects include The Sazerac House and the new headquarters of Fidelity Bank, said the firm has adopted similar new protocols and safety procedures based on guidelines issued by the CDC:

“Safety is a part of our culture and this just created another layer,” he said. “In the office, we have implemented a rotation schedule to reduce the daily headcount and have allowed people to work from home whenever they want.”

Still, the commercial construction sector has experienced many project delays and obstacles to obtaining materials, permits and inspections. Material scheduling — especially items manufactured outside of the state or country — and labor force scheduling are some of the major issues Wolfe said his team is currently dealing with.

Commercial construction, Gootee explained, is tied to a wide variety of other industries.

“Locally, the double hit to oil and gas, along with tourism, is obviously the biggest concern,” he said. “Oil and gas are trickle-down economic drivers for us, but tourism is a direct link since hospitality is a large part of our portfolio.”

Gootee said he has at least four projects on hold but is optimistic they will get back on track.

Bryan Hodnett, partner and vice president of business development at DonahueFavret Contractors — a commercial general contractor headquartered in Mandeville — said his company has also been experiencing slowdowns on projects in sectors like hospitality, retail and multifamily, but medical and institutional projects have remained strong throughout the pandemic. He noted that second-quarter business was down but is now beginning to pick back up again.

“In March, April and May, we saw a notable drop in the number of RFPs (request for proposals) advertised,” said Combs. “June has been an improvement, and it looks like things may be improving in July, as well.”

The future of RFPs, however, like the economy as a whole, remains uncertain.

“We are seeing signs of increased competition and contractors taking on more risk to build up their backlog since no one truly knows what lies ahead and how long that uncertainty will last,” Gootee said. “The saying ‘Time will tell’ aptly applies to construction. We are a lagging industry. What happens today typically doesn’t present itself for several months down the road. Q3 and Q4 of 2020 will be interesting, to say the least.”

A new nationwide surge in reported cases of Covid-19 cases as of mid-July has not helped.

“As the second wave of COVID makes it through the country right now, there will be more uncertainty,” Hodnett said. “This will be challenging for the New Orleans economy because of the heavy reliance on tourism and hospitality.”

“COVID-19 will hopefully be under control with effective treatments and vaccines sooner rather than later, but it will have long-lasting operational changes that we must be diligent about and monitor going forward,” Gootee added.

“Estimates are anywhere from two to four years for the industry to rebound,” Hodnett said. “This will have a huge ripple effect on the ancillary businesses supporting and feeding off of the hospitality sector, as well as the availability of capital. We are hearing about banks tightening up on lending requirements, which will make the economic recovery rebound that much harder.”

Hodnett added that despite the tough times he feels confident that activity will be strong by the end of the year, noting, “There is a significant amount of money on the sidelines waiting for the smoke to clear.”

For now, many companies still remain busy, and hopeful.

“We were fortunate to pick up two large projects during the COVID quarantine,” said Hodnett. “One was a large buildout for a medical client, which we completed in only a few weeks. Another is a historic renovation of a school building that we are just about to break ground on.”

“Because of our diverse nature (real estate brokerage, development work, and our commercial, residential and elevation divisions in construction) we always have projects in our pipeline,” said Wolfe.

“Since the start of the pandemic, we’ve started four projects and have three more that will kick off within the next month,” he said. “There are other projects that we are actively working on that won’t start until 2021, which is promising.”

Estimates are anywhere from two to four years for the industry to rebound. This will have a huge ripple effect on the ancillary businesses supporting and feeding off of the hospitality sector, as well as the availability of capital.  – Bryan Hodnett, partner and vice president of business development at DonahueFavret Contractors