Studio Arabi and the Arlene and Joseph Meraux Charitable Foundation create an art community and destination in St. Bernard Parish.

The loud and distinct bang, bang, bang of a nail being hammered into wood cuts through morning silence in the hallways at Studio Arabi.

The sound is coming from woodworker Kiff Magor’s studio. Magor is out of the studio, but Julian Wellisz is pounding away, assisting with a job creating tables for a restaurant.

Magor’s studio is one of 10 currently rented in the 9,000-square-foot, 13-studio space. It’s housed in a circa-1970s Western Auto Supply Company, which was later taken over by Fastenal. Most recently it, along with several other buildings on St. Claude Avenue, have sat vacant or were not being used to their greatest potential given the vast square footage.

Opened in May 2016, the owners of Studio Arabi aim to change that as part of a two-block stretch of St. Claude Avenue in St. Bernard being developed via a partnership. Artists Erica Larkin Gaudet and Mitchell Gaudet are working with the Arlene and Joseph Meraux Charitable Foundation to bring their vision to fruition.

“The little studios are where cars typically pulled in,” says Mitchell Gaudet. Clad in tan overalls and a faded red T-shirt, he has just walked over from his space at Studio Inferno. Two doors down from Studio Arabi, it is housed in the former Arabi Theatre. The circa-1940s theater now serves as a glass studio, gallery and workshop for Gaudet and includes three other artist spaces. 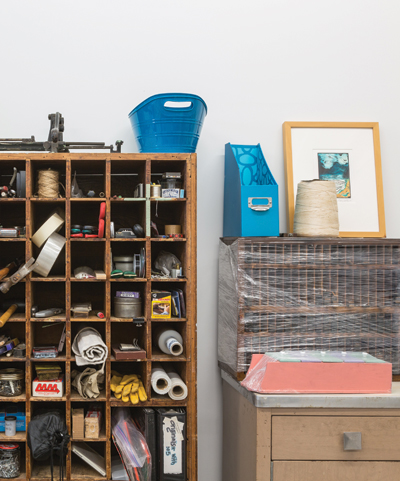 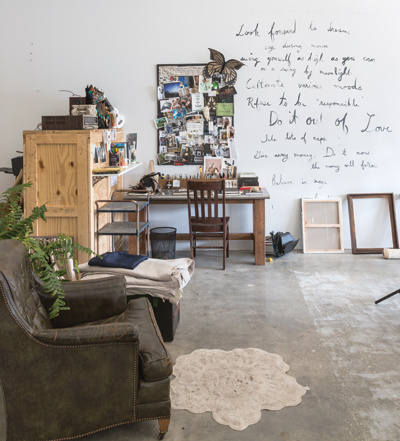 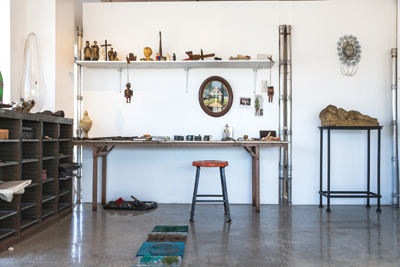 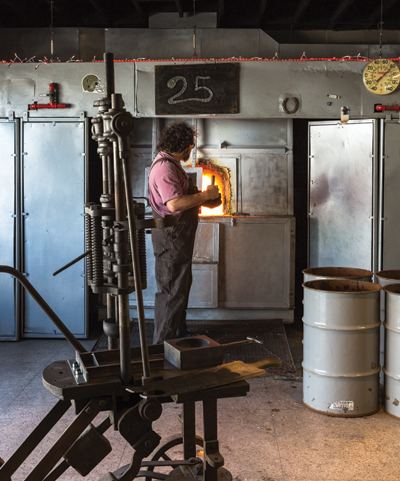 TOP LEFT Printmaker Amy Newell’s space is one of 10 rented out in Studio Arabi — a 9,000-square-foot, 13-studio space in a circa-1970s building. Formerly a Western Auto Supply Company, it was later taken over by Fastenal. TOP RIGHT Painter Rebecca Rebouche has the space next to Larkin Gaudet’s metal shop. Light and airy, it provides an ideal environment to create her whimsical, yet mysterious works. A distressed leather club chair and piano provide homey touches and places to take a break. BOTTOM LEFT A detail of Mitchell Gaudet’s workshop provides a glimpse into the objects and ephemera that inspire his work. BOTTOM RIGHT Glass artist Mitchell Gaudet pulls 2,000-degree glass from the oven at his studio, workshop and gallery, Studio Inferno. Located two doors down from Studio Arabi, it is housed in the circa-1940s Arabi Theatre.

Between the two spaces is the Valiant Theatre and Lounge, which stages live performances including musicals, plays and cabaret. The bar is open to everyone, not just performance-goers.

Larkin Gaudet and Gaudet are both familiar with starting and running studios, having done so in Bayou St. John and the Bywater, respectively. In fact, both were pioneers in the areas where they began their studios decades ago, drawing with them like-minded creatives who helped make those neighborhoods the prime real estate they are today. Despite that, at first Gaudet wasn’t so sure about Arabi as the next frontier.

“I grew up in the 9th Ward,” says Gaudet. “I never thought I’d pass 200 feet from the line. The light industrial spaces and the cool things happening here, that’s how you sell it. These younger people, the guy who owns the Arabi Foods Store, the 40 Arpent Brewery, are doing cool things. It’s an extremely welcoming community.”

Gaudet says it took time and patience to get the local government to designate the area as a cultural district, but once that was done they were off and running. The mix of artists drawn to the spaces runs the gamut from printmaker Amy Newell and fashion photographer Christopher Horne to former homicide detective Ed Dieringer, owner of Electric Ladyland Tattoo and woodworker, and painter Rebeca Rebouche. 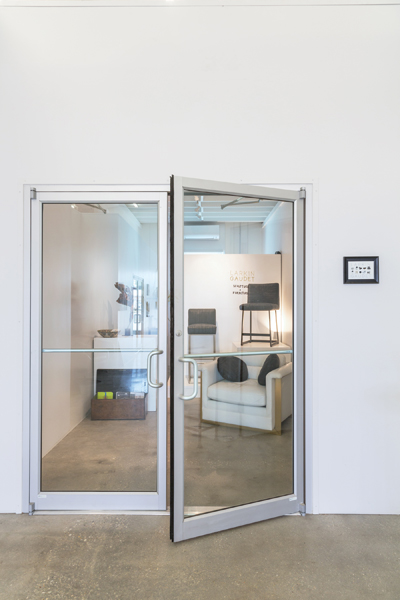 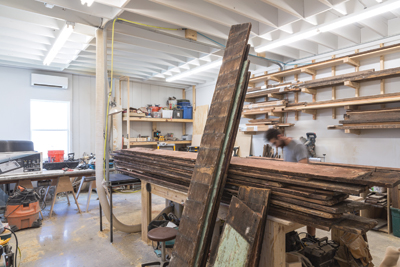 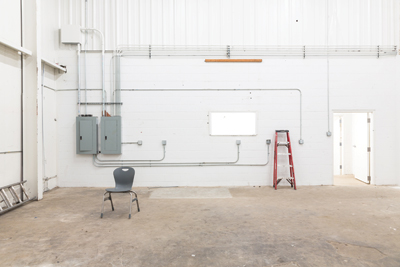 TOP LEFT The Larkin Gaudet showroom is connected to Erica Larkin Gaudet’s workshop. While not all of the studios have galleries and showrooms, spaces that have both are a signature of Studio Arabi. TOP RIGHT Julian Wellisz, who is assisting in woodworker Kiff Magor’s studio, removes nails from a piece of reclaimed wood. Magor is one of two woodworkers with studios at Studio Arabi. BOTTOM A now-vacant studio is being prepared for its new occupant, a photographer.

Shifting at a moment’s notice between their respective roles as developers, landlords and artists is of course a challenge, but Larkin Gaudet and Gaudet are committed to seeing through their vision of a community serving artists at every stage of their careers while, as part of the partnership with the Meraux Foundation, also bringing something culturally enriching to St. Bernard Parish.

The day-to-day, or sometimes hour-to-hour, transition from landlord to artist is made easier now that Larkin Gaudet’s metal art shop and furniture design studio are in the Studio Arabi space.

“When I was working in my own building down the street, it did get a little lonely,” says Larkin Gaudet. “You really are half [of the] time dealing with rental issues. It’s hard when you do what I do — when you start working on something — to stop. But, you also get the community and that’s the good part.”