NEW ORLEANS — Barrie Schwartz had only been living in New Orleans for about year, when a dinner party she hosted in her home spawned a full-fledged culinary production company that showcases the talents of local chefs.

The Michigan native moved to New Orleans in 2011. While waitressing at Coquette on Magazine Street, she became good friends with chef Nini Nguyen, who wanted to create a family-style dinner inspired by her Vietnamese heritage.

Schwartz hosted, promoted and sold tickets for the event.

“We ended up selling out and having around 70 people at my house,” said Schwartz. “Nini said to me, ‘You should start doing this with different chefs and call it My House.’”

Sure enough, Schwartz established My House Social in 2012 and began hosting pop-up dinners that featured local chefs. The company quickly gained a cult following. Over the past few years, it has grown to five staff members, secured partnerships with major brands, and hosted events around the country.

On October 1, the business will be rebranded as My House Events.

By collaborating with a network of chefs, My House Social currently customizes menus for brides, event planners, and various venues around town, while simultaneously creating economic opportunities for professionals within the hospitality industry.

The concept, however, has evolved over time.

In 2012, inspired by the food truck movement happening in Portland, Oregon, Schwartz came up with the idea of creating a food truck lot in New Orleans and hosting festivals in partnership with nonprofits and community organizations throughout the city.

“It was awesome, but if it rained, the chefs would do poorly, and it wasn’t worth their time if people didn’t come,” she said. “It was really hit or miss.”

Schwartz realized how much she “cared about making sure the chefs were happy, and that there were economic development opportunities for them, through the work,” so she began focusing on catering opportunities and private events.

She achieved a breakthrough moment in 2013, when Microsoft hosted a conference at Woldenberg Park and asked My House Social to send out food trucks for hungry patrons. That same year, Schwartz met her business partner, Danielle Lee, who began developing the wedding side of the business.

Since then, My House Social has worked to establish strong relationships with local venues, and to connect with brands visiting the city.

“They reach out to us because, instead of being a caterer, we’re a network of chefs that customize menus for these brands,” said Schwartz, recalling how My House Social collaborated with The New York Times for a conference they hosted in partnership with the Contemporary Arts Center. 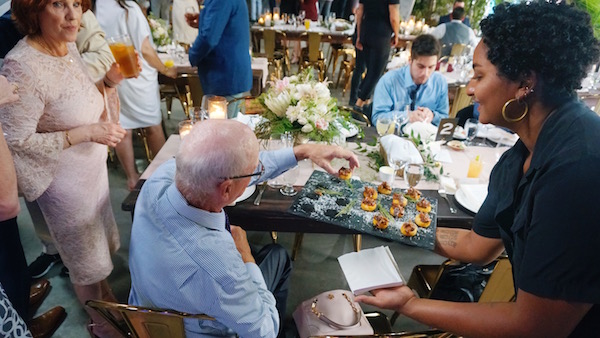 My House Social, which will soon become My House Events, is a culinary production company.

Aside from the typical hiccups that come with running a business, Schwartz said the main challenge for My House Social was becoming a part of the New Orleans community, and establishing relationships with popular event locales like Mardi Gras World, The Republic, and The Sugar Mill.

“When I first entered the industry, it was making sure that we could provide trust to people and build our reputation,” said Schwartz. “Because when we first had the idea, we didn’t have events to back it up.”

Since the name My House Social has been problematic at times, the company will become My House Events, said Schwartz.

“People have been thinking we may be a social media company, or they just call us My House,” said Schwartz. “We wanted to elevate our brand aesthetically to match what we are, which is sophisticated, customized, and playful.”

And, the company is bringing hospitality into the events community, she added.

Looking ahead, Schwartz hopes to grow My House Events’ presence in other food-loving cities, noting that they have hosted gatherings in Nashville, Chicago and San Francisco; and also deepen the company’s connection to New Orleans and its culinary heritage.

“Instead of doing one-off events, we can do a whole conference with people rotating chefs throughout the whole weekend,” she said. “We’ve helped raise over a million dollars in extra revenue for our database of chefs, and we want to be really intentional with promoting and working with the chef community.”

She believes the company has continued to achieve success because they’ve focused on a concept that’s unlike any other in the city.

“There are chefs that have catering companies, and there are event planners, but I haven’t seen anyone quite like us,” she said. “I think what really sets us apart is our unique customization and how much we really care about making sure the client is happy, but also making sure that the chef is doing what they do best, which is cooking a really awesome menu.”