Relocating from Mid-City to the Port of South Louisiana was an obvious choice for Baumer Foods, Inc., following Hurricane Katrina. 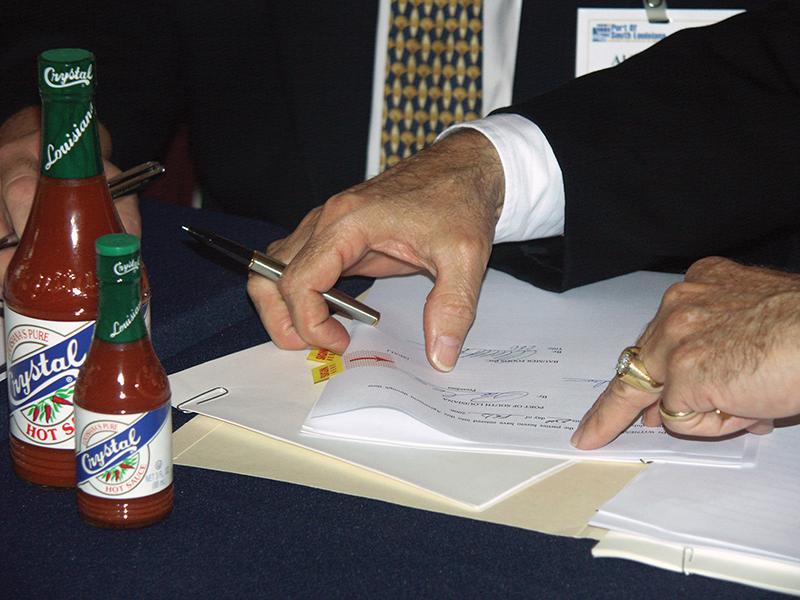 During Hurricane Katrina, when floodwaters inundated New Orleans, the Baumer Foods, Inc., headquarters in Mid-City suffered massive devastation. The company — known for its Crystal Pure Louisiana Hot Sauce — relocated its manufacturing facilities upriver to the Port of South Louisiana, which is located nine feet above sea level in Reserve. As it turns out, the move was beneficial for a number of reasons.

The story begins in 1923 when Alvin Baumer, Sr., borrowed money from his future father-in-law to purchase what was then known as Mills Fruit Products. Also included with the sale of this small sno-ball syrup company was the recipe for a hot sauce made with cayenne peppers. As word of the tangy and bright Crystal Pure Louisiana Hot Sauce spread, the company experienced incredible growth and changed its name to Baumer Foods, Inc., in the 1940s.

During this time, the company decided to move headquarters from Tchoupitoulas Street to a larger 120,000-square-foot plant (with 50,000 square feet for production) on Tulane Avenue in Mid-City. Baumer Foods, Inc., not only produced Crystal Hot Sauce here, but also made preserves and jellies that American soldiers enjoyed as part of troop-issued combat rations during World War II. It was also during this time that the building’s iconic neon sign became a New Orleans landmark. After the end of the war, the company began to market the hot sauce — as well as canned goods, olive oil, mustard, and other sauces and condiments — outside of the New Orleans Area.

Business continued to boom with all of the products being produced at this facility until August 2005 when Hurricane Katrina devastated the Crescent City. Along with the billions of gallons of water that flooded the city came the destruction of the Baumer Foods, Inc., building and that famous neon sign.

Baumer Foods, Inc., halted production and used contract packers to supply its needs until the company was able to resume business.

“We started production in the first quarter of 2007 at our new facility at the Port of South Louisiana in Reserve,” says Alvin Baumer, Jr., current CEO of Baumer Foods, Inc. “We were able to salvage and rebuild virtually all of our production equipment, and about 50 percent of our packing and raw material inventory was able to be used.” The company also had a replica of the neon sign made that now sits atop an apartment building located on the same site as the old factory in Mid-City.

The company chose to relocate to the Port of South Louisiana primarily because the existing facility was able to accommodate its needs.

“The fact that it was on higher ground and offered more space for storage, production and truck loading, also were key factors,” Baumer, Jr., says. “The location offered much easier access to I-10 for outbound and inbound freight.”

“If we were to incorporate additional shifts as sales increased, we could produce about 40 to 50 percent more than our current needs,” Baumer, Jr., says. “Our new location provides much more space than we had in New Orleans. We were able to lay out our production and processing areas in a much more efficient manner. We also have had a very harmonious relationship with the Port of South Louisiana. They have worked well with us in meeting our requirements. Just last year, we had an unannounced audit from the FDA where we had to make some improvements to our floors. Paul Aucoin, [executive director at the Port of South Louisiana], and the Port worked with us and helped us out in a big way. And Joey Oubre, Port Facility Maintenance Manager, is Johnny-on-the-spot to come to our aid when we have any issues whatsoever with the property.”

While Baumer Foods, Inc., stopped making jellies and preserves after Hurricane Katrina — sales were declining in the category and it didn’t make sense to relocate the production equipment — the family-owned company has become one of the fastest growing condiment manufacturers in the country. Baumer Foods, Inc., produces about 4.5 million gallons of Crystal Pure Louisiana Hot Sauce annually that is distributed throughout the United States and to more than 75 countries across the globe. The company also has branched out into other products, including Crystal Buffalo Wing, Worcestershire, Steak and Asian sauces, and Figaro Liquid Smoke.

“We produce about 860,000 cases of assorted Crystal and private label products annually,” Baumer, Jr., says. “We are projecting to export approximately 1 million cases of product through the Port of South Louisiana in 2020.”

From the port perspective, Baumer is not merely a welcome addition to the area because of increased business — Port Executive Director Paul Aucoin says they’re simply excited to work with a company that produces such an esteemed line of goods.

“We are pleased to have a company so well-known operating from our port,” Aucoin says. “They make excellent products.”