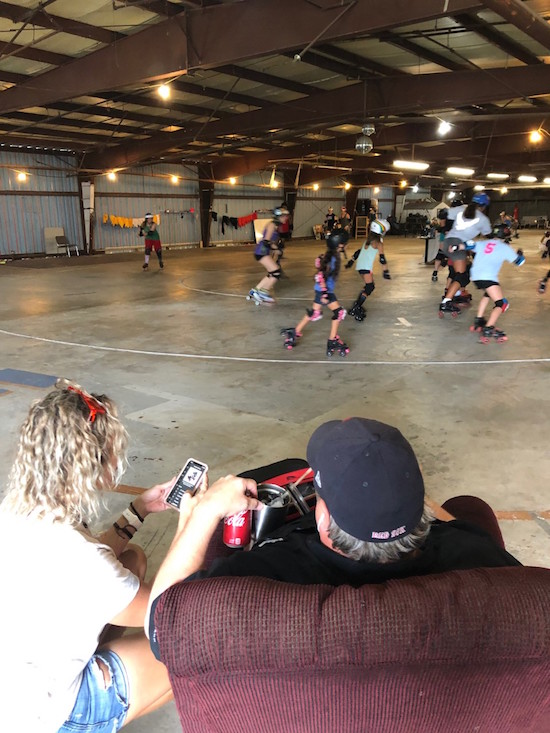 In the heart of a tough industrial part of town, on a scorching Sunday afternoon, parents sit in a dimly lit warehouse watching children repeatedly skate around an unpretentious roller-rink.

The young skaters are learning to hip whip, recycle, snowplow, t-stop and bridge. They are members of the Crescent City Crushers — the only junior roller derby team in New Orleans.

“We bring kids together to have fun,” says Charlotte Steele, one of the founding coaches of the team. “It’s also a way to promote social acceptance, fitness and competitive gameplay.”

“I used to be an ice skater in Michigan, but when I moved here in 2015, I discovered derby and it was exactly what I needed,” says Steele, a garden teacher with Edible Schoolyard New Orleans. “Derby is such an empowering sport.”

The Crescent City Crushers, a nonprofit, was started as an adjunct to the team two years ago and its membership is growing. They added 13 new skaters this year. The team now has 27 members, a diverse group consisting of boys and girls ages 6 to 17.

According to Amanda Moulton, whose 11-year-old daughter, Blonde Bomber (aka Evangelina), had tried other sports but the minute she strapped on a pair of skates, knew she’d found the sport for her.

“I was worried at first about injuries, but the coaches are so careful and the other skaters are so supportive,” says Moulton, who is also one of the organization’s board members. “They all practice how to fall safely, and they all wear protective gear. I still worry but I like seeing my daughter persevere.”

“It’s a sport they can do together,” she says. “I like that it makes them strong and that they’re learning to take care of themselves. It’s certainly building their confidence. They’re also becoming better friends.”

Ruby Bruiseday, aka Ruby Crawford, is a 12-year-old student at St Martin’s Episcopal School where she’s a cheerleader and active in the drama department. By far, however, her favorite extracurricular activity is roller derby.

“We do a lot of scrimmages,” she says. “It’s not an easy sport and you have to put in the practice but it’s so much fun.”

Crawford usually plays blocker, but she likes being the jammer too. According to Crawford, blockers can all play offense and defense and a jammer wears a helmet cover with a star on it. The jammer’s goal is to pass opposing blockers and break from the pack as quickly as possible to score.

If you think your child would like to join a practice to see if they might be interested, practices are held on Sundays.  It’s $10 to drop-in. Direct message the organization at www.bigeasyrollergirls.com/crescent-city-crushers for more information.

“This is a place where you can live out an alter ego and a place where everyone can belong,” says Steele. “We are scrappy characters with grit who love all the people who are drawn to this great sport.”

Hope in a Box – Food for Seniors