The Royal Street office of French Quarter Realty is an inviting mix of casual, yet chic; homey, but still commercially functional. However, it wasn’t always that way. Owner Michael Wilkinson tasked Jensen Killen and Katie Logan Leblanc of Logan Killen Interiors with transforming the disjointed and diminutive 683-square-foot space into a satellite office where a couple of agents could work, meet with clients and entertain. The space also would serve as a gallery of sorts for Wilkinson’s extensive art collection.

Killen and Leblanc set forth to uncover the bones of the centuries-old building, which were buried beneath decades of ill-conceived redecorations, renovations and reconfigurations. They then began stripping away the bad and highlighting the striking original architectural details.

“All of these things really set our intention: To create a clean, open space that felt part office, part art gallery and part residential,” says Killen. 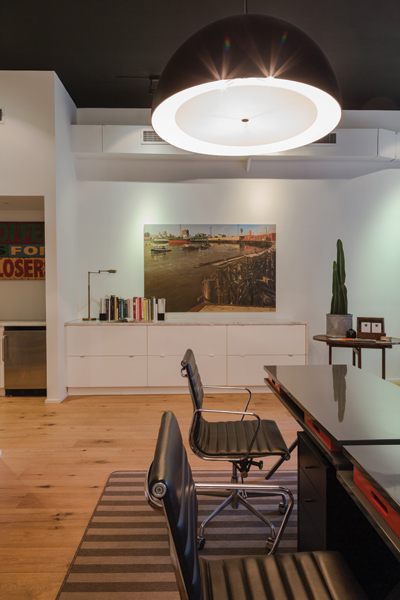 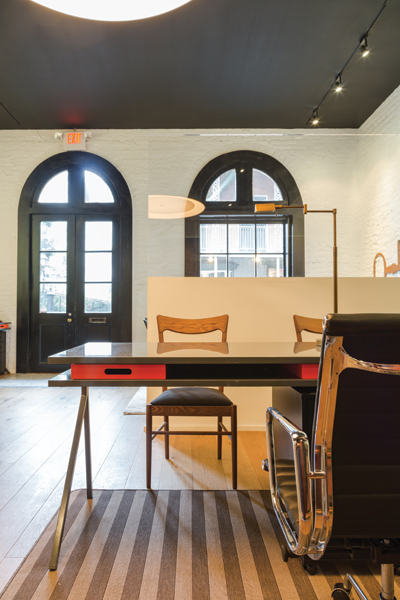 LEFT: French Quarter Realty’s 683-square-foot space on Royal Street, which features gallery-style white walls, also serves as a gallery of sorts for owner Michael Wilkinson’s extensive art collection. RIGHT: Designers Katie Logan Leblanc and Jensen Killen of Logan Killen Interiors worked to give the small space a high level of function. Wide-plank, white oak wood floors and a mix of contemporary, modern, Danish and mid-century modern furnishings in a variety of finishes warm up the space and soften the harder edges of the architectural elements.

The designers painted the exposed brick walls white to highlight Wilkinson’s art collection and evoke the gallery vibe. Wide-plank, white oak wood floors and a mix of contemporary, modern, Danish and mid-century modern furnishings in a variety of finishes from local and national retailers, such as Modern Market, Uptowner Antiques, Hive Modern, Restoration Hardware and West Elm, warm up the space and soften the harder edges of the architectural elements. The biggest challenge, however, was working with the size of the office.

“It’s a small space, and we needed it to function in a variety of ways, all while staying as open as possible,” says Leblanc. “So, we installed a low partition wall between the front lounge area and main office space behind it to provide some privacy for the agents, and installed a Plexiglas panel on the upper portion of this wall to maintain a visual connection to the street.”
The designers say that initially, Wilkinson wanted a three-desk setup in the main office area, but the layout didn’t work. By pulling the third desk out into the area by the front doors, it created a reception setup.

Another goal was to better incorporate the conference room into the space. The duo says that to achieve this, they kept the walls at 8 feet, so the build-out felt more like a component within the space, instead of a separate room. 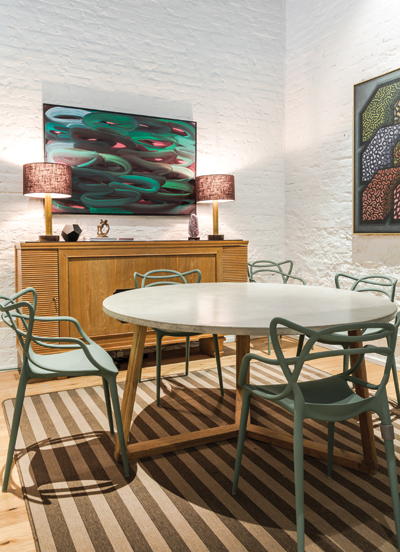 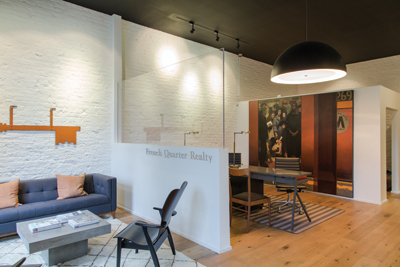 LEFT: Another goal was to better incorporate the conference room into the space. The designers say to achieve this, they kept the walls at 8 feet, so the build-out felt more like a component within the space, instead of a separate room. RIGHT: The black ceiling added continuity and makes the design pop while drawing attention to the architecture of the building.

“This allowed the ceiling to be continuous, keeping the lofty, gallery feel we were going for,” says Killen.

The decision to paint the ceiling black was twofold: It highlighted the architectural details and added contrast to the otherwise clean, white palette. The overall palette of the space was inspired by the client’s art collection, which he plans to rotate at his discretion.

Concrete and wood, metal and upholstered goods, brick and glass come together to create texture and visual interest. The arched windows and doors are trimmed in black, at once complementing the black ceiling and drawing attention to the architecture, as well as outside into the bustling French Quarter. The project is a successful example of how to marry Old World elements with modern sensibility and flair, and what your real estate agent really means when describing a property as “cozy.”

Budget: $30,000 for furnishings, plus construction cost

Main goal: The client wanted a satellite office where a couple of agents could work, meet with clients and casually entertain.

Standout feature: The designers say the Avico Suspension Lamp fills out the space and ties together the components of the space. The lamp, coupled with the black ceiling, make the design pop.