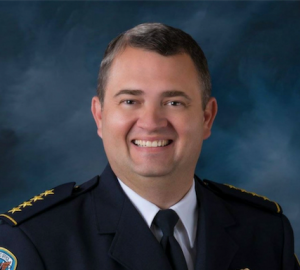 KENNER – At the Nov. 19 State of Jefferson event at Kenner’s Pontchartrain Center, Jefferson Parish Sheriff Joseph Lopinto said that, despite what you may hear on cable news or social media, crime rates are down in the greater New Orleans area and nationally.

“We always hear the term perception is reality,” he said. “A national study that came out last week shows that 80 percent of the population believes that crime is on the rise. We always talk about fake news and the truth of it is if you look at it the crime statistics in this country have been going down, down, down. And that’s true in Jefferson Parish. But the perception is crime is rising. Hardly ever a day goes by that if you live in Old Metairie that you don’t hear about a burglary in your area.”

Lopinto shared some numbers from the FBI’s Uniform Crime Reporting program, which for decades has gathered data from nearly 18,000 law enforcement agencies, to make his point.

In 1991, there were 31,000 reported crimes in Jefferson Parish. In 2019, the number had dropped to 11,000.  From January to October of this year, the official number is 7,943. Year over year, Jefferson Parish’s numbers are slightly up for violent crimes (40 murders instead of 38) but are noticeably down for robbery, burglary, theft and auto theft.

Despite the downward trend, citizens are more likely to hear about local crimes these days because of home security systems, the internet, social media, cell phones and neighborhood watch apps. That’s a big change from just a few years ago.

“Think about your house,” said Lopinto. “You lived there for 20 years. But walk out of your door, go ten doors down and tell me who your neighbor is. You have no clue. The reality of it is as much as we think we know everybody, we don’t, so even though that person ten doors down got burglarized ten years ago you didn’t know about it. They went to work and told their co-workers but you didn’t hear about it.”

Lopinto used an example of another story that went viral recently to show how quickly news can spread thanks to technology.

“You know we’ve always had in Old Metairie? Coyotes,” he said. “But a coyote got caught on a camera eating a cat recently and it became a huge problem after that because everybody was able to see it.”