As one of the largest independent liquids terminal and pipeline operators in the nation. NuStar is leading the industry by example through community service.

Vice President and General Manager of Operations for the Gulf Coast region of NuStar, Jean Zeringue, discusses volunteer opportunities and service projects with his team of managers on a daily basis.

“It’s one of our top disciplines in the company. We talk about volunteering five days a week. All the way from the top down, when we get together we spend more time talking about volunteer efforts than we do anything else,” Zeringue said.

The company requires every one of their 1,600 employees to participate in at least two hours of community service each month.  At the St. James Terminal, his home base, Zeringue says NuStar employees average about 100 hours of their own time spent volunteering a year.

“We believe our community should be better off because we operate here. No matter where we are, our communities should benefit from our presence in the community,” he said. “We have a very giving-spirited company, so we ask our employees to give back the blessing that they have been blessed with.”

The company’s volunteer ventures can range from a fundraising event, such as a golf tournament or a festival, to cooking a pot of gumbo for the hungry and donating backpacks full of school supplies to children.  NuStar supports their employees’ passions and encourages them to focus on the volunteer efforts closest to their hearts.

“We encourage our employees to get into the things that they get into. For example, we help with an annual golf tournament. Now I’m not a golfer, but it’s something they enjoy doing, and it raises a lot of money,” Zeringue said.

Zeringue recalls one organization that is dear to his heart, one that NuStar employees are playing a significant role in its success, called The St. James Arc.

The St. James Arc is a community center for people with intellectual and developmental disabilities.  About four years ago, the organization lost a significant federal as well as state funding.

“They were strapped and fixing to close their doors. And when we got wind of this, we were all in to help out,” Zeringue said.

NuStar employees assisted the Arc with organizing an event to fundraise The Arc back on their feet. For the past three years, the Annual St. James Arc Golf Tournament has accounted for a large sum of their yearly budget, Zeringue said.

“You would be amazed how many people may not give you money, but they’ll give you a hundred dollars to go play golf,” Zeringue said. “And then you can also have this community of people coming together and having fun at the same time.”

While there are some other companies give back to the community, Zeringue believes NuStar stands out even among those.

“We don’t do this for exposure; it’s just who we are. For us, it’s alive, it’s who we are, it’s not an afterthought,” Zeringue said.

For the past five years, Zeringue said 100 percent of NuStar employees donates to United Way – most often contributing a “trailblazers amount,” which is 2 percent of their individual gross annual income.

Throughout the past five years, he estimates that the St. James Terminal alone has given back at least $750,000 to the community.
In addition to the golf tournament, the St. James Terminal participates with raising money and cooking for local organizations in the parish such as teacher appreciation, backpack giveaways, senior citizen birthday parties, and even funeral services.

“We cook a lot of gumbos,” he said with a laugh.

“Giving is not natural, I’m finding that out. We have some employees that are not used to giving, but once they see the faces of those we are helping out, they change. I mean, how can you not be changed,” he said.

Between The Arc, United Way and a myriad of parish organizations, Zeringue says NuStar is truly a community-minded company.

“We don’t ask for recognition, we just genuinely care about our community and the members [within in it], it’s just who we are.. 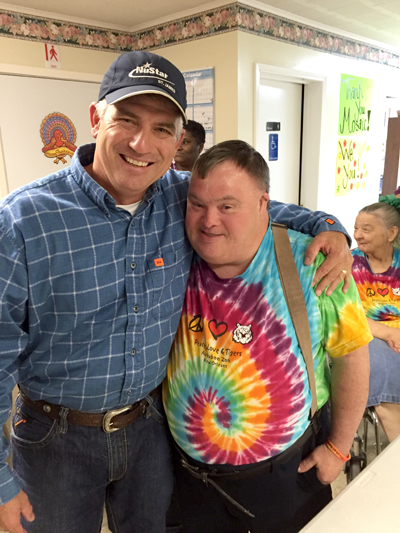