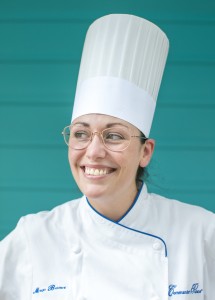 NEW ORLEANS – Commander’s Palace announced that Megan “Meg” Bickford will take over as executive chef at the iconic New Orleans restaurant. With over 12 years of experience with the Commander’s Family of Restaurants, Bickford started at Commander’s Palace in 2008 and previously served as the executive chef of Cafe Adelaide, the Commander’s family’s playful, modern Creole restaurant. In her time at the helm of Café Adelaide, Bickford was chosen as one of FSR Magazine’s “Rising Stars” and one of Louisiana Cookin’s “Chefs to Watch.” Bickford takes over the kitchen from chef Tory McPhail, who served as executive chef for 18 years. McPhail is trading in his Commander’s toque to move closer to family in Bozeman, Mont. where he will be leading the culinary career development for a restaurant group there.

“Walking into Commander’s Palace every day as the chef has been an honor,” said McPhail. “I have had the pleasure to work with the family on and off for 25 years, serving as executive chef for almost 19 years, and it has been my greatest work. I am leaving Commander’s Palace in the very able hands of the family and Chef Meg. I have worked side by side with Chef Meg for over 12 years and she has been eager and hungry for a long time now.  I couldn’t be prouder of her and I look forward to seeing her stamp on the legendary restaurant as it continues to evolve. I will miss this city that has become my home, the people here and the family environment at Commander’s Palace. It has been a helluva run!”