Come Get Some Kombucha

One local couple is putting their own Southern stamp on this trendy drink. 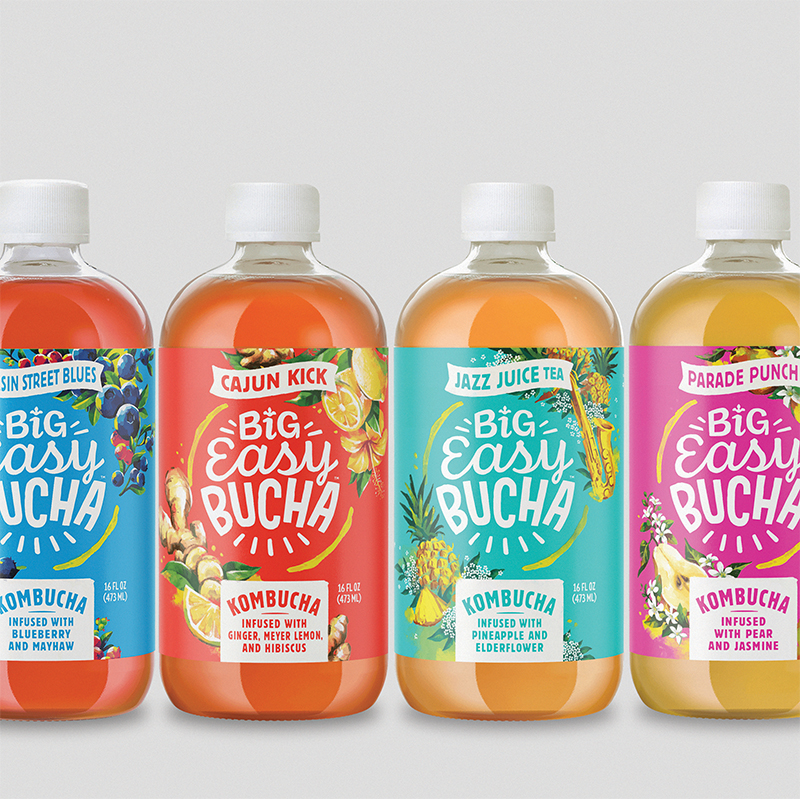 Something delicious is brewing on Euphrosine. Nestled between Earhart Boulevard and I-10, in what’s become an industrial, culinary corner of New Orleans known as “Maker’s Mile,” Austin Sherman and his wife, Alexis Korman, are creating their own bit of the American dream.

A mere six years ago, Korman stopped in at SoBou for a scheduled interview with the head bar chef for a beverage industry article she was writing. At the time, Sherman was tending bar there, so as she waited, the two struck up a conversation and discovered they had much in common, including a love for sparkling probiotic tea, kombucha.

Korman, once a self-described Diet Coke junkie, discovered kombucha a decade earlier while living in New York. She had become a vegetarian and a friend suggested she try the drink. Korman says she found it refreshing and was surprised by the feeling of well-being it gave her.

With a taste reminiscent of sparkling cider or champagne, the beverage can be traced back to China in 220 B.C. While kombucha’s probiotics promote gut health, the antioxidants, enzymes and vitamins also found in the drink add quite a healthy punch. Lab data supports kombucha’s antibiotic, antiviral and antifungal properties. The glucuronic acid it contains systematically detoxifies the entire body, working through the liver and kidneys.

Many enthusiasts home brew kombucha — something that Korman and Sherman had both tried before.

“New Orleans is such a culinary city in an agricultural state,” Korman says, adding that she and her husband’s version of kombuchas is “uniquely Southern.” On a cocktail napkin, the two began to dream up what is today Big Easy Bucha.

Big Easy Bucha begins with a base tea brewed using a proprietary blend of black and green teas sweetened with organic cane sugar. Once it cools, symbiotic cultures of bacteria and yeast are introduced to the batch. Fed by sugar, they create carbon dioxide, which causes a natural effervescence. As the tea ferments over 10 to 14 days, enzymes and probiotics are created. Various natural Southern ingredients are then added to create each of Big Easy Bucha’s distinct flavors.

Sherman’s background in bartending combined with Korman’s knowledge of the beverage industry, has led to a variety of creative taste combinations. Their first creation, Cajun Kick, combines ginger with local citrus and a pinch of cayenne. When the cayenne’s spiciness proved a bit much, a touch of hibiscus rounded out the kick. It remains a best-seller today.

Dedicated to supporting and giving back to the community they love, Big Easy Bucha uses only local fresh produce.

“Working with small farmers is the best part of the business,” Korman says, adding that one of their flavors, Bayou Berry, begins with strawberries from Fletcher Farms, where William Fletcher can often be found playing his banjo in the fields. “We buy his entire crop, juicing the strawberries at peak flavor for use year-round.” Big Easy Bucha’s head brewer, Paul Zeringue, is part of a family that has farmed citrus for generations in Taft, Louisiana. All of Zeringue Farm’s annual crop goes into a variety of Big Easy Bucha flavors.

Along with the growth of the business, Sherman and Korman’s family has grown as well. Almost concurrently with the move to the new facility, Korman gave birth to Lyla Day, who spent most of her first year at work with mom and dad. Little wonder that Big Easy Bucha’s newest product is Lil Easy Kombucha Shots. The homegrown company is first in the nation with an entirely new product for those who want their kombucha in a single swallow. The concentrated product is aged longer, giving it a tart, slightly more acidic, non-carbonated profile with an unctuous mouth feel.

Stop by Big Easy Bucha to see what all the fuss is about. Guests can sample all varieties available there on draft and fill up a growler to take home. Luckily, that 64-ounce jug is refillable, because you’ll be back for more!