With A Sock Swag Style

Cleveland Spears III still remembers the day he was on jury duty when a dapper attorney behind the defense table crossed his legs and showed off his canary yellow socks.

”He was wearing a traditional navy blue suite with a white shirt, but it was those yellow socks that struck my fancy,” he says. “I immediately thought his socks were cool and decided right then and there to create some sock swag for myself.”

“I may have a rather traditional conservative look one day and something very risky and trendy the next day, and both days you will find me wearing my colorful socks that have become a signature part of my daily dress.”

For those trendy days you may find him in a colorful wine blazer, a white dress shirt, sans tie, and blue jeans. “The secret is to know when the day calls for GQ fashion, or Rolling Stone chic,” he says.

From fashion to business, Cleveland marches to his own drummer. Spears Group, the company he founded in 2008, touts its philosophical approach to the public relations business in these words: “We were in the forefront of early adopters of the philosophical approach that relies more on digital content marketing, while still having an unyielding base of traditional public relations and media expertise,” he explains. “We understood early on that consumers now have more power than ever on how they receive their information, and we accepted the challenged to find new, innovative, fun, and engaging ways to get our clients’ message to them in the manner they want to receive it.”

Cleveland is proud to have been the first African American to ever receive the distinction of being named the “Agency Executive of The Year” by the New Orleans Ad Club last year. “It has been a source of pride to grow a firm in an industry that has been historically underrepresented by African Americans,” he says. “Our company has a pristine reputation among current and previous clients, and society in general. We are also proud that we have been able to make meaningful investments back into our community with our time, talent and treasure.”

The firm was named “Firm of the Year” by the International Association of Business Communicators in 2013, and has received many other awards from the Public Relations Society of America and the New Orleans Ad Club. 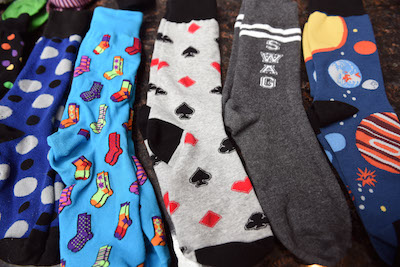 Born in New Orleans, Cleveland has a bachelor’s degree in marketing from the University of New Orleans School of Business. “I worked full time most of the time I was a student at UNO, attending classes from 6 until 9 p.m., Monday through Thursday, and every Saturday morning,” he says. “It was a grueling schedule that taught me discipline and time management.”

Along the way to becoming a successful businessman, Cleveland added his playful signature style of wearing colorful socks. “Now everybody notices my socks and I get them as gifts from friends, family and the staff at Spears Group,” he says. “I never pass the sock table at Marcy’s, Dillard’s or Steinmart without something unique catching my eye.”

And where does he keep his socks? “I stash my fun socks in a top drawer in my bedroom or in the laundry room, since I don’t always get around to folding them and putting them neatly away,” he says. “I just pull a pair from the hamper in the laundry room and I am off to conquer the world with my sock swag.”