And Her Dorothy Parker Style

Claudia Baumgarten has always loved vintage clothes. “My love of all that is old can be traced back to my mother’s parents who came from Italy and lived in an Italian enclave in Easton, Pennsylvania, and my father’s parents who emigrated from Germany in 1933 and settled in Philadelphia. I admired both sets of grandparents and I can still vividly recall the old, red, plush-velvet sofa in the Easton home, where my grandmother stashed her bottle of red wine under cushions.”

Today Claudia has taken on the persona of Dorothy Parker (1893-1967) in her one-woman show she calls, “Wit and Wrath: The Life & Times of Dorothy Parker.” Described by Claudia as a wit, social observer with an acid tongue, a biting critic of the rich and complacent, a compassionate advocate for the less fortunate, and a brilliant writer in many genres: poetry, book and drama reviews, short stories and film scripts, Dorothy comes alive with a skewered martini in hand as we learn more about her. “I strive to bring the most widely read and quoted woman of her generation alive as my edgy script tells of her plays, books, society and sex life,” Claudia says.

Dorothy was known for her fine clothing. “My outfit for the show is pure 1940s vintage,” she says. “The dress and hat are glamorous and perfectly fit her character.”

Miss Claudia’s Vintage Clothing & Costumes, on Magazine Street, is Claudia’s successful shop that is also the source of the interesting clothes she wears when she performs with her numerous musical groups that include “Miss Claudia & Her Biergartners,” that pays homage to her father’s German roots by playing traditional Oktoberfest music each October.

Claudia has shared her Dorothy Parker show with audiences at the New Orleans Fringe Fest, the Tennessee Williams Literary Festival in 2015 and 2016, and at Margarita Bergen’s Round Table Luncheon at Antoine’s Restaurant, a take-off on Dorothy’s famous Algonquin Hotel Round Table in New York City. 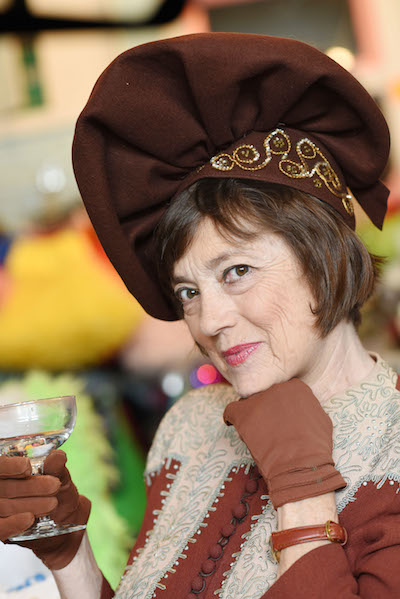 Her move to New Orleans came about as a result of her first trip when she was 19 years old. “I was immediately smitten by the Old World buildings, the smells and feel of New Orleans and the gigantic palm trees,” she says. “I wanted to drop out of college, but my father insisted that I continue my education so I applied to Sophie Newcomb College for Women and was accepted. Moving to New Orleans changed the course of my life. I graduated from Tulane University with a degree in German, and I will complete my second degree from the University of New Orleans in music in December 2016.

“I am still very much in love with New Orleans and it has been wonderful developing a pastime of collecting clothing with New Orleans labels from noted fashion shops, such as Gus Meyer, Godchaux’s, Maison Blanche, Kreeger’s and Kraus, that no longer exist. I consider my job to gather and preserve vintage clothing, share what I collect with my customers and wear the grand vintage clothing of the city’s past by always keeping some of the great pieces in my private closet. 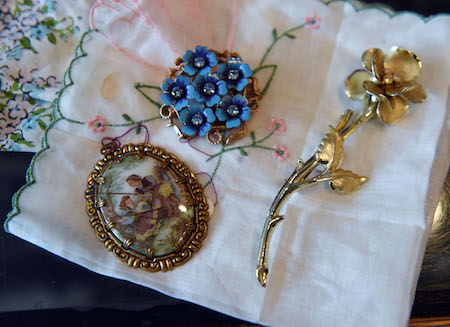 I have learned that many people don’t want to give their family’s clothes thrift shops. They truly want their old clothes to be enjoyed by people who appreciate them.

“I am proud that I have dressed everyone from drag queens, to Uptown conservatives, to Bywater Bohemians, to Catherin Zeta-Jones, who shopped at my store, and along the way I have accumulated my own closet of treasured vintage clothes. This is definitely part of living the good life in New Orleans.”