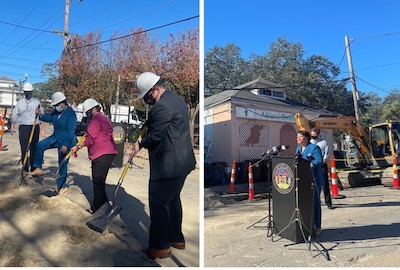 NEW ORLEANS — The City of New Orleans broke ground this week on the $6.1 million FEMA-funded City Park Group A project in District A. The funding is split nearly in half between Department of Public Works at $3.3 million and Sewerage and Water Board at $2.8 million.

“This is one of our larger projects in the City Park neighborhood, and it is another example of how we have prioritized infrastructure improvements across the City of New Orleans,” said Mayor LaToya Cantrell. “It will activate $6.1 million worth of infrastructure dollars of our larger spending on roadwork. … We know this will bring overall improvement into our neighborhoods and better streets for our city.”

The City said construction began on the project in September 2020 and will include work on waterline replacements, roadway repairs, and installation of Americans with Disabilities Act-compliant curb ramps at intersections. The project will impact 21 different streets and 64 individual blocks in the City Park neighborhood and is expected to be completed by late 2021.

The City said this is one of 62 active Department of Public Works projects valued at nearly $416 million. At the close of 2020, there will be a total of $585 million worth of joint infrastructure projects going out to bid.