Children of the Recession

Lower birth rates over the past several years may present challenges.

Kids are wonderful. They’re also really expensive: Between housing them, feeding them, toting them around, educating them, and doing everything else parents need to do to ensure their well-being, the USDA estimates that the average annual cost of raising a child is about $25,000. Indeed, along with choosing a career and buying a home, having a child is probably the most significant financial decision most people ever have to make.

It should come as no surprise, therefore, that broader economic conditions play a large role in the number of children born in any particular year. When the market is up and pockets are full, people are relatively more comfortable with the long-term financial commitment required of parenting. When there’s volatility and insecurity, more people are averse to it.

So while the Great Recession is largely behind us, it will have at least one important long-term impact—fewer children. In 2007, 4.3 million births occurred in the United States, according to the Centers for Disease Control and Prevention. By 2010, that number had declined to just under 4 million, and continued to drop to a low of 3.9 million in 2013.  In fact, 2014 was the first time the number of births increased over a previous year in seven years, and that growth was marginal.

Put another way, the number of children born in 2013 was about the same as it was in 1998, despite the fact that the nation’s overall population had grown by over 40 million.

The good news is that in Louisiana, where the effects of the recession were generally milder, the number of births did not drop quite as precipitously. In 2007, 66,301 children were born throughout the state, a rate that was very close to the pre-Katrina average. By 2013, that number had fallen to 63,201. That’s a 5 percent dropoff compared to the 9 percent decline nationwide.

The trends in the New Orleans metro area are a bit more nuanced. In Orleans Parish, the number of births rose 15 percent—from 4,093 in 2007 to 4,687 in 2013. But this is largely a result, of course, of the fact that the city’s population has increased significantly each year since Hurricane Katrina. A more realistic (and more sober) statistic is that while the number of births has grown by 15 percent, the overall population has increased by 41 percent. So, whether because of economic conditions, demographic trends, or, more likely, both, the annual number of births has not kept pace with the growth of the city’s overall population.

The overall effect, unfortunately, is not trivial. According to data from the U.S. Census Bureau, there were 1.27 million fewer children under the age of 5 in 2014 than in 2010. Likewise, there were about 6,700 fewer children in this age range in Louisiana about 1,100 fewer in the greater New Orleans area. The numbers from Orleans Parish are a bit skewed because of post-Katrina population recovery, but between 2012 and 2014, the number of children in the city under the age of 5 fell by over 900.

While the recession is not the only explanation for these trends—birth rates and average household sizes have been shrinking steadily for at least a decade—it certainly exacerbated them dramatically. A sizable population cohort, at least seven years’ worth, will be substantially and irretrievably smaller, with significant implications for the sizes of schools, the labor force, the tax base and other key economic areas. This isn’t doom and gloom, of course; there are, generally speaking, plenty of people.  But it will require some adjustments and creative solutions, some immediate and others long-term. 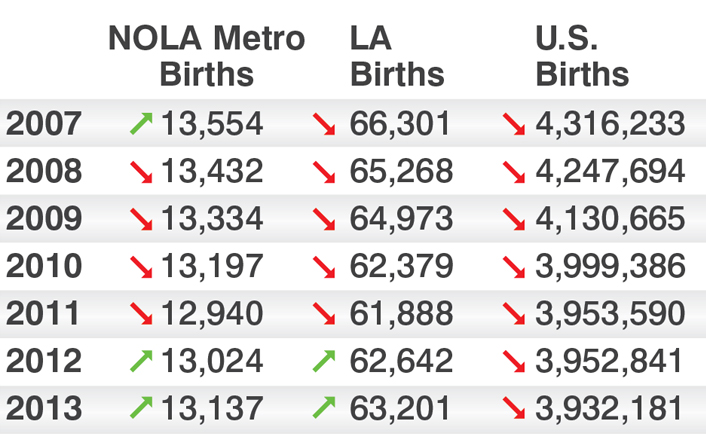