And Her Collection of Headwraps

Chef Tzarine, who only uses one name, is a chef who expresses her personal style by wearing colorful headwraps, or turbans, when she works.

“I always felt that the headgear for women chefs left a lot to be desired,” she says. “One day as I was walking through the French Quarter, I saw a Creole woman dressed like voodoo priestess Marie Laveau setting up her tarot table. She was wearing a colorful turban and I stopped and asked her to show me how she wrapped it. She graciously told me and also explained how I needed to pin my hair down to make it look right.”

After getting instructions on how to create a turban, Chef Tzarine went home and cut up a pillowcase to make her first one. “I immediately adopted a turban as my new style for what I considered was a perfect chef’s hat,” she continues. “Subsequently, I found lovely colorful scarves that were perfect for my headwraps and now I have a wonderful collection.”

A busy chef who has worked in the kitchens of La Boucherie, Broussard’s, The Italian Barrel, Doris Metropolitan and Cake Café, today she works with chef Neil Anthony Thibodaux, known as chef Nino, who is the spokesman for Rouses Supermarkets. He also represents Humana, educating people about how to make better food choices for good health. “I work as his sous chef on his Rouses job, although I am not on-air with him on his WGNO-TV shows each Tuesday and Friday, at 6:30 a.m. and 11:30 a.m, I do work with him on Humana assignment when he does food demonstrations that illustrate how to prepare delicious healthy food.”

A free spirit in every sense of the word, Tzarine arrived in New Orleans in 1987. “I was drawn to the city after reading Ann Rice’s ‘Interview with the Vampire,’” she says. “I couldn’t put it down. I didn’t want the story to end. Reading the book gave me solace. Soon I decided to look for vampires in New Orleans.”

She says she had no idea about the culture of New Orleans, Mardi Gras, Dixieland Jazz, or eating shrimp with the heads on when she first arrived from the East Coast where she had always lived. “It wasn’t long before I accidently stumbled into La Marquise Patisserie on Charles Street near Jackson Square and found a French gentleman behind the counter. I speak French fluently, so he and I began to talk. I sat down with my pastries and got so excited about how authentic the textures and flavors were that I went back to the counter, pounded my fist and demanded to work for him.” 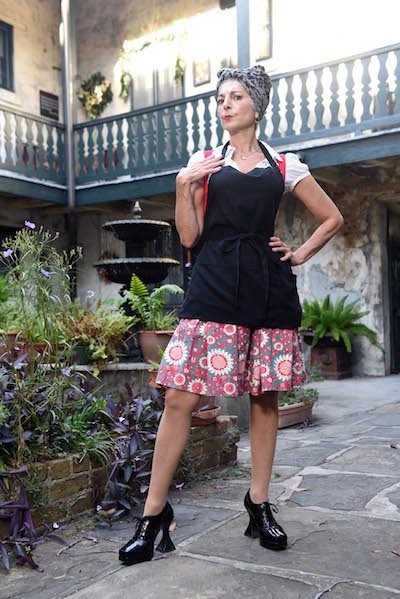 Fortunately, Maurice Delechelle, the French baker who owned the business agreed to give Tzarine a chance. “I started as the counter girl and stayed for 11 years. When I was approached by the owner of La Boucherie, a restaurant a few blocks away on Chartres Street, to fill in while his chef would be gone for a week, I couldn’t say no. Most of the time I worked at La Marquise, I lived above the pastry shop where I became known as an imaginative gourmet cook and had great dinner parties in my upstairs apartment.”

She unabashedly says having grand dinner parties where people raved about her food was the closest thing she ever experienced to being royalty. “I prepared lavish meals and word about my gourmet cooking skills soon spread,” she says with pride. It was also a time that she decided to go back to the owner of a 1956 Panhead Harley Davidson motorcycle she had seen earlier in Gretna and told him she wanted to purchase the Harley. “I was already driving motorcycles and I had fallen in love with that particular Harley when I saw it in the 1994 movie ‘Pulp Fiction’ and I knew I had to have it.” She completely restored the classic Harley and soon she was making heads turn when she drove it down the narrow streets of the French Quarter with the exhaust roaring.

From counter girl to chef was a natural transition for Chef Tzarine. “Once in the kitchen of La Boucherie creating delicious food and making people happy, I knew that I wanted to be a chef. When the chef came back from his trip, the response from the people who had been eating my food and my strong desire to stay left that chef out in the cold. I took over and created a menu with exciting specials everyday. Unfortunately, Hurricane Katrina ended the life of the restaurant.”

Today Chef Tzarine is happy she never looked back once she was given the opportunity to work in a New Orleans restaurant. She proudly enjoys her unique style of wearing a colorful Marie Laveau-inspired turban as part of her kitchen garb, and you will never find her wearing anything as boring as a white starched uniform to go along with her colorful headwraps. 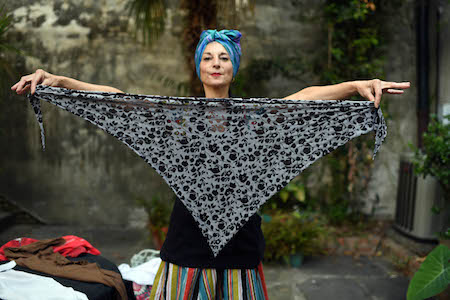 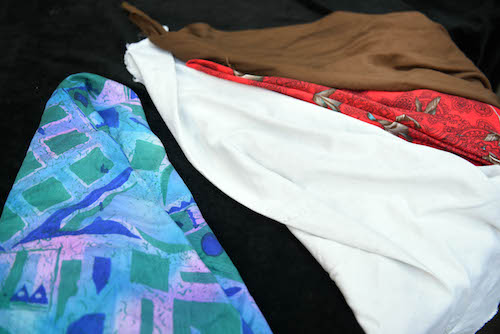